Covid Days on 26th and Folsom

Originally published as "Good Times and End Times on 26th and Folsom" at The Nation, November 25, 2020

I’m standing near the sunny corner of 26th and Folsom, two blocks from my writer’s cave, across the street from the projects and down the block from my birthplace, in San Francisco’s Mission district.

The projects are surrounded by apartments that used to house big immigrant families—up to a dozen members in my family’s case—apartments that now house the DINC (dual income, no children) people, who also own the Victorian duplexes priced from $1 million on up.

Two men, Seyfu and Ricky, are kicking back smoking a blunt in front of the small gray apartment building that houses Iglesia Arca de Dios, the Pentecostal church that’s been reviving the Holy Spirit three to four days a week since I left the Mission for wartime El Salvador in 1990. 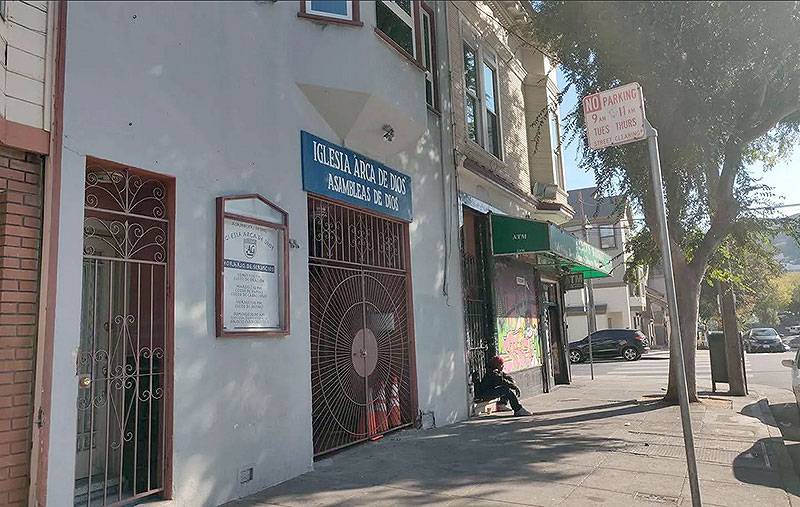 I approach them, hoping they can give some small sense of how Covid-19 has hit the old hood. The most visible indicator: It’s 3 pm and there are no people on the street—no kids coming home from school, no Mexican and Salvadoran moms pushing baskets with food or laundry, no groups of men hanging out on the corner. Just Seyfu and Ricky, standing next to the church.

I look at the church. Images of the Salvadoran and Guatemalan migrants who once packed it rush to mind. They first came to the Iglesia seeking solace from the apocalyptic ravages of war. These days, immigrants come for other reasons. Clients at the Clínica Martín-Baró mental health center, founded by my friend Felix, tell social workers their main fear is that they will be uprooted because they can’t make the rent. Local children echo this sentiment in a poetry collection filled with stories of being pushed out, or of robots protecting their families from evil landlords. At the church, the booming voice of the 5’2″ pastor provides succor.

“Who are you, bro?” Seyfu asks hesitantly, his muscular body tightening as if getting ready to light me up, if necessary. Ricky stands quietly, looking more chill and pretty high. Their eyes move up and down my leather-jacketed body to see if I’m friend, foe, or fucking cop. Neither of them is wearing a mask. I am. The wondrous perfume of the legal kush they’re smoking wafts through the air with a freedom I never knew back when I dealt joints and nickel bags of Colombian and skunk weed that, by comparison, smelled like dirty tube socks.

“I grew up down the street, near the corner of 25th,” I quickly respond.

“Yeah? So, if you went to Horace Mann, who was Mr. Sullivan?”

“You mean Sullineck?” I say, referring to the nickname some of us gave Horace Mann’s truant officer because of the blob of pinkish white flesh that occupied the space where his neck may once have been.

“Aw, fuck!” Seyfu exclaims, as he steps back and cocks his head, laughing in a gesture of surprise. “This dude is the real Horace Mann deal! What up, bro? Whatdyu need?”

“I’m just here trying to understand what daily life is like now, especially with Covid.”

“Well, there been a few cases in the projects, but it’s been chill.”

In February, San Francisco became the first US city to declare a state of emergency in response to the virus, thanks to Mayor London Breed, who grew up in a Western Addition housing project. Breed’s model Covid response is guided by veteran doctors and scientists who garnered great experience back when the AIDS epidemic ravaged the projects down the street. Sadly, Breed’s housing, policing, and other policies are guided by Big Real Estate, Big Finance, and Big Silicon, whose greed has gentrified the Mission, exacerbated homelessness, and defined the city’s inhumanely shitty response to these and other crises that are hollowing out gorgeous San Francisco, exiling poor Black and brown people.

“The thing that hasn’t been chill are the cops,” Seyfu continues. “They still on everybody’s ass.”

“They can’t bother us about weed anymore,” he says before taking a hit off his joint. “But they goin’ crazy about crack, heroin—and guns.”

“Has Covid slowed down the pace of people getting shot?”

I think on how relative the ideas about violence and calamity are as I walk around to look at the church founded by Central American war refugees.

Homicides in San Francisco are down. Way down. On the very day Donald Trump and William Barr were raging in the Oval Office against MS-13 last July, escalating the rhetoric and legal persecution by labeling its members “terrorists,” I interviewed members of the SFPD’s gang unit. They told me that MS-13 in the Mission had killed all of two people in 2019. Zero this year. Meanwhile, Covid has killed 154 in San Francisco County since March, low for a population this size, though there’s a spike in new cases now. In the city, the Mission has endured the highest number of those since mid-October, and the hottest spot in the district is three blocks from 26th and Folsom.

In front of the church dozens of ancient pieces of discarded bubble gum are embedded into the concrete, blackened from years. The sidewalk there has the misfortune of being next to Rubin’s Market on the corner. I remember when kids and adults would come out of Rubin’s chewing gum, hang out in front of the church and spit out their gum. I remember when the gum was fresh pink and purple, cuz I was one of those kids.

Rubin’s was also one of the major centers of the black market in the Mission. Rubin was my father’s black market mentor.

I look at the church and see myself as a deacon who turned to Jesus as a way to redeem myself from the shame of my father’s—and my—criminal dealings.

“They just started havin’ services again,” Seyfu tells me. “Things gettin’ loud around here.” Apocalyptic preaching became a sign of better days under loosened Covid restrictions. Since the spike in infections, things have tightened up. The church meets less frequently, but, when it does, the high-volume voice on the hulking loudspeakers rages about End Times every Monday, Tuesday, Friday, and Sunday, as it has for decades.