Conversion: The Limits of the Soft Sell

Proponents of conversion organizing consider it the linchpin of a political strategy that can undermine the economic attachments binding workers, especially in the defense sector, to the military/industrial state. They assert that it can "uncouple" these workers from the official version of national security, that it can undercut their personal stake in the "Soviet threat," that it can destabilize the pantheon of anxieties used to manipulate the American population. 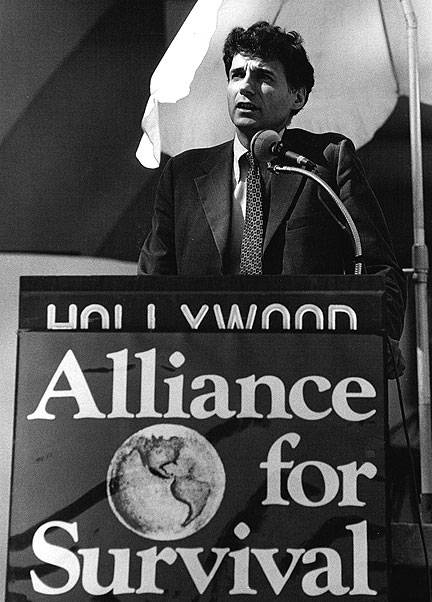 Ralph Nader speaking at an Alliance for Survival rally, 1980s.

As an organizing strategy, conversion aims to expand the antimilitarist coalition by specifically addressing "labor." It hopes someday to involve large numbers of workers in the articulation of alternative plans and the development of a political movement strong enough to make economic conversion a real option. For the present, in the absence, of a workers movement interested in such esoterica, conversion activists make do by forming alliances with labor union officials and by, developing alternative use plans without a great deal of rank and file involvement.

The short term goal of many conversion activists is to form a coalition, of social groups that together will wield enough political strength to force a retreat from warmongering and empire building. But the chasm between the economic alternatives and the social movement capable of forcing their implementation is wider than some realize. No simple “realignment pf priorities" will bring true conversion—it diverges to far from the heavy metal world of transnational capital. Instead we will get "reindustrialization" -- massive subsidies to sagging corporations for more of the same technologies of dependency and control, with the bill going to the workforce and the poor.

Instead of, rebuilding the railroads, solar development and the reconstruction of the cities, we will get continued increases in military spending. And military development is intended not only to stabilize profit rates -- weapons are built to be used, and our rulers seem intent on policies that will require the massive use of force.

As a political and educational strategy, conversion must be measured against the methods and manipulations used to justify military intervention, legitimate nuclear brinkmanship and control the US population. How will the struggle to convert military industries interact with the general politicization of the American working class? How will the frustration that is sure to be experienced by workers wanting to make "socially useful" commodities be channeled into an understanding of the underlying structure of the economic system? Why will defense workers familiar with the rhetoric of conversion be any less easily manipulated by the Russian “specter?"

Conversion may help to undercut the economic blackmail by which military workers are kept subjugated to the needs of the corporate military complex, but economic blackmail is not the only key to the control of populations. National chauvinism and jingoistic fear are as important, and any disarmament movement that fails to confront them directly has no chance of undercutting the structure of control.

Panicked by the need to build a majoritarian movement, and unwilling to be red-baited into obscurity, political activists in this country have adopted a populist style which carefully avoids the jargon of a largely discredited socialist movement. But in seeking to avoid identification with the Commissars, many have traded away the most basic tenets of socialist radicalism. Instead of new communal social relations, they offer us a vague prescription called "economic democracy." Instead of learning to criticize capitalism in an attractive and modern way, they fall back on demands for increased "corporate accountability.”

Respectability, once a subterfuge aimed at winning access to the hearts and minds of middle America, has become a goal in itself, purchased at a very dear price.

Unfortunately, the conversion movement rarely challenges the real goals of American foreign policy or stresses the deeper political and economic forces behind the arms race. Like the mainstream of the disarmament movement, it presents weapons systems in isolation from the calculated policy of international domination. It. does little to encourage the American people to acknowledge their common .interests with Europeans, Japanese, even Russians, for it paints our commonality only with the broad strokes of apocalyptic humanism. Instead of internationalism, the only framework within which we can hope to confront both transnational capital and the, belligerence of the national state, the conversion movement stresses the immediate benefits of economic conversion.

Some of the Lucas literature recommended mass-produced "appropriate technologies" designed for export to the Third World as a means of improving England's balance of payments deficit. Seymour Melman, one of the chief spokesmen for conversion in the US, makes a blithe equation between expanded social services and the increased competitiveness that economic conversion would mean for US firms on the world market. The conversion movement sometimes stoops so low as to bemoan new military buildup because it costs too much, and thus damages "our" economy. Labor movement spokesmen go unchallenged when they argue that alternative economic development is a great way of creating and securing "American" jobs.

"No anarchy in my union"

The conversion movement began in England within the shop stewards' committees at Lucas Aerospace. While mostly integrated into the union hierarchy; these committees retain a shadow of the autonomy they won, in the dim radical past of the British labor movement and still provide some alternative to the unions.

In the US there is no such alternative. The unions are degenerate organizations, as hierarchical as management and required by law to enforce repressive labor regulations. Even radicals within the unions are so bound up in the logic of bureaucratic control that they are incapable of supporting increased rank and file control. William Winpinsinger, president of; the International Machinists' Union and high-profile member of the Democratic Socialist Organizing Committee, is an excellent example. A few years ago when an initiative for direct election of business agents in Northern California succeeded, Winpinsinger lost no time in using the powers of his office to reverse the local vote. The editors of a local rank-and-file newsletter quoted Winpinsinger as commenting, "I will not tolerate anarchy in my union."

The end of the thin line

Conversion advocates walk a thin line, hoping that their strategy will help to revitalize the labor movement while they shy away from public criticism of what the unions have become. But they will not be able to avoid the problem forever if they take seriously their own intention of using conversion planning as a vehicle for democratizing the workplace.

The unions are no more eager than management to allow true shopfloor control. If conversion ever gets taken up as a union issue it is likely that alternative use plans will be developed by committees of professionals in the union internationals while, the average worker is completely excluded.

There is a long and unsavory tradition in the radical movement that reduces an issue to its purely economic aspects in order to broaden its appeal: The conversion movement falls into this trap, focusing too narrowly on the economic issues which bind individuals to the military/market complex and leaving unchallenged the political and ideological underpinnings of the American way of life. When next the Soviet threat is waved before our eyes, we will not-have learned to see it differently.