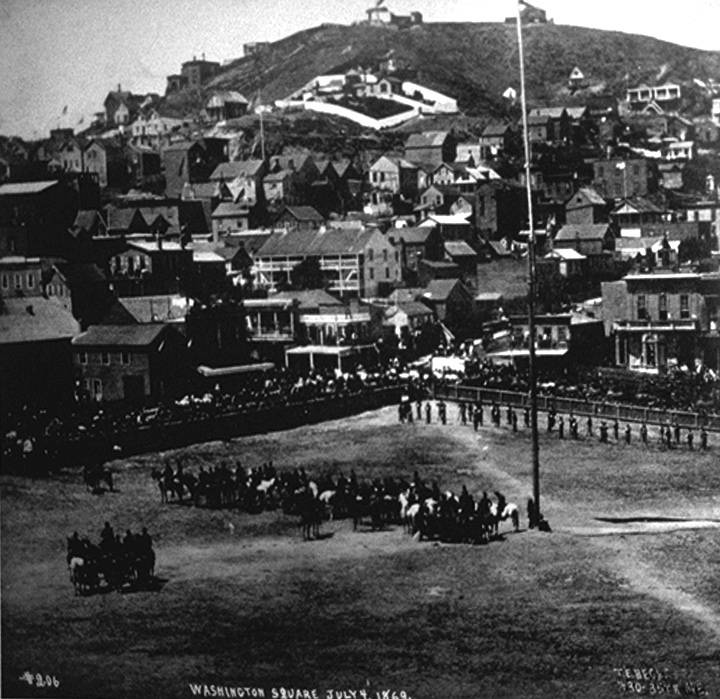 The Fourth of July being celebrated in Washington Square Park, 1869.

The heroic histories of early California have been fed to the state’s schoolchildren, and to the larger culture, since the first wave of American historians began to churn out the self-aggrandizing tales that were meant to exalt the first settlers while painting a simple story of inevitable progress. The real stories are quite a bit more complicated, and in key respects, the reverse of what we’ve been told. California’s jump-started economy in the middle of the 19th century was based not on hardy self-made men, but was based on an industrial model that required large amounts of capital and the abundant natural wealth without which California would have had a very different history. As Andrew Isenberg cogently puts it, “Anglo California’s economic development thus began with industry, later included agriculture, and still later invented wilderness.” (Mining California: An Ecological History, p. 164). The thousands of gold-seekers who rushed to California were themselves imbued with both the white supremacist ideology of Manifest Destiny, and the liberal belief in individualism and personal honor as the foundation of public life. Prior to the Civil War most white men were committed to a republic of individual producers, either small farmers or self-employed artisans and entrepreneurs. The corporation had not yet risen to the powerful position it would assume within a generation, and while plenty of people took jobs working for wages, few thought of it as anything but a transition on the way to self-sufficiency. As Richard White ably describes in his epic history (The Republic for Which It Stands: The United States During Reconstruction and the Gilded Age, 1865-1895, Oxford University Press: 2017):

Free labor depended on independence, and, as Lincoln had said, permanent wage labor signified “either a dependent nature which prefers it, or improvidence, folly, or singular misfortune,” but as the 1860s turned into the 1870s wage labor was becoming not a transitory stage in life but the norm. In 1873 the Massachusetts Bureau of Statistics of Labor proclaimed that wage labor had become “a system more widely diffused than any form of religion, or of government, or indeed, of any language.” Excluding farmers, wageworkers by 1870 outnumbered the self-employed. They did not sell the products of their minds and hands. They sold their hours and days. (p. 237)

It’s not even 200 years since the American seizure of California from Mexico. As Americans poured into the territory seeking their fortunes they aggressively sought to implant a political and economic order that ensured their own well-being and denied it to every everyone else. But they also faced the deep anxiety that accompanied the shifting economic world they were bringing with them, the beginnings of industrial capitalism and wage-labor. The mythological small farmers and self-made men found themselves dependent on wealthy investors and new business syndicates that employed them in seizing the natural wealth of California. While a few became unimaginably wealthy, most American California settlers were boxed in by lack of capital and a lack of land, forced to find employment with those who could command their labor with wages. 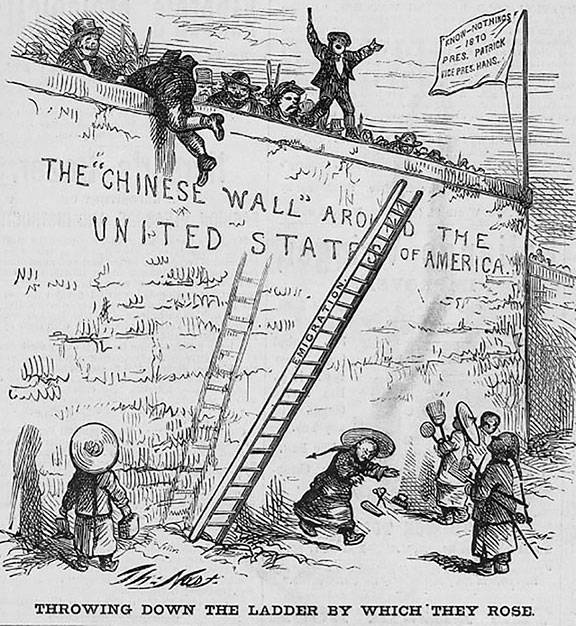 That first wave of settlers included many southerners who brought slaves with them. Even after California was granted statehood in 1850 as a “free” state, several thousand people of African descent were held in slavery with the backing of fugitive slave laws passed by the California legislature and approved by the California supreme court. But a growing majority of California’s white men, the only ones who could vote, were embracing the “free soil” ideology of the anti-slavery wing of the Democratic Party. The commitment to free white labor meant that any other group, for example, the thousands of Mexicans, Chileans, Peruvians, and other Spanish-speakers who arrived early to the gold diggings, had to be defined as occupying a different category of work. The push for a “foreign miner’s tax” that lasted until 1852 was designed to drive out the so-called peones, or peons, men who were paid a pittance and sent the products of their labor to their patrones, or bosses. The Spanish-speaking gold miners were defined as less than white men by this argument, and thus subject to violent expulsion. After 1852, when most Spanish-speaking miners had departed, the target of white miners was shifted to the Chinese miners. Before long a new claim was being made about the Chinese workers who had signed contracts and come to work in California: they were “coolies.” This process is well described by Stacey L. Smith in her excellent book Freedom’s Frontier: California and the Struggle over Unfree Labor, Emancipation, and Reconstruction (University of North Carolina Press: 2013):

...the question that peonage raised about the relationship between capital and labor, between wage work and slavery, between citizens and aliens, and between empire and exclusion did not disappear with the repeal of the foreign miners’ tax. Instead, white Californians transferred the class, racial, and national imaginings associated with peons to a new group of foreign-born laborers. Within just a year, imagined Chinese coolies took the place of peons and started to represent virtually the same threats and fears. The campaign for Chinese exclusion that emerged in California by 1852 had deep roots in the expulsion of Latinos that preceded it. (p. 94)

Smith offers a wider view of the struggle over different labor regimes during the pre-Civil War decade through the end of Reconstruction in the mid-1870s. Her argument penetrates the fraught beginnings of wage-labor in the pre-Civil War west, and how the struggles over the definition of free and unfree labor came to shape the national discourse by the end of Reconstruction in the mid-1870s. She includes detailed accounts of slavery in California, backed up with many examples and evidence from the press of the time. She goes through the legal battles in the state legislature that led to the passage of the 1850 Act for the Government and Protection of Indians and the fugitive slave law that together rendered California’s ostensible status as a “free state” a mendacious claim at best.