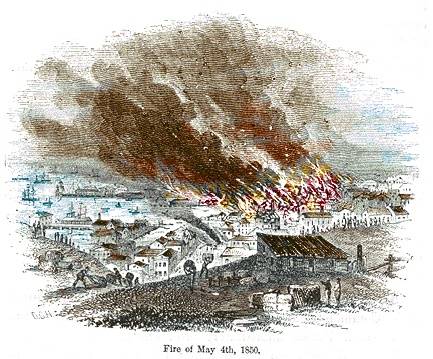 San Francisco burned repeatedly in the early years; this shows the fire of May 4, 1850, which destroyed a large of downtown.

In the course of the year 1850, upwards of thirty-six thousand persons arrived by sea in San Francisco. Of these fully one-half came direct from foreign ports, while many of those that crossed the Isthmus of Panama were likewise from foreign countries. By far the greater number of immigrants were adult males, as might have been anticipated. The most of these persons hastened at once to the mines; only staying a few days, or at most a week or two, in town to recruit their strength and make preparation for the digger's toil. Perhaps two thousand females, many of whom were of base character and loose practices, were also added this year to the permanent population, if that can be called permanent which dwelt at least a twelve-month in the city. The immigration across the plains and by land generally into the State was also, as in the preceding year, very large. Great numbers of all these sea and land immigrants, after they had been some months at the mines and made perhaps a few thousand dollars, returned by way of San Francisco, to their former homes. Many others, altogether disappointed with or unfit for the country, went hastily back to the places from hence they had come. Thus vessels leaving the bay, and especially the steamers, were nearly as well filled with passengers as when they had first arrived. This constant migration to and from the State gave a wonderful animation to the streets of the town. Many of the incomers remained in the place, and the regular population continued to increase. At the close of this year, the inhabitants probably numbered between twenty-five and thirty thousand. The Chinese had not yet arrived in any great numbers, but the Chilenos and other people of Spanish-American extraction continued very numerous.

The year 1850 saw a wonderful improvement in the aspect of San Francisco. Notwithstanding the conflagrations which had so often laid in ruins large portions of the city, or perhaps rather to some extent in consequence of them, the buildings in the business quarters were now remarkable for their size, beauty and solidity. The tents and shanties of last year had totally disappeared from the centre of the town, while many of the old frame buildings that had not been destroyed by fire were replaced by others of a larger and stronger kind, if not by extensive fire-proof brick structures. It is true that in the outskirts there were still numerous frail and unsubstantial habitations left, while, farther away, many more of the same kind were being weekly and daily added; but as population and the value of real estate and household property gradually increased, these temporary erections began to give place to more solid and comfortable buildings. Though labor still commanded high prices, during a great part of the year most kinds of building materials could be obtained at comparatively low rates, probably at an average of one-fourth or one-sixth of the prices of the preceding season.

While houses were thus changing for the better, an equal improvement was taking place in the character of the streets. If nature had given to San Francisco magnificent water privileges, she had certainly been very chary in bestowing upon it land ones. The site, immediately available for building operations, was exceedingly small, and it was only by the expenditure of a vast amount of labor that additional space could be obtained for the necessary extension of the town. The land around was very hilly and irregular, which had all to be made smooth and plain before proper streets could be designed and convenient houses built. Fortunately the obstructing hills were composed chiefly of sand and easily removed. The original tents, shanties and houses had just been placed upon the old uneven surface, high up or low down as it happened; but it was soon found, that if the city was ever intended by its inhabitants to grow to greatness, some method must be observed in bringing them more upon a straight line, with ready access between all parts of the place. Very expensive works were therefore ordered by the town council, to establish a regular and convenient grade to the streets, while these were in many places substantially planked, and in some instances had sewers constructed along them. During the summer of 1850, such alterations had been proceeded with to a considerable extent, and now, when the winter and rainy season approached, their utility was seen and appreciated by all.

Other material improvements were keeping pace with those of the houses and streets. Numerous well appointed wharves were run out into the deep waters of the bay, at which the largest vessels could lay alongside and discharge. Better regulations were continually being adopted by the harbor masters to facilitate the shipping interests. In the year just passed, six hundred and fifty-six sea-going vessels had arrived and discharged at the port. Of these, five hundred and ninety-eight were American, and fifty-eight of different foreign countries. The public offices of the city and State were removed to more commodious and accessible buildings. The towns around the shores of the bay and those situated on the Sacramento and San Joaquin Rivers could now be easily, rapidly and cheaply reached, by means of numerous large, strong and beautiful steamboats. All along the outer coasts, magnificent steamships regularly carried the mails and passengers. In San Francisco itself, many workshops and manufactories began to be established; and, if few articles of trade were manufactured from the beginning out of raw materials, at least extensive repairs could always be now made upon them. The important suburb of "Happy Valley," on the southern side of the town, became quite a hive of manufacturing industry, where there were many large works for the building and repairing of steam and sailing vessels, foundries, lumber-yards, docks, flour-mills and workshops of various kinds. Labor of every description was highly paid, and generally all branches of the community had reason to be satisfied with their profits.

The enormous gains of the preceding year had tempted those who partook of them to largely increase their shipments for 1850, while others, determined to share in the golden spoil, hastened to send additional goods to what was a limited market at best. The increased supply of merchandise soon affected the market, and prices in the spring of 1850 fell very considerably. There was a slight subsequent reaction in the course of the year, but towards the close, markets became more depressed than ever, and much embarrassment ensued to the mercantile class. This fall in prices, as well as the natural depreciation in the value of real estate from the former excessive rates, and the losses sustained by the many great fires, led to a monetary crisis, when a great number of merchants, real estate jobbers and others became bankrupt. One particular consequence of the excessive supply of goods was the sudden extraordinary increase of auctioneering business. When markets began to fall, and merchants found that their importations could not afford to pay storage and other charges, and still more, when commission agents desired to realize their advances, or were urged by foreign correspondents to sell at any price, then whole shiploads of merchandise were rattled off with a crack of the auctioneer's hammer. It seemed to be of little moment at what rate so that somehow the matter was fixed, accounts could be adjusted, and the distant sufferer made aware of the net amount of his loss. This was still farther the case during the succeeding year. The auction business was meanwhile becoming one of great importance, which it continued to be, and is now, in San Francisco. That system of disposing of goods possesses many advantages, among which are speedy returns, and in the case of brisk demand, perhaps also better prices than can be obtained otherwise, but, at a period of glut, it fearfully sacrifices the interests of the luckless absent proprietor of unsaleable merchandise. In 1850, and still more in 1851, these things could not well be helped by any party. Still, however great individual losses and sufferings might be, the general interests of the place were all this while steadily advancing; and this was only one of the severe ordeals through which every great city in its unexpected origin and speedy progress might be expected to pass.