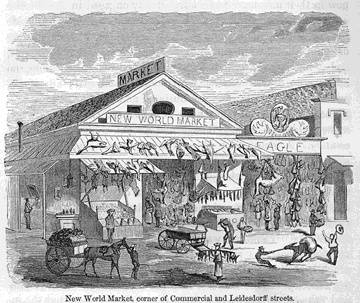 The fires of 1850 and 1851, while they destroyed much valuable property, led in the end to a very superior kind of buildingand may thus be said to have done some permanent good. They have stamped a wonderfully grand character upon the architecture of the place. What at first were called and believed to be fire-proof houses were becoming numerous, when successive conflagrations came and removed them all. Other houses were built of a still more substantial kind, and these were destroyed by fire in turn. At last some buildings were erected that surely were proof against the most intense heat and flame; and upon their models all the later structures of pretension have been formed. While in certain respects these buildings assume the proportions and grandeur of palaces, in others they appear heavy and gloomy like the veriest prisons. The walls are enormously thick, and the windows deeply sunk in them, showing often at first sight only narrow, dark cavities. When the ponderous wrought iron shutters and doors are closed on the outside the resemblance to a jail is complete. It is believed that no fire from without can seriously affect such buildings, although they may be subject to internal conflagration. While improved houses were rising in the centre and business portion of the town, superior buildings of frame were replacing, in the outskirts and suburbs the old habitations, or such as were destroyed by fire. The new plank road to the mission had opened up a large and valuable tract of building ground, and neat and substantial wooden houses were being erected along the whole way.

In the vicinity of the town, wherever a tiny fertilizing stream of water ran among the sand hills, at the mission and the presidio, numerous flower and kitchen gardens and small farms were laid out, which yielded large supplies of the more necessary or prized vegetables. In 1849, the announcement of a real cabbage at dinner would have set half the population frantic with strangely stirred appetites; now, the many cultivated spots named, daily furnished numerous loaded carts of all kinds of fresh vegetables to the city markets. Potatoes were no longer a rarity; turnips could be had for moneyand at a moderate price, too. The markets made pleasant morning sights. Besides a profusion of vegetables and fruits, they were largely supplied with noble fish and game of all descriptions from the ocean, the bay and the interior. Salmon of huge dimensions, and vast quantities of like delicious fish, whole cart loads of geese, ducks, quails, and other wild fowl, innumerable quarters of bear, elk, antelope, deer, and smaller game, loaded the stalls of the dealers. Mutton was perhaps not so plentiful, but excellent beef was in abundance. Times had changed with San Francisco. The hardships and semi-starvation of 1849 were forgotten in these ample supplies of exquisite food. The epicure might traverse the globe, and have no finer living than what this city yielded; the glutton would here find both eye and palate satiated. But two years had sufficed to this astonishing change.

The general improvements in the aspect of the town and social character of the people, noticed in the review of 1850 were still going on. New "Expresses" were hurrying to all points; stage coaches, mails and noble steamers communicated with the most distant quarters. Additional manufactories and stores, additional newspapers, theatres, public institutions, benevolent, useful and agreeable associations, were being constantly established. Schools and churches were springing up on all sides. A certain class largely patronized the last though it must be admitted that very many, particularly foreigners, never entered them. The old life and bustle continued, though matters were now systematized, and offered less show and confusion. In 1849, San Francisco was like a great anthill, when its busy creatures happen to be disturbed, and when all were visible, hurrying to and fro, out and in, backwards apparently in the most admirable confusion and forwards and cross purposes, as if every one were engaged in some life and death struggle. In 1851, the city was like the same ant-hill when the cause of fright had been removed and order restored. The old tenants were still as busy as ever, but there was method now in their actions. Some were closely engaged in the interiorthe cells or houses of the placeand made no show. Outside lines of other eager workers ran here and there, without jostling or confusion, all filled with the thought of what they had to do, and doing it well and quickly. There was no sauntering, no idleness, no dreaming. All was practical and real; all energy, perseverance and success. In business and in pleasure, the San Franciscans were fast folk; none were faster in the world. Their rents, interest on money, doings and profits, were all calculated monthly. A month with them was considered equal to a year with other people. In the former short time, men did such deeds, and saw, felt, thought, suffered and enjoyed, as much as would have lasted over a twelvemonth in other lands. But then these were really mengiants ratherthe very choice of the cleverest, most adventurous and hard-working people of America and Europe. California was a hot-bed that brought humanity to a rapid, monstrous maturity, like the mammoth vegetables for which it is so celebrated.

Annals of SF - Publisher or Photographer

Annals of SF - Publisher or Photographer