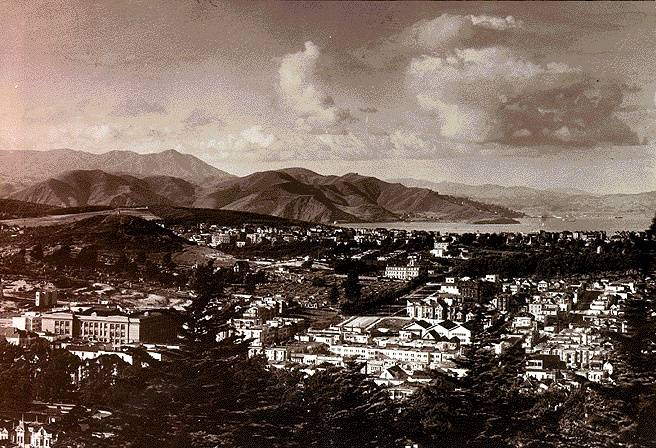 Looking northwest from Buena Vista's peak, circa 1913. Lone Mountain is first hill at left, then the Presidio, the Marin Headlands, and finally Mt. Tamalpais.

By 1970, the bottom had fallen out of the Haight Ashbury . . . Out of necessity, communes became much more well organized and the role of women expanded. Questions arose about childcare, the dishes, the cooking, the shopping.

An odd collection called the "Good Earth Commune," which at its height had close to 2,000 people and controlled more or less nine buildings, primarily around Oak Street next to the Panhandle and Cole Street. The Good Earth Commune was in many ways a prototypical Delancey Street, [a prisoner and drug abuser rehabilitation program renowned for its success, based on a heavy group therapy/discipline regime].

It took very anti-social people, and socialized them, even at times with legal activities. Childcare was organized. The Good Earth Commune became in many ways the genesis of the Food Conspiracy. The Food Conspiracy was basically a buying club which at its height in 1974-75 it had over 1500 households. All the work was collectivized. There was a cheese collective, a vegetable collective, the grains collective, they had the responsibility for purchasing those commodities, which they would then package and distribute, all of which was done on the basis of volunteer labor. Tremendous savings occurred, tremendous amount of brown rice and seaweed was passed out and it functioned for probably close to six years, providing literally thousands of people with relatively healthy food in a non-capitalist, cooperative way.