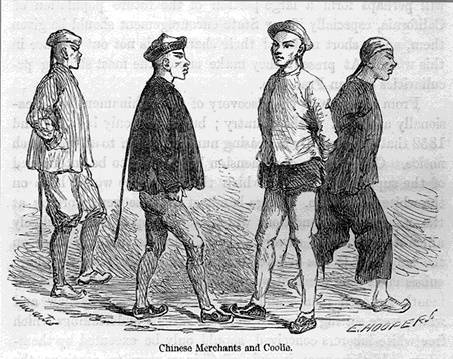 APRIL. The immigration of Chinese into California has greatly increased of late. By this month it was supposed that upwards of ten thousand of that people had arrived at San Francisco while as many more were estimated to be on the way. Considerable public discussion existed at this period on the desirableness of such a vast immigration of the race; and we take occasion to make some general remarks on the subject, as well as upon the present (1854) condition of Chinamen in the city.

The manners and habits of the Chinese are very repugnant to Americans in California. Of different language, blood, religion and character, inferior in most mental and bodily qualities, the Chinaman is looked upon by some as only a little superior to the negro, and by others as somewhat inferior. It is needless to reason upon such a matter. Those who have mingled familiarly with "celestials" have commonly felt before long an uncontrollable sort of loathing against them. "John's" person does not smell very sweetly; his color and the features of his face are unusual; his penuriousness is extreme; his lying, knavery and natural cowardice are proverbial; he dwells apart from white persons, herding only with countrymen, unable to communicate his ideas to such as are not of his nation, or to show the better part of his nature. He is poor and mean, somewhat slavish and is despised by the whites, who would only laugh in derision if even a divine were to pretend to place the two races on an equality. In short, there is a strong feeling, prejudice it may be, existing in California against all Chinamen, and they are nicknamed, stiffed about and treated very unceremoniously by every other class. Yet they are generally quiet and industrious members of society, charitable among themselves, not given to intemperance and the rude vices which drink induces, and are reputed to be remarkably attached to their parents revering indeed in all persons advanced years, which are supposed to bring wisdom. The Chinese, or certain large tribes of their nation, are of a migratory disposition. They have long since wandered over the many great and rich islands and countries lying around their own land, and have contrived to secure to themselves a large portion of the most valuable trade and commerce of these places. From Canton to Calcutta and Callao, to Melbourne and Manilla, they swarm in all the ports of the Pacific, and more especially in those of the great Malay archipelago. There seems a vast pressure upon the interior multitudes of China, which forces many thousands annually to leave the densely peopled country, for the sake of a bare subsistence, and to save starvation at home. Little food, and that of the coarsest and cheapest kind, suffices to support the life of Chinamen; and to procure that, they will drudge long and patiently at the most painful task. When in a foreign country they have contrived to amass a small sum, which may be considered a fortune by themselves, they generally seek to return to spend it, and enjoy the remainder of their days among kinsmen. This class of people will perhaps form a large portion of the future population of California, especially if any State encouragement should be given them and a short notice of their character is not out of place in this work. At present they make one of the most striking peculiarities of San Francisco.

From the date of the discovery of gold, Chinamen had occasionally appeared in the country; but it was only in 1851 and 1852 that their rapidly increasing numbers began to attract much notice. Considerable apprehension began then to be entertained of the supposed bad effect which their presence would have on the white population. Large bands of Chinese were working at the mines upon conditions which were supposed to be closely allied to a state of slavery. Much misunderstanding arose on the subject. It was believed that the gangs were receiving only subsistence and nominal wages--some four or five dollars per month for each man--and that speculators, both yellow and white, were setting them to work on various undertakings which free white laborers conceived should only be executed by themselves. If these vast inroads of Chinese were to continue, the white miner considered that he might as well leave the country at once, since he could not pretend to compete with the poverty-stricken, meek and cheap "coolie," as so John Chinaman was now called by many. It was true that the latter never sought to interfere with the rich claims which the American miner wrought, while he submitted very patiently to be violently driven away from whatever neglected spot he might have occupied, but which the white man suddenly chose to fancy. It was true also that the Chinaman regularly paid, as a foreigner, and was almost the only foreigner that did so, his mining license to the State; and was a peaceable and hard-working subject. These things did not matter. Right or wrong, he should be driven from competition with free white men, or his labor should be confined to certain inferior kinds of work, to which the dominant lords of the soil never meant to apply themselves. Angry words, much strife and perhaps some bloodshed were generated in the mining regions, and the hapless Chinese were driven backwards and forwards, and their lives made miserable.

Governor Bigler, influenced by the American miners' feelings, issued a message in which he stigmatized the Chinese as "coolies," (an appellation which they professed to abhor), and advised the Legislature to pass a law prohibiting the farther immigration of that people. The terms of this message were considered offensive and uncalled for by most of the intelligent and liberal-minded Americans. The Chinese in San Francisco, who now formed a large class of the community, took the matter much to heart, and, on the 29th April of this year, published a long letter or manifesto in answer to the governor's message. This letter was written temperately, and was an exceedingly able document. Subsequent communications of a like nature passed between the governor and the Chinese. The Legislature meanwhile had appointed a committee to consider and report upon the whole subject, and sundry passionate, and some other amusing speeches were occasionally delivered in the State chambers. In the end, the illiberal action suggested by the governor was not adopted, and soon the matter fell asleep. Farther immigration of this people took place in the course of 1852, and towards the close of that year there were probably sixteen or twenty thousand of them in the country. Considerable numbers have since left, but as many others have come in their stead, it may be supposed that in 1854 there is still nearly the number mentioned.

In San Francisco, the Chinese were in 1852, as they have always since continued to be, very numerous--perhaps numbering from three to four thousand. The following description of their present condition is also applicable to the year named. Though individuals of the race reside and carry on business in every quarter of the city, the chief district in which they are located is the upper part of Sacramento street, the whole length of Dupont street, and portions of various other streets adjoining these named. In such places the Chinese are almost the only inhabitants, and the quarter is often called "Little China." There is a considerable number of respectable and wealthy Chinese merchants and shopkeepers in San Francisco, who have extensive business premises in Sacramento street and in various other parts of the city. Their merchandise, as might be expected, is chiefly the goods of their own country. These are of the upper tenth order, the Corinthian capital of the "celestial pillar", and would be a credit to any community. They are polite, shrewd, and learned gentlemen; and are sometimes generous. They can either talk the English language pretty fluently themselves, or by means of an interpreter, can conduct any business transaction or private conversation. But the great mass of their countrymen is of a very inferior description. Most of this class, who do really work, engage in the washing and dressing of clothes, for which they receive such wages as must appear to them noble remuneration. The washing and drying are conducted at the different lagoons and wells in the vicinity of the city, while in the smallest, meanest habitation in every street, the Chinaman may be seen diligently ironing and finishing the cleansed garment with his smooth-bottomed chafing-dish of burning coals. They are also employed as porters in warehouses and stores, and in various other kinds of inferior labor.