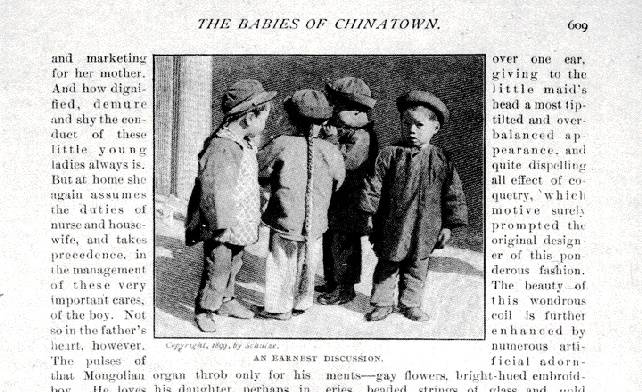 One California Camera Club member was the first known woman of color photographer in San Francisco, Mrs. Tape, who was also considered an expert in lantern slide photography. The reason for her migration at age 11 from a town near Shanghai, China is not known, although many Chinese girls at that time were imported to be sold as sex slaves or prostitutes. Several months after her arrival in SF's Chinatown (around the late 1860s) , the Ladies Relief Society took her in, where she learned English and the American mannerisms that were destined to astound a reporter who visited her family from the Morning Call:

"I had only come to see some photographs and talk with the lady that took them , and here I was sitting in a room with a family of full-blooded Chinese listening to a Chinese girl playing an old-time favorite on an American piano and talking to me with as much esprit as any girl of my own race. This fact struck me at first as exceedingly ludicrous, as I had always been accustomed to view the Chinese in an entirely different light: but when I saw around me the father and mother and their accomplished children I changed my opinion in regard to the race in general and saw that with proper instruction before they had become imbued with national traits they were as susceptible of civilization as any nation in the world.

"I expressed my usual surprise that she had been able to conquer the difficult art of photography, and she only laughed, saying, 'Oh, these are nothing to some of the work I have done. My friends usually beg everything good and leave me the rest. But here, look at these,' and she produced a pile of lantern slides, 'these are some that I take pride in.'

Although by then many amateur photographers sent their plates in to be developed, Mrs. Tape still insisted on preparing her own plates and printing the photographs. She learned photography by, "reading different authorities on the subjects and then studying the methods to see which was the best." Apparently she found quite a good method. Her landscapes, still lifes and portraits were exhibited at several shows and she received the highest awards in amateur photography from the Mechanics Institute. The February, 1892 issue of the Pacific Coast Photographer also made note of her achievements: "Mrs. Tape, the bright and intelligent Americanized Chinese lady, is becoming a slide expert. She probably does what but few amateurs have undertaken -- the manufacture of her own slide plates."

At age 16 she had met and married her husband Joseph Tape, an Americanized Chinese man who worked as an interpreter for the Imperial Consulate of China. His express business also had a monopoly over transporting the Chinese workers who came here in bond. The Morning Call reporter noted they were fairly well off and quite determined to assimilate as Americans.