The 1924 Chinese Hospital building with its more modern annex to its right, and the pyramid in the distance.

Early in San Francisco’s history, the city government used racist rhetoric to blame the Chinese residents for the poor and unsanitary conditions in Chinatown. The Board of Health asserted that Chinatown “constitutes a continued source of danger of this [virulent] character, and probably always will, so long as it is inhabited by people of the Mongolian race.” (1) Government officials also used the Chinese population as scapegoats for epidemic outbreaks by claiming their sources originated from Chinese living conditions. (2)

In the face of these accusations, many Chinese Americans established their own medical institutions. One 1878 article in the San Francisco Chronicle focused on a dispensary run by the Hop Wo Company, one of the Chinese Six Companies: “Chinatown with its smells, filth, crime, and mystery is slowly but surely reaching out, grasping and taking possession of all houses bordering on the present precincts [where] almost daily complaints [are sent] to the office of the Chronicle by persons who see and dread the advance of the heathen.” The writer of the article describes the dispensary as nothing more than a place where the Chinese American population sends their sick to die and tries to give the image of such facilities themselves as a sort of rampant disease. “Each company has a hospital of this kind, and they are not all confined within the limits of Chinatown, but scattered throughout the city.” (3)

Despite such condemnation for the health of Chinatown, the city made it nearly impossible for the people living there to improve their conditions. In 1888, the city denied an attempt by the Chinese Six Companies to construct a modern hospital under the belief that the Chinese would not be able to properly institute healthcare and only cause further nuisance to the city. (4)

After the Earthquake, the Chinatown community members and affluent organizations took great efforts to rebuild. One of these plans was the Chinese Hospital on 835 Jackson Street. (5) The Chinese Consolidated Benevolent Association, otherwise known as the Chinese Six Companies, was a primary source of funding contributing heavily to the hospital, but it was also a community driven project across all parts of Chinatown. (6). The other organizations credited with contributing to the hospital’s funding were the Chinese Chamber of Commerce, Saint Mary’s Catholic Mission, and the Chinese Christian Union, with references to many other organizations that all had a hand in assuring the future of healthcare in Chinatown. (7) Groups like the Chinese Chamber of Commerce were noted to have “sought to cultivate ‘modern ways of life and health’ among the Chinese.” (8) The Chinese Hospital Association filed an application for a permit with the Board of Supervisors that was heard on August 8th 1923. (9) The result of the hearing was a unanimous recommendation from the Health Committee of the Board of Supervisors to grant the permit with a large audience of Chinese in attendance at the meeting. (10) The organizations of Chinatown were moving to modernize the town’s medical facilities, but this time the city’s officials were willing to trust in their Chinese population. 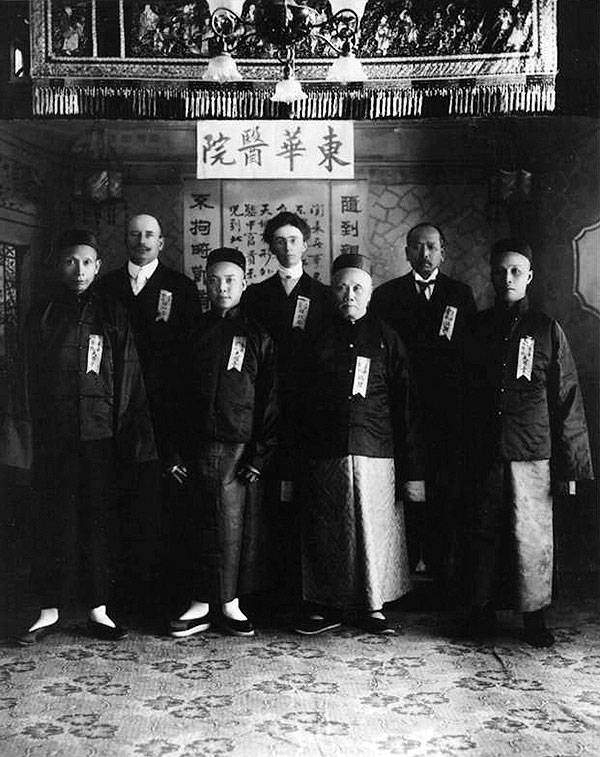 Public funding also helped demonstrate the changing relations between the city and Chinatown. A massive carnival in Chinatown celebrating the grand opening of the Chinese Hospital that started on April 18th in 1925, would go on for nine days. The carnival generated immense interest from outside of Chinatown. Despite taking patients earlier, the hospital delayed its formal opening to coincide with the carnival. A newspaper article declared that Chinese Americans from all over California would come to celebrate the hospital as a monumental leap forward with the most prominent Chinese Americans invited. (11) The carnival was largely praised by the San Francisco Chronicle as a festival where “the Occident and Orient are combining their revelry in an unusual manner,” which led “automobiles by the score” to visit Chinatown for the carnival. (12) The carnival, in addition to providing funding, also demonstrated Chinatown’s ability to embrace American customs and gain approval from the rest of the city as something more than hygienic nuisance. The two events that generated the most interest in the newspapers were the beauty pageant for the Queen of the Chinatown festival and a baby popularity contest.(13) The pageant’s emphasis in particular was an interesting selection for how it played to contemporary American sensibilities coming so soon after the Miss America Pageant began in 1921. Another aspect of Americanization by which the hospital was advertised to the rest of the city was in 1924 when the Chinese of Oakland and Berkeley dedicated their annual football game to the benefit of the Chinese Hospital. (14)

The Chinese Hospital represented a continuous and expansive change in public opinion about the nature and prospects of the Chinese American population. The hospital was an undeniable accomplishment that challenged the traditional racist views against the Chinese American population living in America. Of the many people attending the formal opening of the hospital, Mayor James Rolph and Lieutenant-Governor C. C. Young publicly spoke great praises of the hospital as a symbol of Chinatown and of progress. Mayor Rolph said, “It is good to know that everyone who is ill in this district will find succor at this place, this hospital is another testimonial to the good citizenship of our Chinese residents.” Lieutenant-Governor Young also declared “This splendid building is concrete proof of the enterprise and vision of the Chinese residents of California.” (15) The changing views could almost come off as denying the years of ill treatment. One newspaper praising the creation of the hospital wrote “…nobody has ever accused [the] Chinese in San Francisco of not adopting, very readily and very promptly, outside of their own homes, the customs of the new land to which they have come.” (16) The rest of the newspaper entry enthusiastically describes how the hospital’s technology is well thought out and arranged for a fully-functional modern hospital. 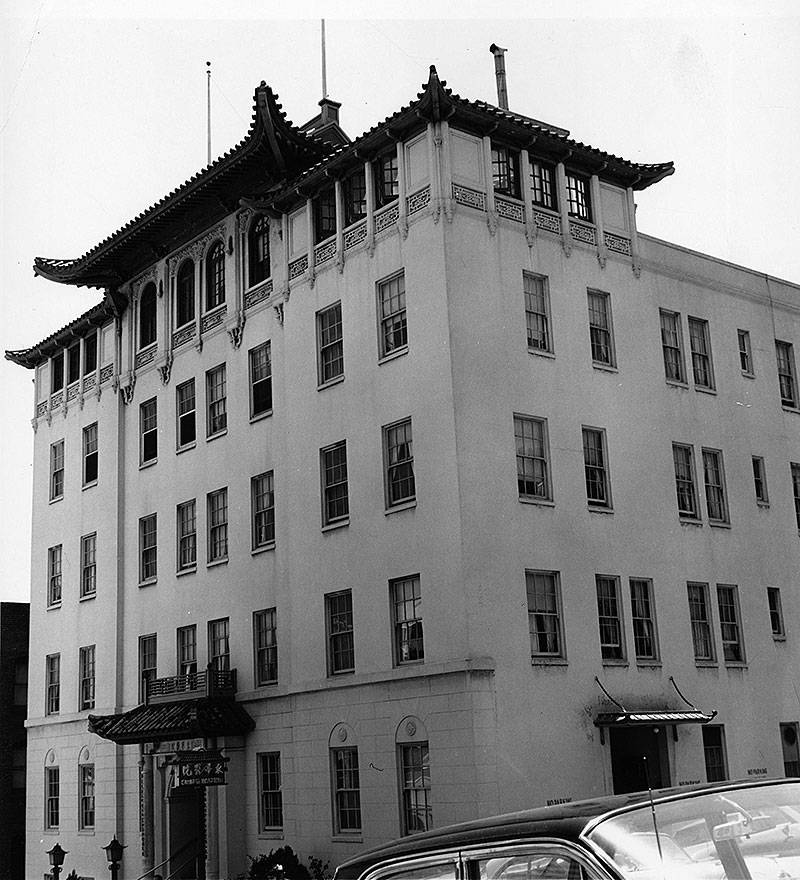 The Chinese Hospital built in 1924. 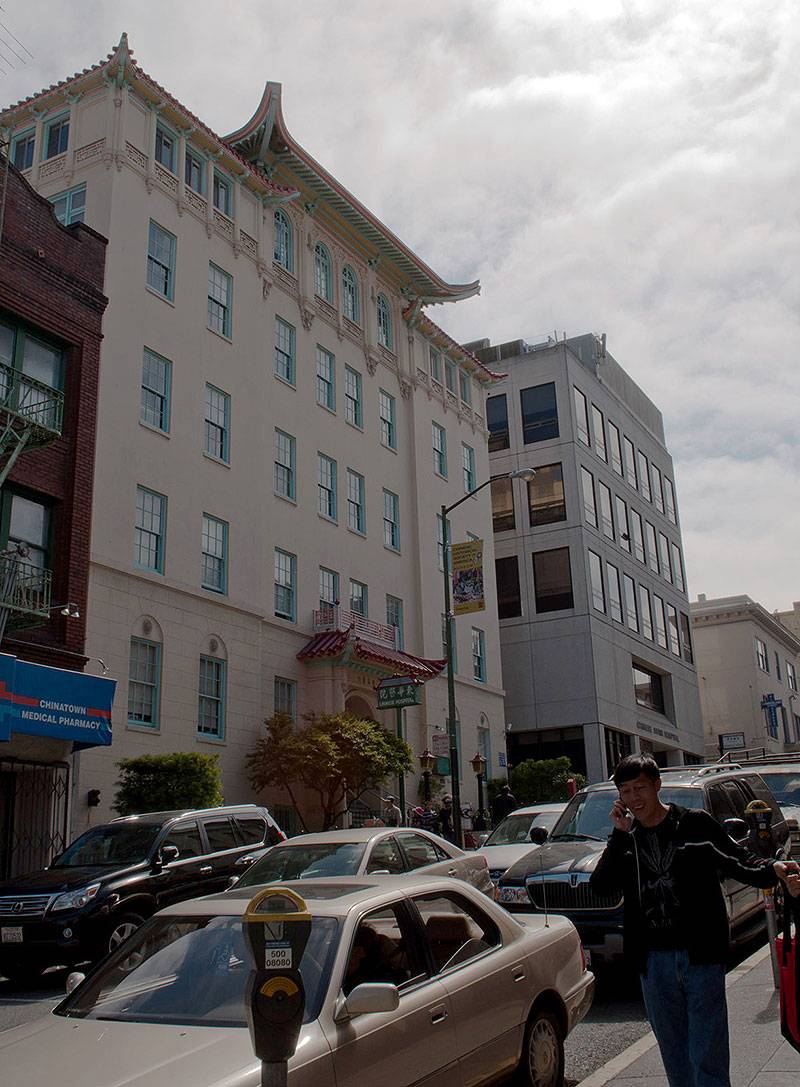 However, this growing acceptance came with nuance. Despite progress from the days when individual companies would be forced to provide healthcare disjointedly across the city and the government itself would sponsor outright racist condemnations, the city couldn’t be considered to have fully accepted the Chinese American population. The federal Chinese Exclusion Act would be repealed two decades into the future—on December 17, 1943—and the Immigration Act of 1924 made it so that “the immigration of Chinese women immediately ceased.” Historian Nayan Shah explains that the hospital was one project of many led by the Chinese merchant elite to influence Chinese Americans to adopt American middle-class values and culture. (17) The common rhetoric suggested that the hospital’s achievement was connected to Asian Americans assimilating with the rest of the city. The same newspaper article praising the Chinese in San Francisco connected their success to adopting an American nature. “China has never been accused of having any overwhelming desire to be modern,” was an attempt to contrast the generations of Chinese in San Francisco. “The younger generation of the Chinese apparently have accepted wholly everything American, without, however, losing their respect for of the Chinese methods of thought … but nothing has so well illustrated the degree that the Chinese of this city have become permanently part of our civilization than the fact that they threw open the doors, on April 18 [1925] of one of the finest hospitals in San Francisco.” (18) Such ideas were also expressed by hospital authorities themselves. M.S Jung, the assistant superintendent, while praising the hospital said, “The opening of the Chinese hospital will mean the furthest step in the modern advance of our countrymen.” He contextualized the hospital to some extent as a rejection of the Chinese old ways. “Our ancestors had their superstitions of illness and death. These will be forever wiped out.” (19)

The actual hospital itself was an impressive facility. With a cost of $250,000, the building was five-stories tall, held fifty-five beds, and had two operating rooms furnished with high tech surgical equipment. The hospital also had a clinic that would be dedicated to providing free service for needy patients. The maternity ward took up half of the fourth floor, and M. S. Jung predicted most of the babies in Chinatown would be born there. Of the 40 physicians, five were Chinese, and the Chinese Hospital was supervised by Dr. Howard H. Johnson, superintendent of St. Luke’s Hospital. (20) The hospital also employed Chinese herbalists not totally forsaking Chinese traditions in favor of complete assimilation. (21) 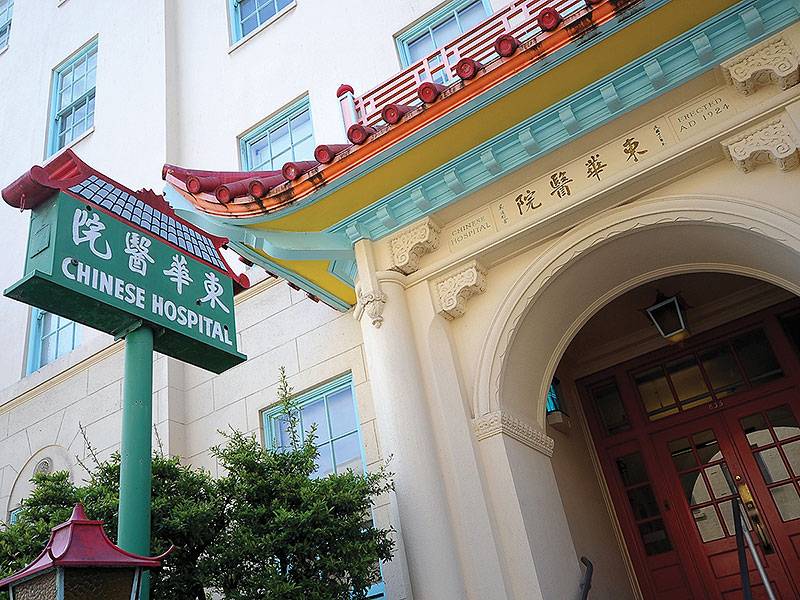 The original decor for the entryway matched the kitschy tourist-appealing style employed during the post-quake rebuild of Chinatown.

Today, the hospital is doing well and has developed new wings and locations to handle the city’s increased demand. However, such historic racist rhetoric can still show up in modern American culture. After the spread of COVID-19 exposed continuing racism against the health of the Chinese, the hospital has continued its legacy of serving the community. In the time where anti-Chinese hate crimes rose amongst the COVID-19 pandemic, the hospital remained as a critical institution to challenge those harmful stereotypes. The hospital also worked with the San Francisco government to provide free testing for San Francisco residents and successfully administered 25,000 vaccine doses as of April 23, 2021. No matter how much time has passed, the Chinese Hospital reports it continues to remain proud of its long history in service to the Chinese community. (22) 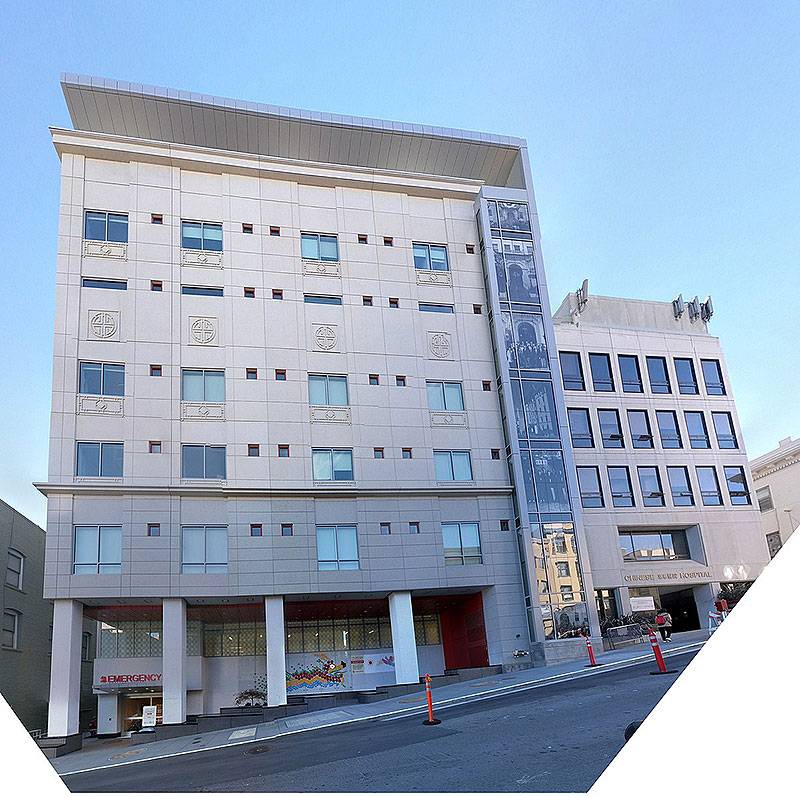 1. Calisphere. “Report of the Special Committee of the Board of Supervisors of San Francisco” UC Berkely, Bancroft Library. Accessed June 1, 2020.