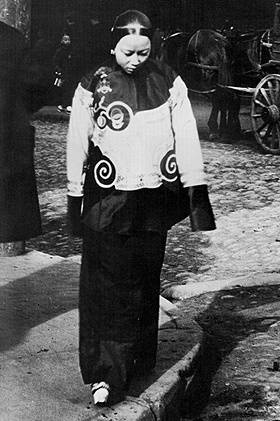 In the 19th and early 20th centuries, Jackson & Washington Streets were lined with cribs, makeshift twelve-by-fifteen-foot stalls where the favors of Chinese slave girls could be purchased. The cribs were generally divided into two rooms by a curtain; through the inset barred window in the narrow door, the girls enticed men by displaying their upper bodies and crying: China girl nice! You come inside, please? Two bittee lookee, flo bittee feelee, six bittee doee! Your father, he just go out! (In certain Chinese cultures it was considered an honor to fornicate with a woman immediately after one's father had done so.)

Men who wanted to actually buy a Chinese slave girl had to attend auctions held periodically at secret locations. There the girls were stripped, inspected, and examined like cattle.

Library of Congress - Publisher or Photographer