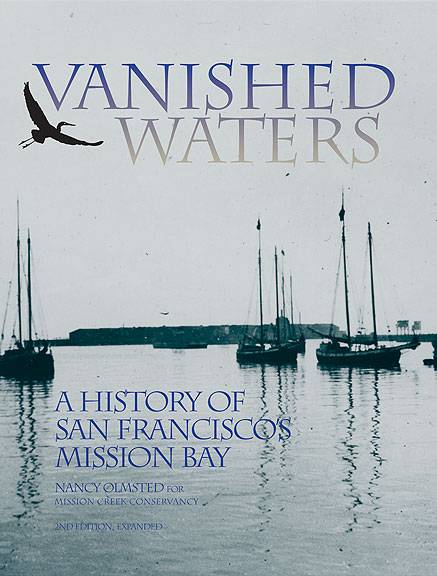 This category features the contents of the book "Vanished Waters: A History of San Francisco's Mission Bay" by Nancy J. Olmsted for the Mission Creek Conservancy.

The history of Mission Bay is the story of the gradual filling-in of a vast tidal cove in San Francisco Bay. Covered with shallow waters of Mission Bay, edged with tidal salt-marshes and receiving fresh water from meandering Mission Creek, this broad, sunny expanse of real-estate has over the last 130 years at­tracted a wide variety of would-be settlers, imaginative speculators, and visionary planners.

First the salt marshes, mudflats and estuaries were bridged over, then filled in with the city’s unwanted sandhills. Finally, as it was planked and paved, the fill extended farther and farther—eventually reaching out into greater San Fran­cisco Bay to engulf Mission Rock. This slow process adapted to changing tech­nologies: planked toll-roads for the horse-and-buggy; Long Bridge, a causeway with rails, for the horse-car; a ferry landing for railroad freight cars from Oakland; a broad network of tracks, a roundhouse and freight warehouses for the railroad; and now, high arcs of concrete freeways designed to carry automobiles and trucks above the ground.

To understand how these physical changes happened, it is necessary to un­tangle a cat’s cradle of promises, court decisions, legislative actions, planners’ visions and speculators’ schemes—some so frankly fraudulent that newspaper articles, now yellow with age, sputtered in outraged protest. All of this was part and parcel of the charged-up history of San Francisco. The land that was Califor­nia, after centuries of natural evolution, was literally turned upside down and inside out in the hunt for gold, all within a decade. Speculation was so feverish in this over-heated population that it spread from gambling tables to real estate, and deeds for the city’s water lots were swapped and sold as if they were cards played on green felt cloth.

The story of Mission Bay moves back and forth from the changing physical reality of the land—best understood from maps and photographs—to the less easily comprehended doings of such a self-acknowledged rogue as Asbury Har­pending, of the self-appointed “Judge” John McHenry and the eccentric William Cornell Jewett, and of the “infamous” Dr. Peter Smith, who went to court to collect what was due him from the city. In so doing, he set off such a scandal of land speculation that the city fathers stood accused of “giving away the city’s patrimony.”

The history of Mission Bay, long concealed, is even now only half revealed. Information from deed books of the 1850s yields new evidence of the impressive scope of Gold Rush wheeling and dealing. It also introduces new dramatis per­sonae who must become subjects of another book. An old letter from Jasper O’Farrell, the city surveyor, takes on new significance, but opens questions re­quiring research beyond the scope of this modest work. Each person interviewed knew of someone else “not to be missed.” But time and pages come to an end, so the hidden history of Mission Bay raises some tantalizing speculations for both reader and author, and that is the fascination of history.

The following 23 pages are in this category, out of 23 total.