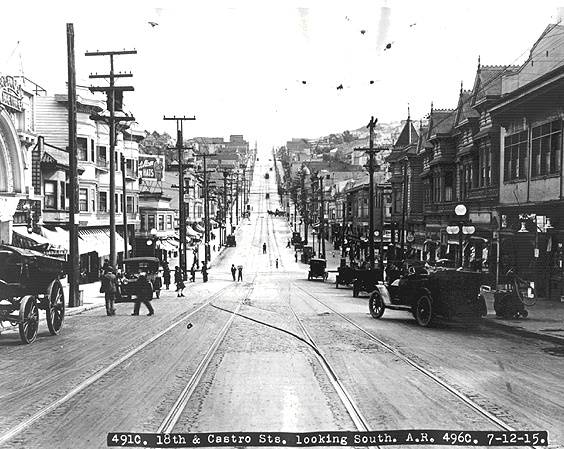 Eureka Valley began as a quiet Victorian neighborhood made up of working class Germans, Scandinavians, and Irish. The original residents, the Ohlone Indians, roamed the grassy valleys until the Spaniards founded Mission Dolores close by. The Spaniards rounded up the Indians, brought them into the mission and sent Candelario Valencia, Francisco Guerrero, and Victor Castro to tend sheep and cattle in the Eureka and Noe valleys.

The area did not experience any significant population changes until after World War II, when the Scandinavians, Irish, Germans, and Italians began to leave Eureka Valley for the suburbs. As a result, the economy of the area began to suffer and many businesses closed. The art deco Castro Theater was almost forced to shut its doors.

In the early 1970s, the rapidly growing gay/lesbian population in the San Francisco area revitalized the neighborhood when they renovated old houses and rebuilt the commercial industry.

The main commercial street within the neighborhood formerly referred to as Eureka Valley is Castro Street, which has led to the area more commonly being referred to as "The Castro." Harvey Milk Plaza, at the corner of Market and Castro, is named for San Francisco's first openly gay supervisor. Eureka Valley is made up of a widely varied population, but it is the character or Castro Street that has made it famous.

The following 72 pages are in this category, out of 72 total.