Call Her by Her Name: A Work Story 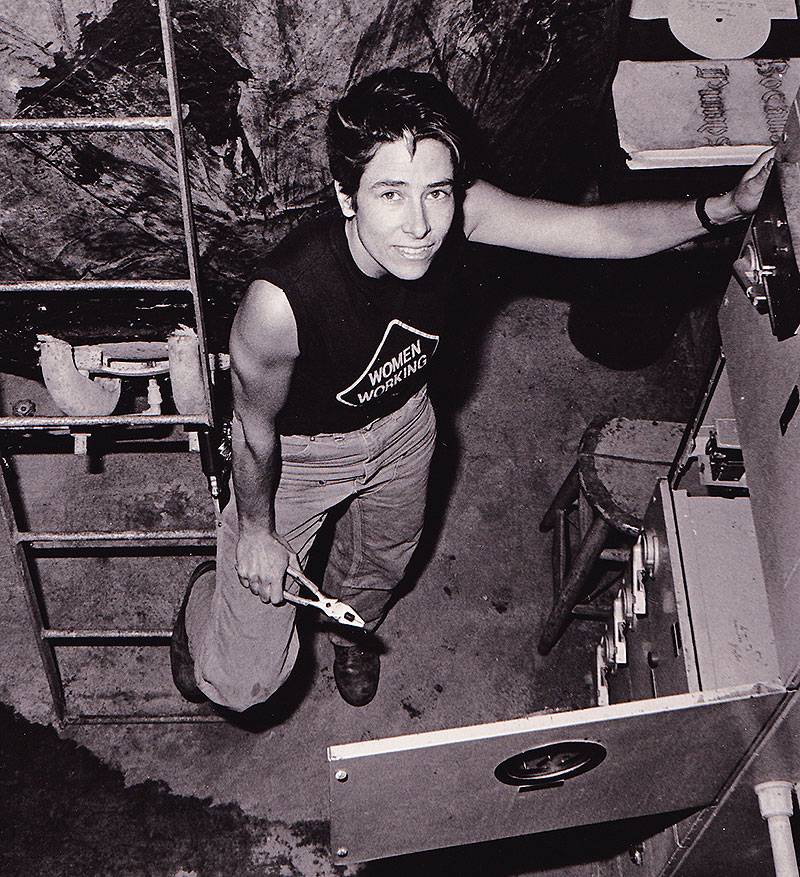 Al and I first met when I walked into the open door at Summit pump station. He was kneeling on the concrete floor painting one of the pump motors that supply water to the city of San Francisco. When he saw my figure standing in the doorway he jumped back, like I was there to assault him. That gave me a little jolt of power—that a man might be startled by me. Yeah, I thought to myself, I’m a big strong woman and men flinch at the sight of my form. But there was a safety issue. The pump stations are situated in remote parts of the city. And I wasn’t supposed to be there. Or, in reality, no one knew where I was at any particular moment. As the one electrician responsible for all the stations, I kept my own schedule, responding sometimes to complaints or work orders and sometimes just checking to make sure the electrical equipment was working.

“Hey,” he said, squinting at me in the sun glaring through the open door. “Who are you?”

“I’m the electrician. Who are you?” I answered. But I knew he was a stationary engineer. Painting motors is part of their job.

The corps of engineers worked out of the Lake Merced pump station where they reported to the chief engineer, Joe. I thought I’d met all of them at one or another pump station. But Al was a retiree just filling in for a coworker who was in rehab. I figured he was about three decades older than me, a small redhead still with a good bit of hair left. He reminded me of a leprechaun—little and cute. We liked each other immediately and over the course of a few months we became friends. Not the kind of friends who see each other outside of work. But we would share personal information that we might not share with others.

There was one other engineer I was tight with, Jesus, and he would sometimes meet up with me and Al at lunch break. Jesus was transitioning from male to female and had been taking hormones for a few months. He had saved up enough money for the operation and was in the process of scheduling it. Al told me Jesus had announced to their fellow engineers that he now wanted to be called Rosa.

“How did they react?” I asked, thinking that must have taken some courage.

“They looked at their hands and didn’t say anything,” he said. “Just some snickering.” Knowing that he was planning to transition, his coworkers had ignored Jesus and refused to talk to him. Now that he was Rosa, the treatment would be no different.

Jesus told me he had known he was really female from the time he was a child in Mexico. A generally happy person with a positive attitude, Rosa was positively delighted to finally be female, to be herself. I thought she radiated serenity.

I wish I could say the transition was seamless for me, that I found it easy to switch from Jesus to Rosa, but I found it difficult. I had gotten to know this person as Jesus and now it was like I was having to start all over again. The pronoun thing confounded me. Back in the day we feminists had pushed to rid the English language of male and female pronouns, but the idea never took hold. I dearly wished for those genderless pronouns whenever I screwed up, but Rosa was forgiving.

I was suspicious of most of the men at work. Let’s just say they didn’t welcome me, the lone female, into the fold. I tried to give them as little information about myself as possible, assuming it would be used against me. I knew that I could not be friends with these men. But I had begun to feel differently about Al and Jesus.

I learned that Al was married to a French woman, that they had no children. I learned that he had been around the world as a seaman. Like many of the engineers, Al had learned his trade in the Merchant Marines. I knew some things about the Merchant Marines—that the celebrated San Francisco Communist Bill Bailey had been one and that he was not the only commie. I knew that the mariners had performed a vital service in World War II, risking their lives to supply materiel to the fronts. I knew that, while they weren’t part of the military, the merchant navy had suffered a higher casualty rate than any branch of the military. Their boats were always being torpedoed. Then, after the war, they were attacked and denied any benefits because they were all branded as communists, which of course most of them were not. They were just civilian patriots willing to risk their lives to protect the lives of others.

I knew enough to gain some trust with Al before asking but I had to ask, “Were you a Communist?”

All I got was a wry smile, enough to let me know I should stop asking questions.

But that was enough for me. I call myself a communist with a small c, more of a new leftist. I’m always delighted to meet up with the old commies, for whom I have great regard. They don’t always want to admit past affiliations. Most of the Reds were disheartened by knowledge of Stalin’s murderous legacy. Many were hounded for years by Hoover’s FBI. Jobs were lost and lives ruined.

Now it was 1985, the depths of Reaganism, which made all of us minorities jumpy and skittish and gave our detractors permission to be openly hostile. The AIDS epidemic was ravaging San Francisco’s gay men’s community while Reagan refused to even acknowledge the disease. Women—feminists—had come under attack along with anyone who didn’t fit into the back-to-the-fifties scenario. Immigrants, transgender people and communists too. Maybe that’s why the three of us gathered, just to know we weren’t alone.

Jesus, now Rosa, had begun presenting as female, letting her hair grow and wearing women’s clothes. But she didn’t really look that different than before. We all wore work clothes. My work outfit consisted of boots, canvas work pants, a T-shirt with a flannel shirt over the top, and when it was cold a wool-lined vest or jean jacket. A hard hat was not required on this maintenance job and I didn’t have to wear a tool belt. I carried my hand tools in a leather tool bag. And I drove a truck painted Water Department colors, Kelly green and white, in which I carried wire, pipe, benders and all the other tools and material I might need. Rosa, when dressed in work clothes, looked like me.

Rosa was the first transgender person I got close to, but I was not completely naïve. Ire had been raised in the tradeswomen community when we learned of a transgender female carpenter in our midst. She had transitioned after working as an already skilled male carpenter. She was getting work while we were frozen out because we were women. The contractor got to count her as an affirmative action hire. It didn’t seem fair. Then there was a continuing dustup in the lesbian community about a transgender sound engineer who worked for Olivia Records, the women’s music company. She had been trained while still male. We women wanted to do everything ourselves, but we didn’t have the skills because we couldn’t access the training. It’s possible that when the engineer, Sandy Stone, was hired, there were no other female sound engineers. Some lesbians were quick to attack the individual, but most of us understood that our real enemy was the system that discriminated against women.

At lunch one day Al told us some war stories. He said he had survived a torpedo attack where some seamen had died. I tried to imagine his life on those ships. I’d heard the gay historian Allan Berube’s lecture and slide show about sailors and soldiers during the war. They were all having sex with each other, especially the sailors. I knew Al wasn’t gay but I suspected he’d participated in gay sex.

I had allowed myself to relax a little with Al and Jesus. I came out to them. We talked politics. We all hated Reagan. I had started to feel comfortable with these guys.

Then one day while Al and I worked together he confessed that his wife no longer wanted to have sex with him and he was super horny. Did I want to have sex with him? It wasn’t as if men at work had not come on to me before. This was the typical way they did it; they would complain about their wives and that would be the opening. But I was shocked to hear this from my friend Al. I’d been solidly in the friend category I thought. Suddenly I was in the gal toy category. Or was it the whore category? Weird.

I said, “Al you know I’m gay. I’m not attracted to men.” Which wasn’t entirely true. I’d lived much of my life as a practicing heterosexual.

Then I was grossed out thinking my friend Al wanted me to pimp out my women friends. Then I was disappointed that our friendship was not what I had thought it was.

“So you only have sex with women?” Al asked.

“Well yeah. That’s what being a lesbian means. Maybe I’m not as sexually fluid as you. I know what y’all did on those ships.”

No response except that wry smile again.

That interaction changed my relationship with Al, but he may not have even noticed. Like many men he lacked a certain amount of sensitivity. On the other hand, his size and his politics—his minority status in the world of men—engendered more empathy than most.

So now I started thinking Al was like all the other guys. I stopped feeling so safe around him. Not that he might attack me. No, I was pretty sure I could take him in a fight. I was bigger and I practiced karate. It was more that he didn’t value me, didn’t see who I really was, and so might not understand the need for discretion. I did know that just because someone is or was a Communist does not mean they are not sexist as hell.

For a while I didn’t cross paths with Rosa. I still saw Al out in the field and he would fill me in on Rosa’s transition. The surgery had gone well and Rosa was back at work. She was happy, even as her coworkers continued to give her the cold shoulder.

“I’m having trouble re-learning Jesus’s name,” I confessed. “I’m just not good at it. I get all confused with the pronouns and I keep saying him instead of her.”

This time Al’s response was sharp and I realized he must be doing his best to protect Rosa from harassment by the other engineers.

It was an admonishment and I took it seriously. Al was worldly wise and maybe had known other transgender people. He knew how to be an ally. Could I really be learning something from this old white guy?

I guess everybody’s got something to teach.

This is the third of a three-part trilogy. Part two is here, and part one is here.