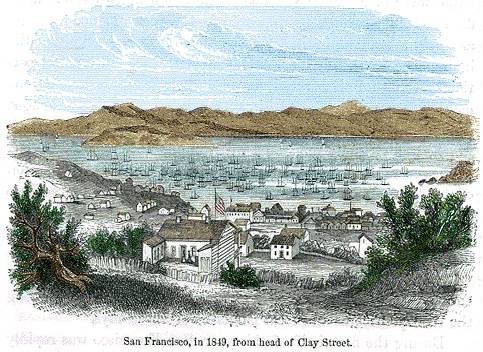 1849 view of San Francisco from the top of Clay Street.

During the first half of this year, San Francisco was rapidly increasing the number of its houses and population. Every day added sensibly to both. The mines were continuing to yield large returns, most of which were immediately forwarded to San Francisco, in exchange for new supplies. The bay was filling with shipping from all the ports of the Pacific coast of both Americas, from the Sandwich Islands, and from China, Australia and other ports towards the west. Nearly two hundred square-rigged vessels lay at anchor about the end of July. Hosts of passengers by these vessels, after staying but a little while in the town, hurried off to the diggings. Meanwhile, others who had been fortunate were returning from the mines with bags of gold dust, to squander in gambling, in drinking and all manner of thoughtless extravagance and dissipation. Gambling, which previously had been carried on to so great an extent, was now beginning to be developed on a still larger scale. Saloons, at the public tables of which every variety of game was to be found, arose in all quarters of the town, where play was carried on during the whole twenty-four hours, and where the gross amount of money or gold dust staked was enormous. It might almost be said that the same spirit of gambling or speculation reigned in every department of business; and prices rose and fell, and fortunes were made, and lost and made again, according to the play of the parties engaged. New towns, all of course in splendid locations, were beginning to be projected, and the building lots in them sold for immense sums of money. Sacramento and Stockton were among the first and best needed of these places; and soon they took such positions as commanded success and insured future prosperity. But besides these two cities, a multitude of other and inferior places were projected, and while the future of the whole country was uncertain, but over which hung a certain vague grandeur, their pretensions were very respectably set forth, and speculation in their allotments was rife. Some of these schemes have since shared in the general advancement of the country; while of others probably nothing again will ever be heard.

A short experience of the mines had satisfied most of the citizens of San Francisco that, in vulgar parlance, all was not gold that glittered, and that hard work was not easy; sorry truisms for weak or lazy men. They returned very soon to their old quarters, and found that much greater profits, with far less labor, were to be found in supplying the necessities of the miners, and speculating in real estate. For a time everybody made money, in spite of himself. The continued advance in the price of goods, and especially in the value of real estate, gave riches at once to the fortunate owner of a stock of the former or of a single advantageously situated lot of the latter. When trade was brisk, and profits so large, nobody grudged to pay any price, or any rent, for a proper place of business. Coin was scarce, but bags of gold dust furnished a circulating medium, which answered all purposes. The gamblers at the public saloons staked such bags, or were supplied with money upon them by the "banks", till the whole was exhausted. There were few regular houses erected, for neither building materials nor sufficient labor were to be had; but canvas tents, or houses of frame, served the immediate needs of the place. Great quantities of goods continued to pour in from the nearer ports, till there were no longer stores to receive and cover them.

In addition to Broadway Wharf, Central Wharf was projected, subscribed for, and commenced. Several other small wharves at landing-places were constructed at the cost of private parties. All these, indeed, extended but a little way across the mud flat in the bay, and were of no use at low tide; yet they gave considerable facilities for landing passengers and goods in open boats. The different religious denominations were beginning to make movements as to creating churches and appointing clergymen; while the Freemasons and Odd-Fellows were likewise beginning to take their characteristic first steps. Seamen deserted their vessels as a matter of course, so soon as they dropped anchor in the bay, and hastened to the mines. Society, not merely there, but in San Francisco, was in a state of utter disorganization, which became worse and more terrible as the autumn and winter months brought new thousands of immigrants upon the place. We have seen that there was neither a proper government for the State, nor recognized municipal authorities, who could have protected the citizens and established order, and made provision for the systematic extension of the town and reception of the coming crowds. There was a military governor, indeed, and martial law could have been adopted, but the governor had not sufficient force at his command to curb the wild elements of the population; nor, at best, would his forcible interference have satisfied American ideas of civil independence and the national privilege of self-government. Thefts, robberies, murders, and other outrages of the most desperate and criminal nature were taking place, and there were no proper officials to take cognizance of them and bring the offenders to justice. Every man was intent on merely making money, and provided an outrage did not, in a direct manner, personally or pecuniarily affect himself, he was content to shut his eyes to the ultimate consequences.

By the beginning of 1849, the population of San Francisco had increased to two thousand. Two months later it was probably about three thousand ; whilst in July, when the riots and outrages of the "hounds" came to a height, it might be nearly five thousand. This was what might be called the "usual and permanent population of the time"--if any thing could be supposed permanent in so frail and fluctuating a place, although every day new arrivals of immigrants added temporarily to the number, till they flocked off to Sacramento, Stockton, and the mines.