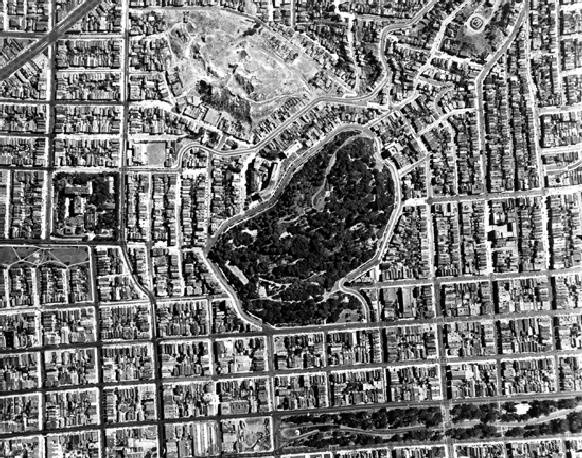 Photo from directly above Buena Vista Park in 1948. The Panhandle is still a roadway, and Corona Heights is still a scarred quarry.

Buena Vista Park was known as Hill Park in 1867, when San Francisco's Committee on Outside Lands reserved the 36-acre, 589 foot-high slope as the first plot in the city park system. They paid squatters $88,250 to relinquish claims to the hilltop.

After dedication as Buena Vista Park in 1894, John McLaren supervised the forestation of its hills, adding eucalyptus, cypress, pine, Australian tea trees small redwood 6 to the few grove existing native live oaks and toyon trees. San Francisco school children planted seedlings on Arbor Day during Mayor Adolph Sutro's reign from 1894 through 1898. The summit became a view spot for visitors and residents and, in 1906, people gathered there for five days to watch the fires from the earthquake.

Today, as the city's third largest park, it's an even better view spot thanks to Buena Vista Park neighborhood groups that have lobbied City Hall for improvements over the last 90 years. Their efforts continue.

Around 1910, park neighbors organized an improvement club to press for renovation of the park and the roads around it. They succeeded in generating new staircases, paths and tennis courts, which were dedicated in 1913.

Twenty years later, the Works Progress Administration, working on erosion control and footpaths, constructed a retaining wall and drainage ditches using slabs of broken marble recycled from Lone Mountain cemeteries. In some places, inscriptions from the headstones can still be read.

In 1950, Supervisor Chester MacPhee's proposal to sell parts of the Park because it was "unused, unsightly and required a policeman there at all times" was mercifully tabled indefinitely by the Board of Supervisors.

The following year, the Haight Ashbury Merchant & Improvement Association and the Stanyan Neighborhood Youth Council combined forces and wrote Mayor Elmer Robinson requesting $4,000 for resurfacing the tennis courts and $90,000 for a baseball field. Their plea produced a check for $4,500.

The Haight Ashbury's "Summer of Love" invaded the park in 1967.

Transients built camps in the deep brush that shielded drug trafficking and casual public sex. In the climate of the time and without maintenance funds, the park continued a downward slide until 1978, when the Open Space Acquisition and Park Renovation Fund allocated $200,000 for Buena Vista Park renovation largely for creation of a path system to aid erosion control.

Turbulence and turnaround in the neighborhood marked the '80s. A CBS documentary painted Buena Vista Park as a gay sex park and the body of a civic leader's murdered widow was found in the park. But, undeterred by the sensational news, couples discovered the neighborhood, became new homeowners and started families.

They joined the Buena Vista Neighborhood Association in developing a proposal for a child-friendly, more-accessible park. Recreation and Park planning director Deborah Learner and her staff worked with residents for more than a year to evolve a $2 million master plan, approved in March 1987, with implementation over five to eight years.

Major improvements followed. The summit was changed from a parking lot to a grassy area and viewpoint; a playground was rebuilt, a tennis court resurfaced and re-fenced, and the irrigation system expanded.

Since 1996, monthly workdays--with regular and valuable help from Walden House--have added garden tasks to help Rec and Park with maintenance. Buena Vista neighbors have now set their sights on improved lighting and new landscape designs for the four major entrances as their next improvement project.

(The Buena Vista Cafe, at 2765 Hyde St., by the way, is considered the home of the Irish Coffee.)

From the San Francisco Observer, July 1999