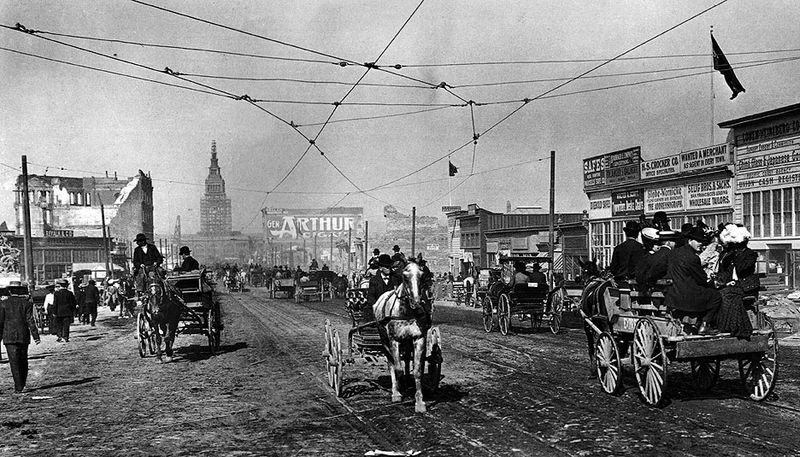 May 24, 1907, United Railroad strike, foot of Market fills with other vehicles. 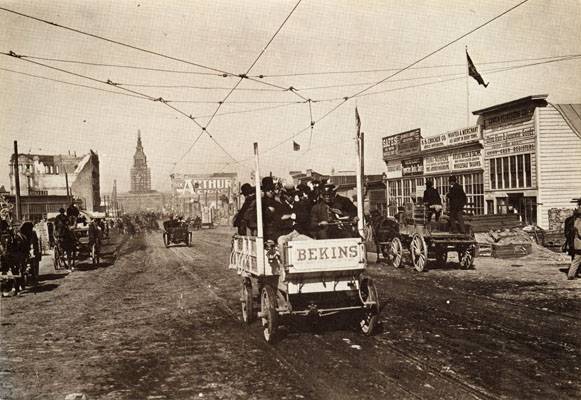 View of Market Street during the streetcar strike of 1907.

January: Electrical workers (in the International Brotherhood of Electrical Workers, IBEW Local 6) strike for a wage increase from $5 to $6 a day. The Building Trades Union tries to break strike; Building Trades leader P.H. McCarthy creates a competing electrical union to help defeat it.

April 1: Laundry workers strike for wage increases and an 8-hour day. By late April, most San Francisco laundries have acceded to demands, though laundries in other Bay Area communities continue to resist union demands.

May 1: Bay Area metal trades go out on strike for an 8-hour day. Early in 1907 the Iron Trades Council served notice to employers that the 8-hour day would begin on May 1, 1907. Employer group, the California Metal Trades Council, offers a 5% wage increase and the 8 hour day only when over 50% of east coast metal trades have it. 4,000 Bay Area metal workers strike on May 1st.

May 4: Over 1,500 streetcar men vote to strike for the 8-hour day. Patrick Calhoun (soon to be indicted for bribery in the growing Union Labor Party municipal scandal involving Mayor Schmitz, the Board of Supervisors and political boss Abe Ruef), decided to go to war. Five of the six years from 1902 to 1907 had seen strikes by the Carmen's union. Calhoun brought in experienced strikebreakers from the East Coast. 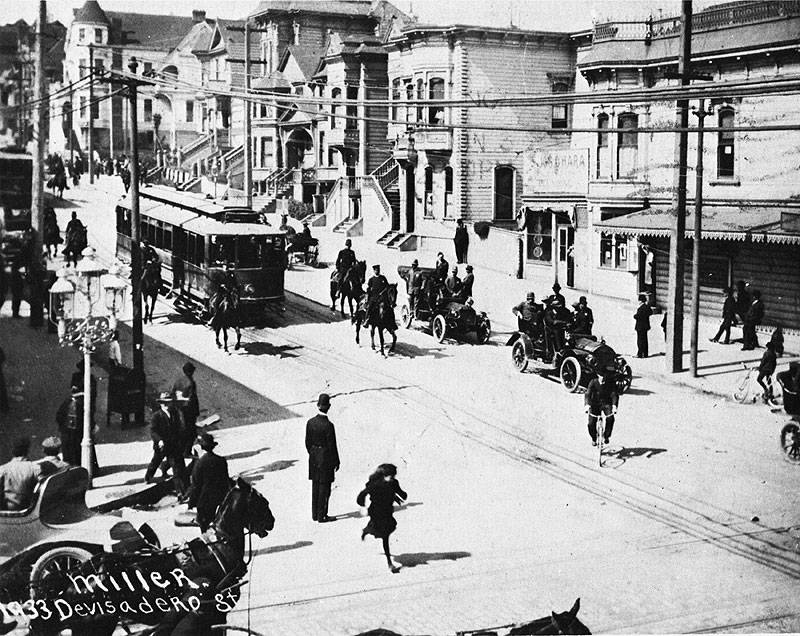 In this photo, San Francisco police escort a scab streetcar to protect it from the violence that erupted repeatedly during the 1907 streetcar strike.

With over 10,000 streetcar men, metal workers, laundry workers and telephone operators on strike, the Labor Council worries about a General Strike breaking out. In fact, a Labor Council delegate from the Waiters' Union, Selig Schulman calls openly for one. Militant socialist unionists are distributing handbills urging workers to “Tie Up The Town.”

Calhoun is a hero to the local elite for standing up to the union and the graft prosecution simultaneously. The National Association of Manufacturers wires him enthusiastic support and promises millions to destroy labor's power in San Francisco, amidst local calls for a new vigilance committee... but by June the ardently pro-business Argonaut was lamenting the “jellyfish of our capitalistic and mercantile community,” for its tepid engagement in the class war underway.

By the end of May, the Metal Trades agree to an 8-hour day to be phased in between December 1908 and June 1910. This forces one-third of the striking metal workers to relinquish the 8-hour day they had already achieved prior to the strike! A similar compromise is reached in the laundry strike — a 51-hour week immediately, with a 48-hour week by June 1, 1910.

The streetcar strike drags on, Calhoun remains intransigent. Boycotts, sabotage and small riots characterize the summer and early autumn, but the United Railroads gradually hires a full complement of permanent replacements. On Labor Day a streetcar was attacked, and a building worker shot to death in the skirmish.

The strike was officially called off (and lost) in March 1908. Six men lost their lives and over 250 were seriously injured. Accidents during the strike increased dramatically and killed another 25 and injured over 900. The labor movement lost over $300,000 in strike funds, and the Carmen's Union turned in its charter in late 1908 conceding their termination. (detailed account of carmen's strike) 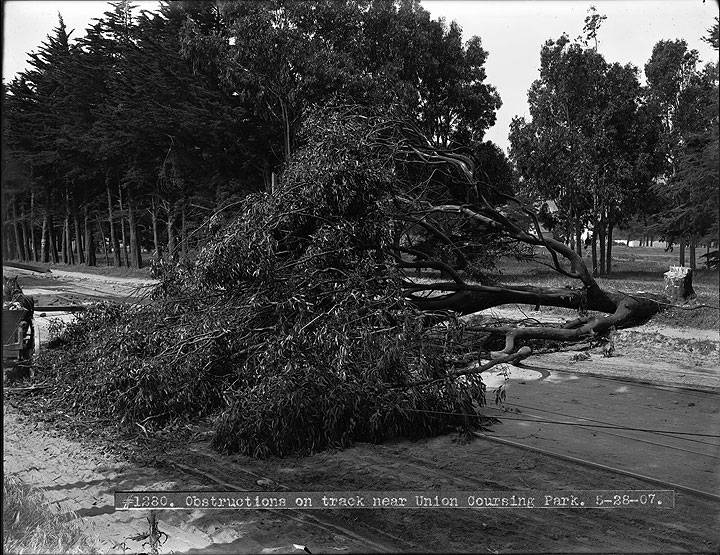 Obstructions were placed on streetcar tracks across western San Francisco during the strike, here on Mission Street in Daly City, May 28, 1907. The photographer for United Railroads, John Henry Metz, was obviously sent around on May 28 to document the sabotage committed by strike supporters, as this sequence of photos are all taken the same day. 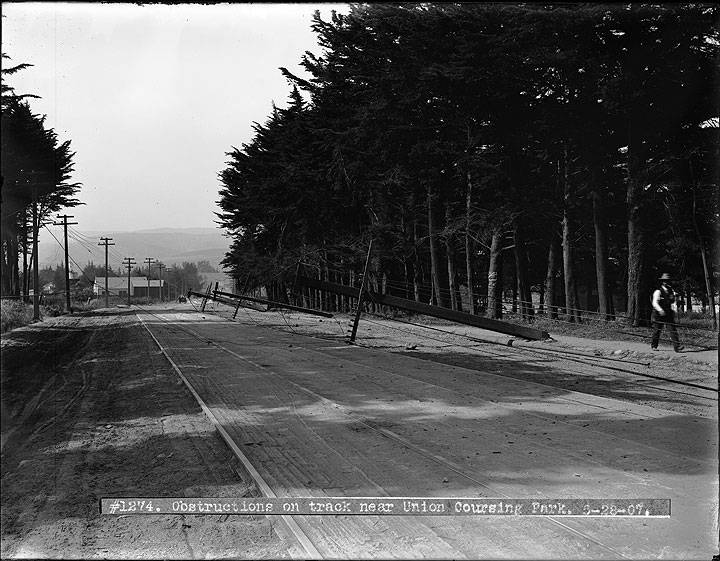 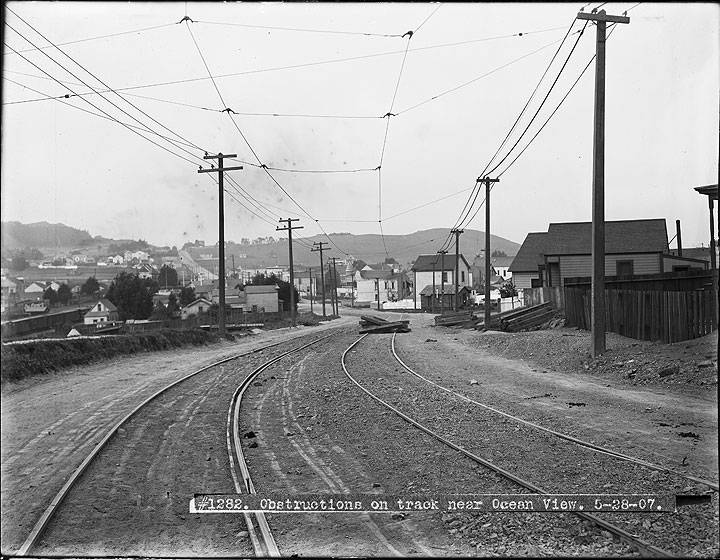 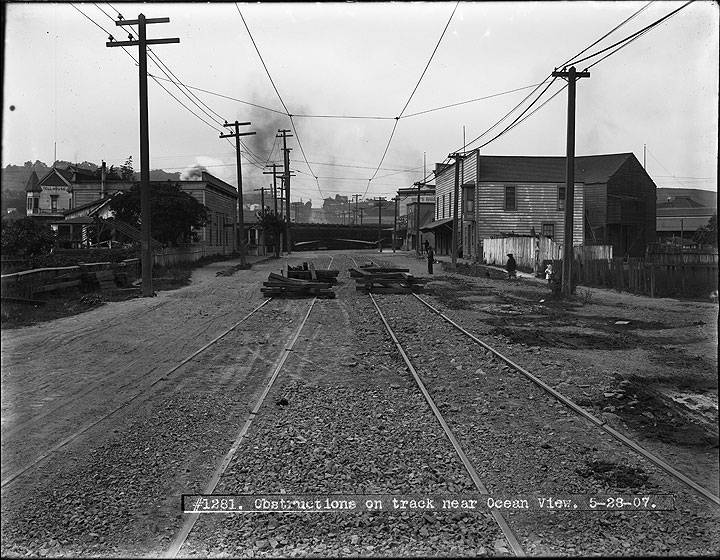 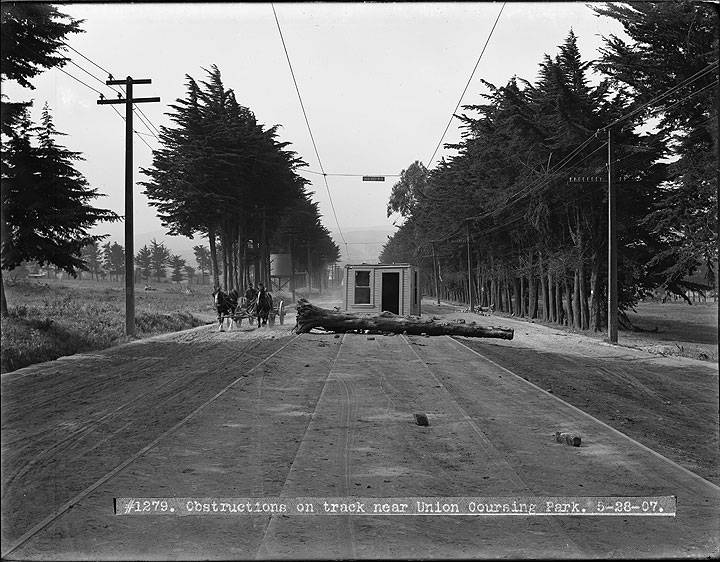 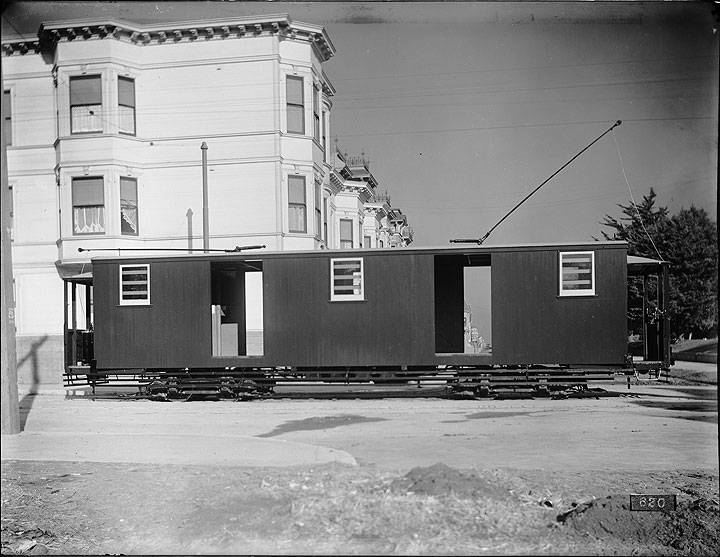 This streetcar was known as the "car of mystery" during the strike because it was used to transport strikebreakers to the carbarns where they stayed. This photo dates from Dec. 1, 1905.