originally published in It's About Times, the Abalone Alliance newspaper, July-August 1982 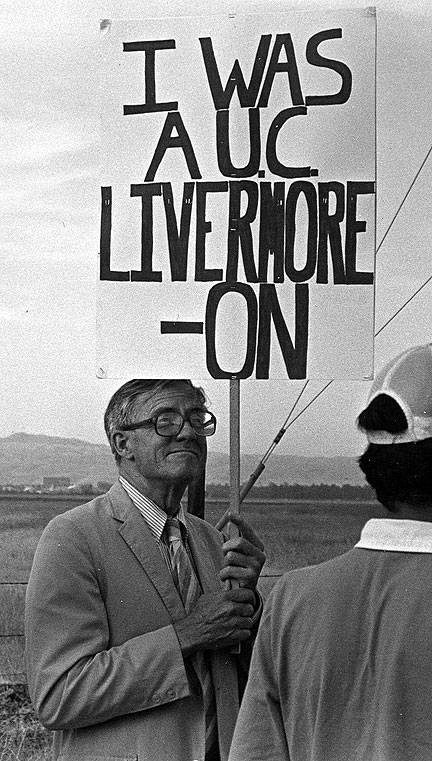 Even before the grey streaks of dawn announced yet another Monday morning, disarmers from all over California had blockaded every entrance to the Lawrence Livermore National Laboratory located 40 miles east of Oakland. Police began making arrests by 5:30 a.m., as cars full of Lab workers ground to a halt. The June 21 blockade was the fifth they had faced since February, and by far the largest.

To keep the blockade going as long as possible, demonstrators took to the streets in “waves.” As soon as each line of blockaders was arrested and taken away, a new line formed just down the road. Police then had to march over to it and, with dozens of cameras and legal observers recording their every move, go through the entire arrest ritual of announcing the code violation, posing for pictures, handcuffing and leading off each blockader individually. 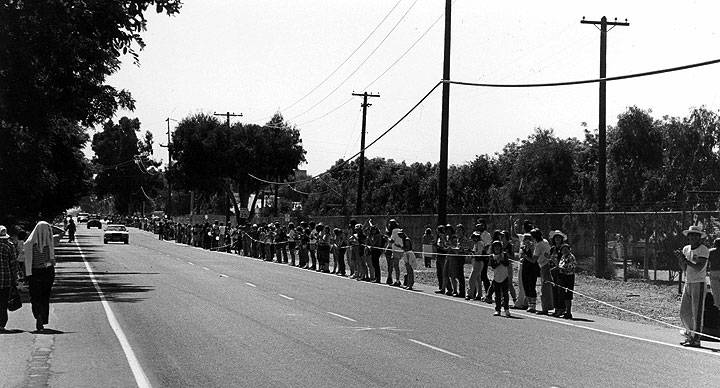 Anticipating this drama, the Livermore Action Group had created a role for a new type of blockader—the mingler. Minglers were blockade supporters who didn't intend to get arrested. They moved from one line of blockaders to the next, beefing up the lines and then moving off the streets when the police moved in, adding confusion to the authorities' situation.

To guard “national security” at the Lab, protection was imported from around the state. Besides the local Livermore police and reular Lab security, the University of California police, California Highway Patrol officers, Alameda County Sheriffs, Oakland City Police, the National Guard and even East Bay Regional Parks officers were called out. Assistant Lab Director Jack Kahn estimated Monday's security cost at $500,000 to $1,000,000 – an amount roughly equal to what the Lab spends on nuclear weapons development every working day.

The California Highway Patrol generally used a minimum of force in their arrests. But some of the other law enforcement officers, decked out in riot gear, couldn't seem to get into the nonviolent spirit of the action. They pushed, shoved, and used wrist locks unnecessarily. Some of the blockaders went along cooperatively, but some chose to be dragged away.

By 1:30 p.m. 1,332 of the approximately 4,000 protesters had been arrested, including 24 juveniles. The men were taken to Santa Rita jail and the women to a temporary facility at the Army's old Camp Parks site. The kids were released to the custody of their parents. Eighty-nine more blockaders were arrested the following day.

Arraignments began Tuesday morning. Charges were reduced to jaywalking in order to relieve the county of the cost of jury trials. The blockaders were let off for the time they had already served and all were free by midnight Wednesday.