Blacksmithery on 23rd and Treat 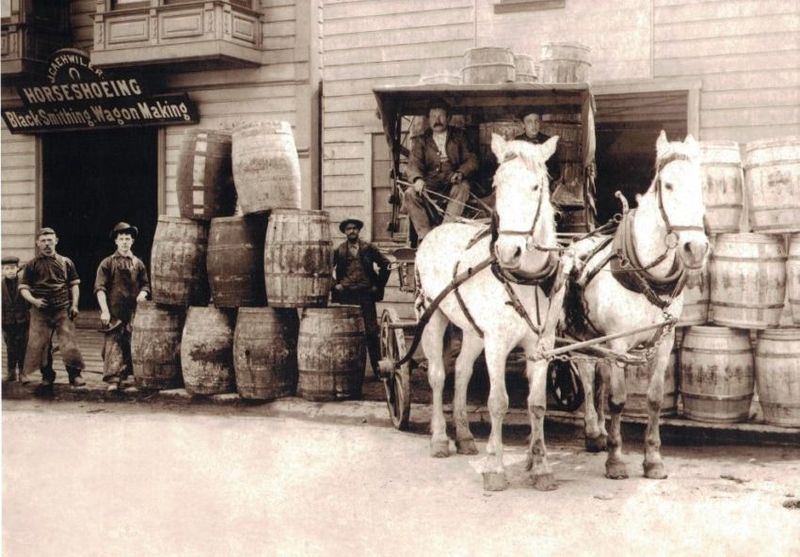 Two grey buildings on 23rd Street loom like tombstones across the bright green lawn of Parque Ninos Unidos. The two buildings, which share three addresses between them—3067, 3069 and 3071—are noticeable for their state of disrepair.

The rooms are empty, the upstairs windows shattered and exteriors are a motley pastiche of white and grey. Hastily applied patches of paint cover the graffiti that is regularly scrawled across the weather-beaten siding.

In 1995, the historic preservation staff of the San Francisco Planning Department conducted a survey of historic commercial and residential properties in the Mission, describing 3069-71, as “Stick/Eastlake” and noting that the apartment was “in good condition.” That was then; this is now. Both Food Not Bombs and the San Francisco Tenants Union include the abandoned apartment on their list of vacant buildings.

The number of vacant buildings on 23rd Street continues to grow: Yoga Props, a yoga supply store on the corner of Treat and 23rd Street, was evicted, making all of the properties on 23rd Street between Treat Avenue and Folsom Street empty.

Five buildings on the block – all now vacant – are owned by one family – the Gaehwilers. Only one business, Cal’s Automotive Center, remains. It is located at 1004 Treat Ave. It too, is being threatened with eviction. 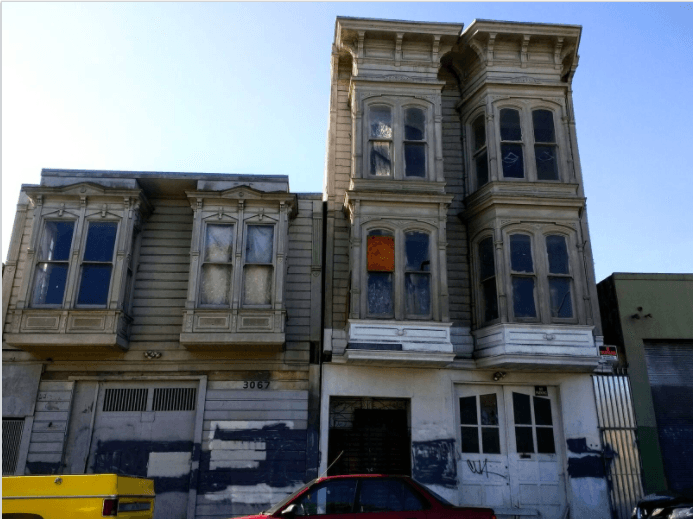 The properties on 23rd Street today.

Two of the most battered properties—3067 and 3069—have triggered 18 complaints and eight Notices of Violation from the Department of Building Inspection, some dating back to 2001. “These properties have been vacant and an ‘attractive nuisance’ for decades. The owners do not meet their responsibility for taking care of keeping sidewalks in front of them clean and in repair,” complained a Missionite on the neighborhood site Nextdoor.

According to neighbors on Nextdoor, squatters have been able to pry back the heavy boards, and enter the premises.

The doorways of 3069 and 71 are blocked by two heavy slabs of wood blocking both doors, a measure of security probably undertaken after the upstairs rooms were broken into and tagged with graffiti.

Graffiti isn’t the only writing on the walls of the property. In the right light it’s possible to see a faded sign on the walls of 3067. The name “John Gaehwiler,” appears in colors more muted than dust. Below that, painted on the frame of the double doors, is the sentence fragment, since 1902. 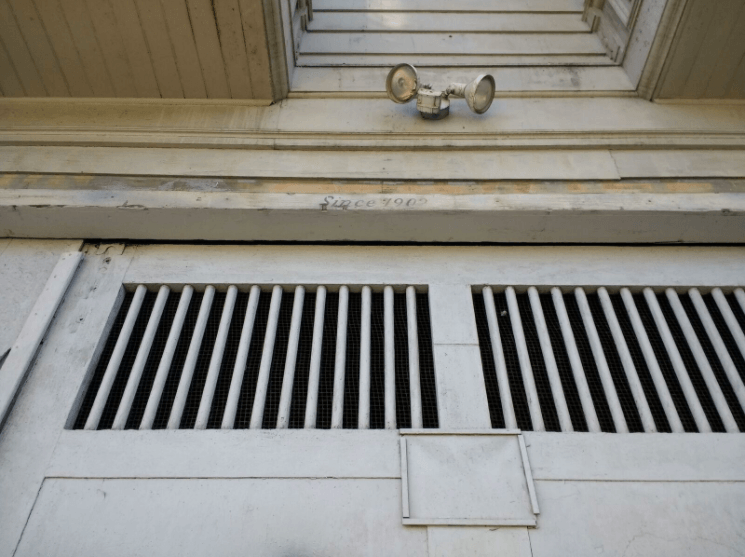 This enigmatic assertion marks the date that the John Gaehwiler, an immigrant from Switzerland began operating his own forge on 23rd Street, a site that had housed a blacksmith for more than a decade before Gaehwiler’s purchase.

In 1890, John P. Barnes, listed as a “horse shoer” opened shop there. Horses – the basic unit of transportation in the city – were everywhere in the streets of San Francisco, pulling streetcars, carriages and wagons, occasionally slipping their traces and running away, and often kicking blacksmiths (or unattended children) in the head, usually fatally, according to newspaper accounts.

They were stabled throughout the Mission in places like the Blackhawk Livery and Stables, the “leading stables of the Mission” located at Valencia Street between 20th and 21st. 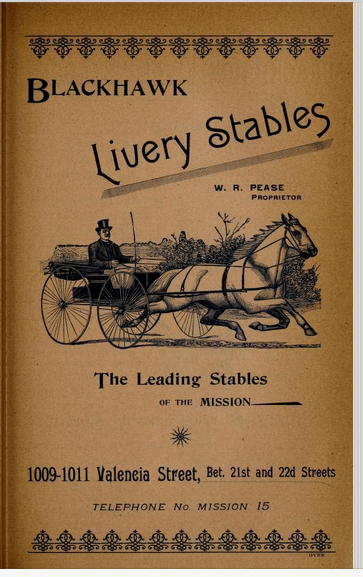 In 1899, Barnes sold the business to James D. Jeffers, another blacksmith. Jeffers lasted three years before selling the business to John Gaehwiler. Jeffers wanted out of more than his business. He committed suicide shortly after selling out by asphyxiating himself with gas, according to an article in the San Francisco Call.

Perhaps it was the competition that drove him to despair. The number of blacksmiths working in the city had grown. Eighteen of them were located within walking distance of his forge.

The Gaehwiler family showed more resilience than Jeffers, but may have had fewer competitors and more business, thanks to the 1906 earthquake.

The number of blacksmiths listed in the city directories dropped after the 1906 earthquake, many having lost business when the city crumbled. (Among them was my great-great grandfather James Creely, who managed to relocate to the corner of 21st and Folsom by 1908 after his SOMA smithy burned to the ground.)

In January of 1915, Gaehwiler opened a stable for four horses across the street on the corner of Treat and 23rd Street. It was one of eight stables – in one week– granted permits to build in the Mission. But despite the seeming demand, another sort of stable was on the horizon.

The Lotus Garage, an “auto livery”, opened on Valencia Street in 1918. More followed. By 1927 there were no more horse stables listed in the city directory for the Mission District and only eight horseshoers left in the Mission.

The Gaehwiler business turned to truck repair sometime before 1951. By 1956, no business was listed at 3067 23rd Street and only six blacksmiths still worked in the city. Today, only one— Klockars Blacksmith on Folsom Street—remains.

Nothing has re-opened in any of the vacant properties on 23rd Street. “It’s not illegal to have a vacant property,” Mike Gunnell, inspector for the Department of Building Inspection, said. He added that the property owners have been “a bit of a challenge” and have “seemed upset” when confronted with the city’s enforcement of building codes.

According to the Anti-Eviction Mapping Project, the John and Bertha Gaehwiler Family Trust used the Ellis Act, which allows landlords to exit the rental business, in 2001 to evict four tenants from 3067 and 3069.

Neighbor Patricia Delgado remembers the tenants who lived in 3067 23rd Street. “When we first moved here, in 1988, there was an old woman who lived there with her retarded son. The Gaehwilers moved them out. They’ve been derelict and empty ever since. Nobody has done anything to them for a long time. And it’s just sad.”

Tree Rubenstein, who lives down the street and runs the free food stand in Parque Ninos Unidos on Sunday, agrees. “It is simply immoral to allow properties to sit vacant for years when there are people living on the sidewalks. The system doesn’t work when landlords can do this.”

When I told Gunnell that Gaehwiler’s had owned 3067 and the adjoining properties for more than a century, he was surprised. “Maybe that’s why nothing happening with those buildings,” he said. “Long-time property owners tend to fight back a bit more.”

He went on to say that the perpetual vacancy of the Gaehwiler’s properties probably had more to do with the imbalance between city-imposed fines and personal wealth. “Property values are so high. Something like a $5,000 fine isn’t going to make much difference compared to the value of the property. It’s just cheaper to pay to register your property every year.”

Soon after the tenants were evicted, a homeless encampment sprung up. “Homeless people have been in and out of them for quite a while. The neighbors on the other side have reported hearing voices inside,” said Delgado, adding that on at least one occasion, there were reports of what looked like campfires in the building.

It’s not clear if any new business will be housed in the newly emptied space where Yoga Props opened in 1989. Calls to Heidi Barbarini, property manager for the trust and the daughter of John and Bertha Gaehwiler, were unreturned.

The Yoga Props sign has been taken down and tagging is beginning to take over the outside of the building, forming an almost solid series of lines and dashes that wraps around the rounded corner of the former storefront.

The only sign of life left on the street, is the hand-painted, rapidly fading advertisement—since 1902—a boast of longevity, written long ago about a family business that’s no longer there.