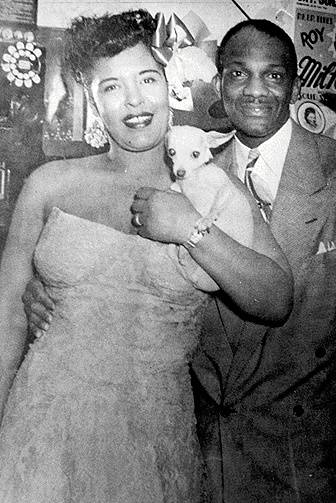 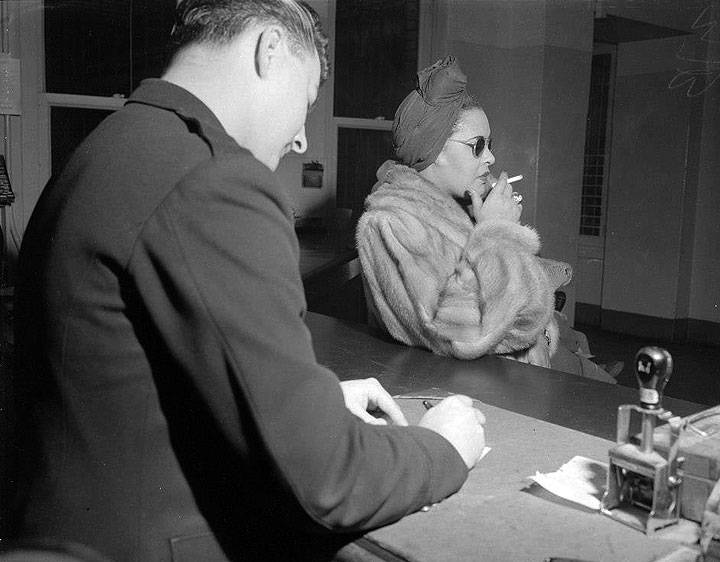 Billie Holiday at the Hall of Justice during her booking on a narcotics charge, 1949.

When jazz chanteuse Billie Holliday came to San Francisco in January, 1949, there was plenty of advance publicity. Billie had been involved in a bizarre New Year's Eve brawl in L.A. two weeks earlier, and was subsequently charged with three counts of assault with a deadly weapon. On the day of her preliminary hearing--January 13, 1949-- she opened at Joe Tenner's Cafe Society in the Fillmore District of San Francisco and played to a standing room only house.

The overflow crowd was attracted not just by Lady Day's exquisitely soulful croak, but by the rash of sleazy publicity surrounding the New Year's Eve brawl, which rekindled Billie's reputation as Crime Queen of the jazz set. (She had faced several narcotics raps during the 1940's.)

The altercation had taken place at Billy Berg's nightclub in L.A. Billie had finished her first set and was walking through the club's kitchen where the club owner's friends were partying, when one of the partiers got fresh with her as she went by. Billie complained to her manager/husband John Levy, who charged into the kitchen and demanded an explanation. The ensuing argument quickly escalated into a brawl, with Levy lunging with a carving knife and implanting it in the wrong man's shoulder, while Billie savagely flung plates, dishes, and whatever cookware she could find at the malefactor and his confederates. As the brawl continued in the kitchen, Levy's victim charged into the club and jumped up on the bandstand, the knife still stuck in his shoulder. The band leader, Red Norvo, shouted for the band to keep playing, which it did, until the police arrived... 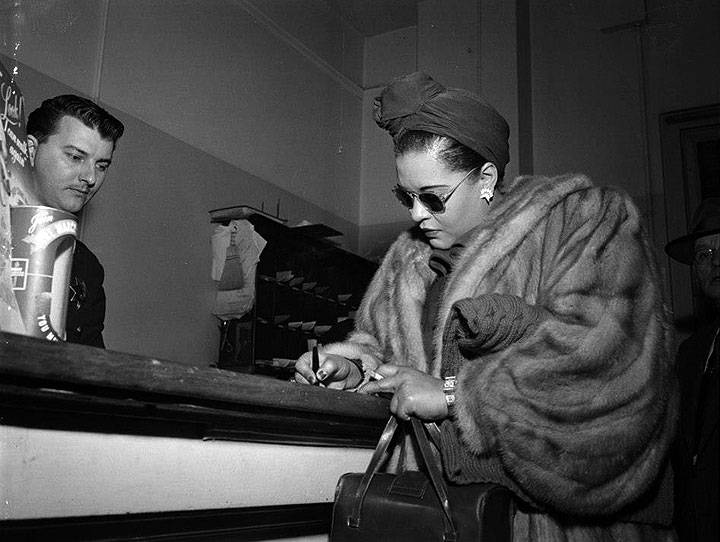 Billie Holiday signing her papers at Hall of Justice.

A little over a week after her arrival in San Francisco, Billie found herself generating more crime page headlines. Agents from the Federal Bureau of Narcotics raided her room at the Mark Twain Hotel, where they claimed to find a small amount of opium worth less than fifty dollars and an accompanying pipe. When charged at the Hall of Justice, Billie and John Levy denied any knowledge of the drug, claiming they had been set up. If they were, maybe it was by the club owners; the next day's S.F. Chronicle front-page headline read Billie Holiday is held on opium charge. The publicity, along with the notoriety generated by the L.A. brawl and bust, made the rest of her San Francisco tour a smashing success. 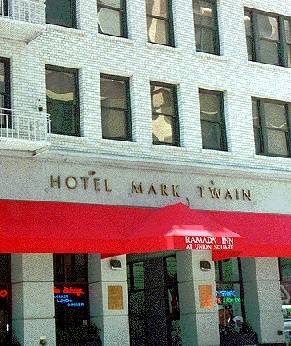 The Mark Twain Hotel on Taylor Street in the mid-1990s.
Photo: Chris Carlsson