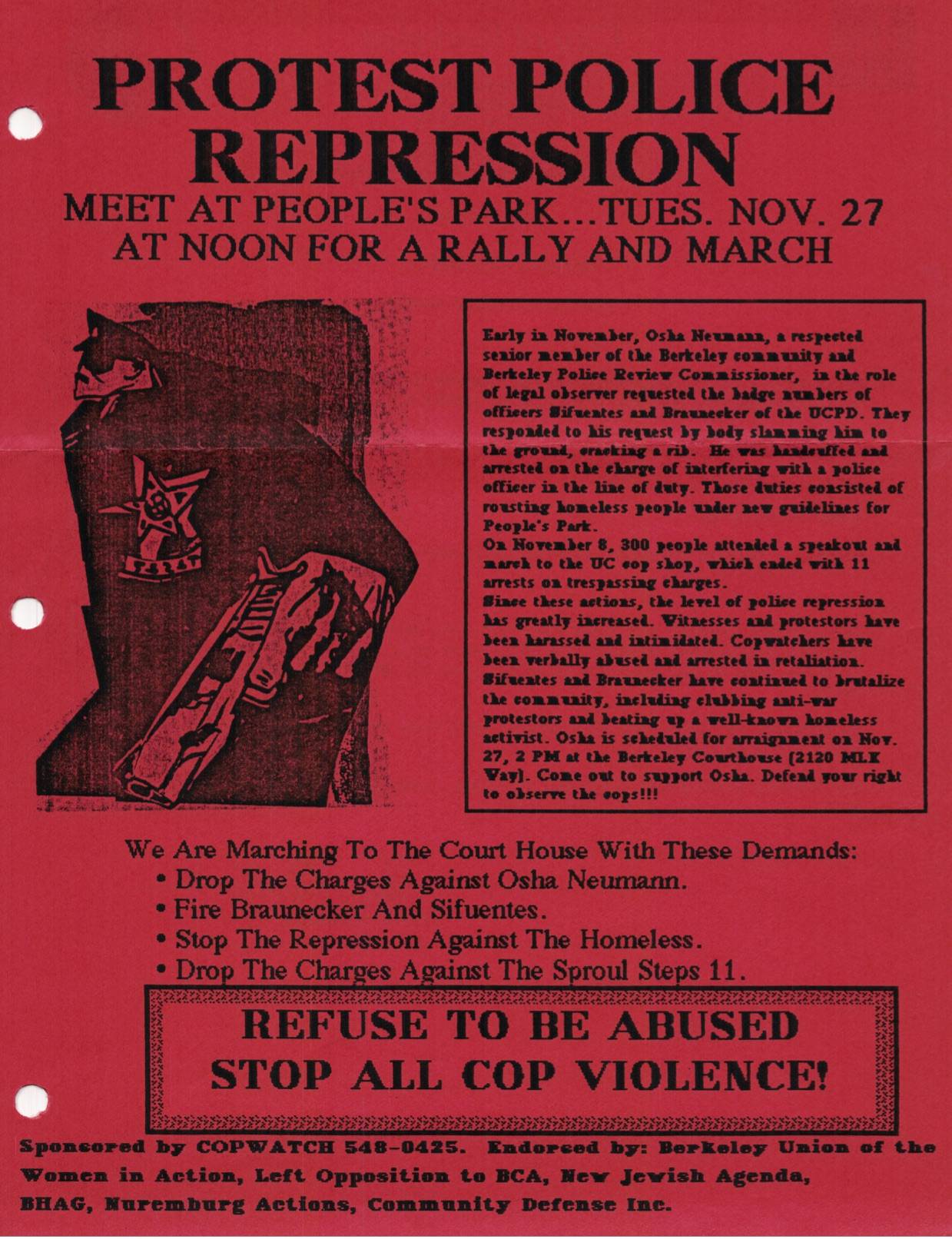 Berkeley Copwatch is a group of community and student volunteers dedicated to ending police brutality and demanding accountability for police wrongdoing. Since the grassroots organization was founded in 1990, Copwatch has worked diligently to build a community that is educated on their rights and is willing to assert them in the service of those more vulnerable to police violence. The idea behind Copwatch is that by building a community which is well-informed on their rights and actively takes to the streets to monitor police behavior, police will be deterred from violating the rights of Berkeley citizens because they know they will be held accountable.

The Formation of Copwatch
Andrea Prichett, a founding member of Berkeley Copwatch, was inspired and influenced by a trip to South Africa where she participated in a program called Priwelpro (Prison Welfare Project). During her time in South Africa, she was introduced to the idea of community support for detainees and “copwatching”. She felt there was a need for similar organizing back in Berkeley. Ironically, Andrea’s inspiration came not from the Black Panther Party of Oakland, but instead from cop watching organizations in South Africa. Prichett, who graduated in Political Science from UC Berkeley, had hardly heard of the Panthers when she started Berkeley Copwatch—a fact that says more about the type of education Berkeley was doling out than it does about the Panthers. Nonetheless, Copwatch cannot be separated from its radical proximities—past and present— of the East Bay. While not affiliated with the Black Panthers, Copwatch certainly draws on their legacy as a group of community volunteers dedicated to ending police brutality.

Copwatch’s mission statement has remained consistent for the past 27 years—a testament to the organization’s original vision and sustained community presence and utility in Berkeley. Copwatch formed at a crucial time when the militarization of police became cause for alarm. Berkeley in the 1980’s & 1990’s looked radically different than it does in 2016. Housing was more affordable (in part due to the emergence of the Berkeley Tenants Union in the 1970s), the university was more affordable, and cooperatives dominated the market for everything from food to clothing. Berkeley was an active and engaged community shaped by progressive ideals. Spring was deemed “riot season” as community activists readily took to the streets to exercise their first-amendment rights. Violent, militarized police have never been seen as a benevolent force in Berkeley’s radical history.

The 1990s in Berkeley were dubbed a time of “culture wars,” during which the city was transformed by the homogenizing forces of gentrification. Developers sought to remake Telegraph Avenue into a haven for the elite, and flexed their bank accounts to influence city council. The popular psychedelic rock band “The Grateful Dead” was banned from the Greek Theater. Policing became more aggressive and quickly became the most efficient means of supplanting Berkeley’s liberal, counter cultural community with a wealthy elite.

For the three women that started Berkeley Copwatch—enough was enough. Andrea Prichett, Susanne Pegas, and Danielle Storer were ready to empower the Berkeley community to resist state-sanctioned violence—primed for their new organization by years of student activism and encounters with the police on many fronts. Adhering to the doctrine of non-violence, the women sought to form an organization that would provide Berkeley residents with a means of directly challenging the police state and demanding accountability for police abuse.

People’s Park became a locus of resistance as the site of numerous showdowns between the homeless and the Berkeley Police. Copwatch’s first press release in January 1990 was concerned with escalating police violence at People’s Park, entitled “People’s Free Box Under Attack,” and the first Copwatch-sponsored community meeting was entitled “Community Meeting: People’s Park Clean-Up” on January 29, 1990. Copwatch, from its beginnings, was focused on much more than ending police violence. Berkeley Copwatch has consistently sought to meet the neglected needs of the community, to provide resources to those who lacked access, and to educate and engage community members who are willing to take action against city policies that criminalize poverty. In December 2016, Copwatch has been diligently following and publicizing the repeated raids on a local homeless encampment, echoing the sentiments expressed in 1990 as “the city is stalling while the police wage war on homeless people.”

The 1990s to 2017
The need for Copwatch has by no means diminished in the past 27 years. The functions of Copwatch and the services it seeks to provide to the community have evolved to meet the changing needs of a diverse community. Copwatch’s greatest success has been in cultivating a community consciousness on issues related to police brutality through education efforts such as Know-Your-Rights trainings and consistent press releases. Since 1996, the Copwatch Decal, a student-taught course at UC Berkeley, has been a consistent means of educating and engaging the public on issues related to policing in Berkeley.

In regards to the organization’s leadership, Copwatch has been mostly white and women-led, which has been a limitation in some regards. For the most part, the leadership has been reflective of the population demographics in Berkeley. It is important to recognize, however, that the homeless population in Berkeley is majority white, but African Americans are overrepresented among the homeless of Berkeley if one considers their proportion of Berkeley’s total population. Copwatch recognizes the contradictions of white leadership, and welcomes any volunteers seeking to get involved in anti-police brutality work. The organization holds close ties with the Black radical organizations of the Bay Area. Andrea Prichett, a founding member, recently sat on a panel discussing copwatching in the modern era that commemorated the 50th anniversary of the Black Panthers in Oakland. Copwatch is also deeply involved in coalition work with Black-led groups like Anti-Police Terror Project and Critical Resistance, both of which are based in Oakland.

Responding to the police murder of Kayla Moore in 2013, Copwatch prepared a detailed People’s Investigation of the In-Custody Death of Kayla Moore after police refused to release the police report documenting the murder, thereby delaying any criminal cases against individual officers. The People’s Investigation is complete with witness accounts, and goes into depth on the numerous violations of police protocol and policy in the events leading up to the death of Kayla Moore. Due to negligence and deliberate delay on behalf of the BPD, no officers were held accountable for the murder. The Moore family is currently in court proceedings for a civil case against the City of Berkeley. 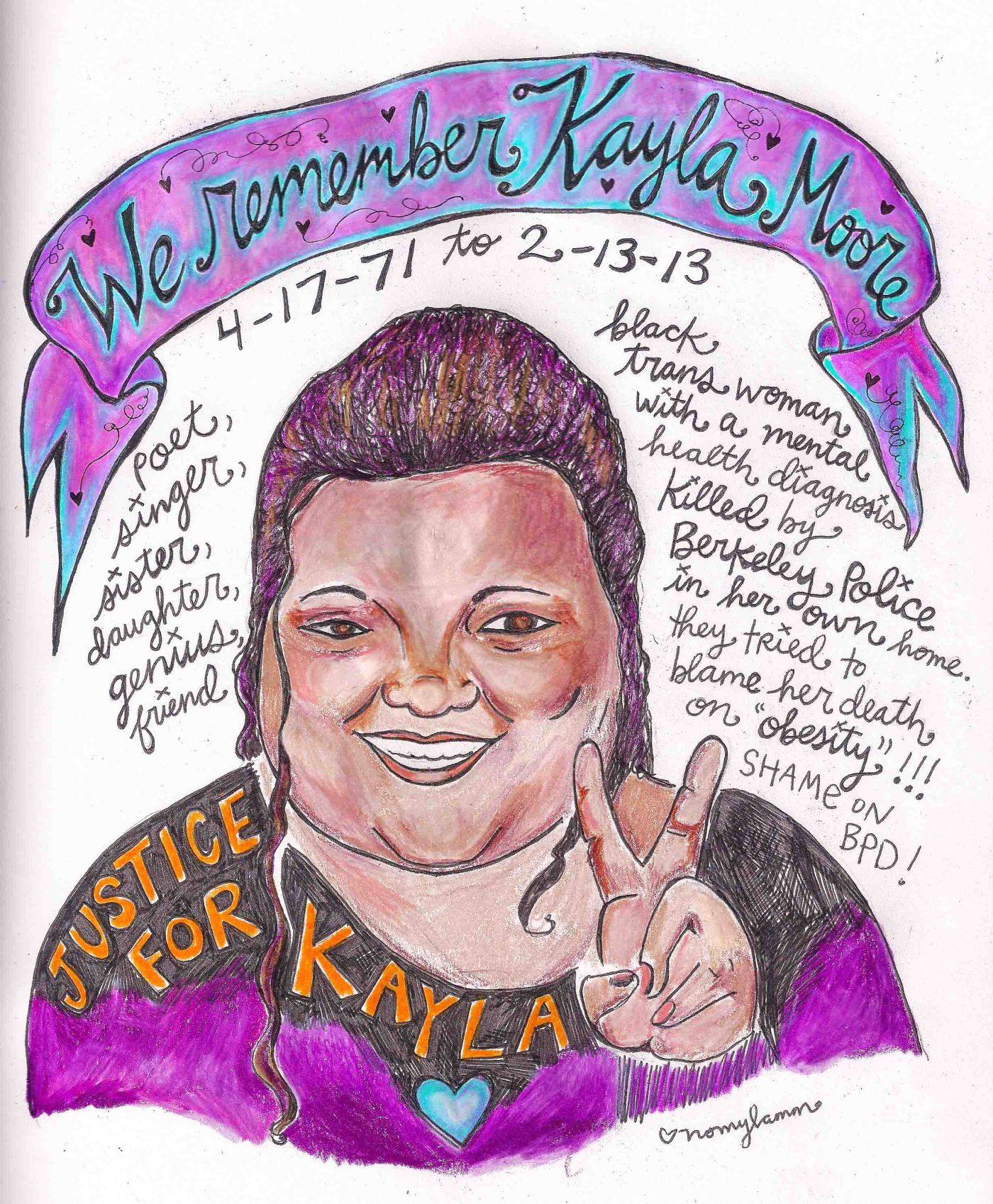 Following the December 2014 Black Lives Matter protests in Berkeley, Copwatch conducted another People’s Investigation, this time using social media, youtube, and other live-streaming technology to create a timeline of the events of December 6th and 7th. The timeline documents numerous instances of police violence. The investigation aims to draw attention to individual officers implicated in the videos, as well as raise questions as to BPD’s intention in tear gassing, beating, and arresting otherwise peaceful protestors. 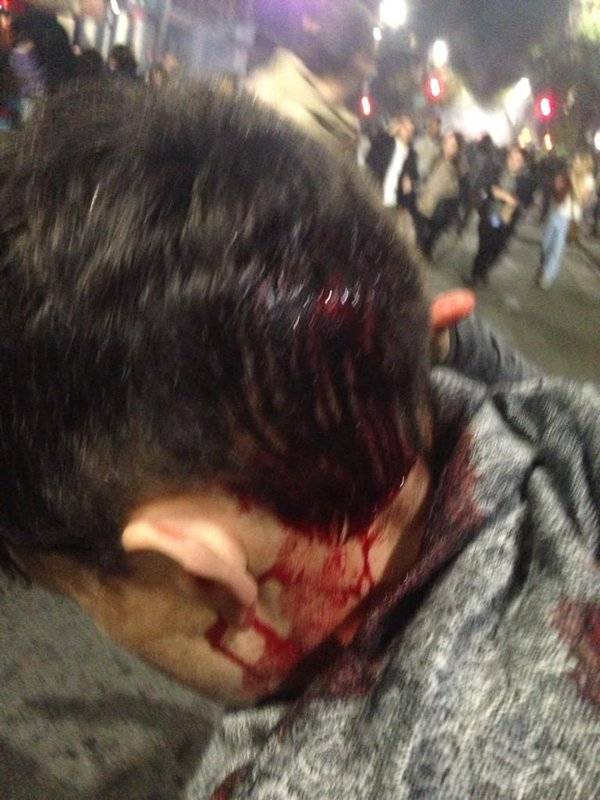 Cindy Pinkus, an intern minister at the First Unitarian Universalist Society of San Francisco, was struck in the head by police with a baton, causing her to be hospitalized and receive staples to treat her injury.

Copwatch today confronts several major challenges as it continues to work with victims of police violence and attempts to halt further militarization. One of the main issues confronting the organization is the lack of reliable avenues to report police abuses. The Police Review Commission was once an effective civilian police review board that would review complaints and demand action be taken against the offending officers. In its present conception, the PRC is little more than a façade for police accountability—it is staffed by the family of Berkeley cops, veiled in secrecy, and rarely demands accountability for police wrongdoing. Without this important civilian oversight board, Berkeley Copwatch can do little to demand justice for victims of police abuse, rendering any attempts to encourage patrons to file reports useless.

Perhaps the most daunting challenge Copwatch faces today is merely surviving amid the mounting surveillance state. Not only does the act of Copwatching itself become more dangerous as the police continue to militarize, but there is also a misconception that the police no longer need to be filmed since most police are now equipped with body cameras. Body Cameras are quickly becoming yet another surveillance tool whereby footage is not made available to the public, rather, it is used by police departments selectively to advance the police agenda, not the community agenda. It is therefore of the utmost importance for community members to remain vigilant and maintain personal recordings of the police, AKA keep copwatching!

Copwatch navigates a complex terrain when faced with the dichotomy between reformist and abolitionist organizations in the realm of grassroots resistance seeking either police reform or abolition of the police. By demanding accountability for police wrong doing, Copwatch implicates itself in the system it seeks to destroy. The ultimate goal of Copwatch is to support community-based alternatives to police, which is an abolitionist ideal. Andrea Prichett suggested that Copwatch is a sort of “pre-revolutionary structure” in the sense that it lacks an explicit political philosophy, but because the “police department is a paramilitary organization designed to control you and stop you from dissenting, it is the first thing that needs to be resisted.” In this sense, Copwatch is a reformist organization responding to immediate injustice, which, in doing so, lays the groundwork for revolutionary consciousness-building as the need for the abolition of the police becomes irrefutable.

Looking to the future, Andrea Prichett has a vision for Copwatch that will bring the organization into the age of technology. Prichett envisions an open-platform database where users will be able to upload complaints, violation reports, video footage, all traced to specific officers who violate their code of conduct. The idea behind the database is to circumvent the Police Review Commission and other abuse-reporting avenues that go through the police department, where they end up on someone’s desk and disciplinary action is rarely taken. The database would enable citizens to hold individual officers accountable by allowing citizens to aggregate their complaints so as to get an indication of which officers are prone to violence with the ultimate goal of holding such officers accountable.