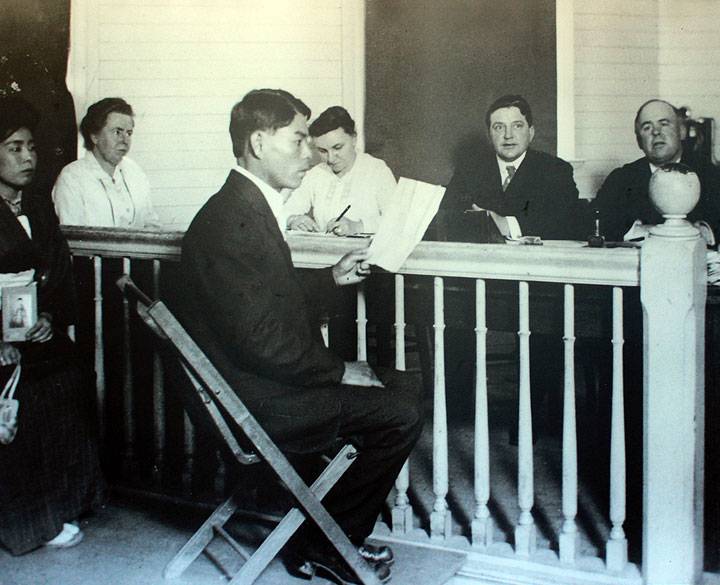 The Chinese immigrant's "interview" with the Bureau of Immigration on Angel Island in the 1920s.

An organized group of Chinese detainees calling itself the "Self-Governing Association" served as a link in a communication system between the Angel Island Immigration Station and the San Francisco Chinese community. Most of these activities concerned coaching messages addressed to individual detainees, 47 and communications in the reverse direction were sometimes accomplished.

The communications system depended upon the cooperation of Chinese employees at the station. The largely Chinese kitchen help would visit San Francisco's Chinatown on their days off. There they picked up coaching messages at certain stores, which they smuggled into the station for small fees. Various methods were then used to deliver the messages from the kitchen to the intended recipient. Most often they were passed at mealtimes to the table closest to the kitchen where the association's officers sat. A waiter, for example, would serve an added dish of food and say ga choi (Cantonese for "added dish") or some similar phrase. This would be a signal to look for a hidden message which another could later deliver to the addressee. The association's officers also had a mutual understanding that if a guard were to detect the presence of a message, they would prevent its confiscation so that it could not be used as material evidence to jeopardize someone's entry to the country.

In 1928 one such incident made newspaper headlines. A matron escorting the Chinese women into the dining room saw a girl pick up a folded piece of paper which had been dropped by one of the men filing out of the dining room. Suspecting it to be a coaching message, she snatched the paper from the girl, but the men quickly turned, seized the matron, and destroyed the physical evidence.48

The Chinese association enjoyed the support of the detainees because it filled a need and fostered a sense of unity among the disparate individuals sharing only one common goal--entering the United States--who were thrown together thousands of miles from their native China. This explains why, despite the one-way traffic (most Chinese went through the station only once) and highly transient population in the dormitory, the association was able to maintain itself for three decades until 1952 or so when Chinese arrivals were no longer detained en masse for hearings.

The immigrant's hearing on his application for admission was the main reason for his detainment at the Angel Island barracks, and sometime after he arrived, he received a summons to appear for this session. During the early years at the center this waiting period could stretch into months, which became the cause of many complaints.49 By the mid-1920's, however, the delay averaged about two or three weeks. The immigrant's success in hurdling the hearing barrier determined whether the applicant would be admitted to the U.S. or face deportation back to China, and thus it was an important event which could shape the direction of one's entire life.

Regardless of the validity of the Chinese arrival's claim for entry, he expected to be interrogated intensively, and in anticipation, the applicant studied coaching information during the weeks and months preceding his transpacific voyage so as to commit to memory facts pertinent to his family, home life, and native village. The required information was often extremely detailed, and the coaching papers might be a booklet with several dozen pages. This was particularly true in cases where the applicant and his witnesses claimed relationships which were fictitious. Coaching papers were frequently taken aboard ship for review and thrown overboard or destroyed as the ship approached the American harbor. 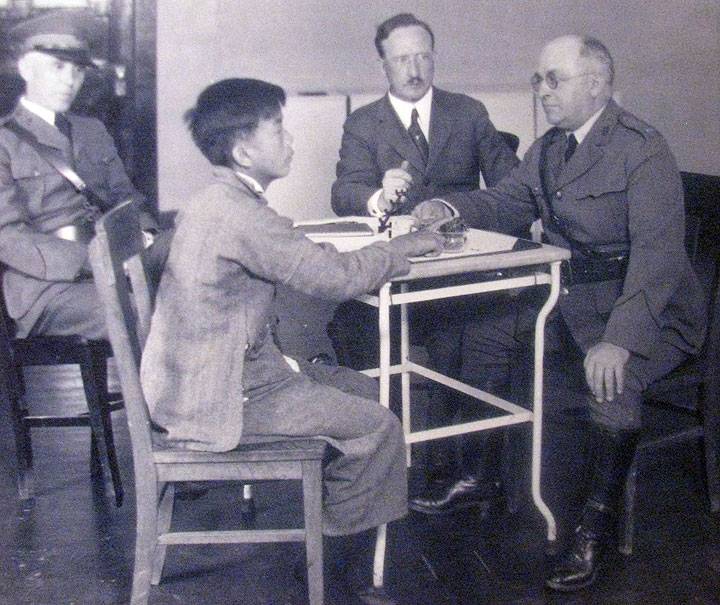 The Chinese immigrant's interrogation with the Bureau of Immigration on Angel Island in the 1920s.

During the early years, the conduct and procedure for examining applicants and witnesses produced numerous complaints of unfairness from the Chinese, but in 1919 the procedure was changed, and the new boards of special inquiry for Chinese cases put them on the same footing as other aliens. The resulting board of special inquiry was made up of two inspectors, one of whom was the chairman who asked most of the questions, plus a stenographer. This board was not bound by technical rules of procedure or evidence as applied by courts. The Purpose of the hearing was to determine if the applicant was entitled to enter the United States under the exclusion acts and general immigration laws.50

Many Chinese entered the country as members of the exempt classes, but by far the greater number applied for entry by claiming citizenship by birth or by derivation.51 Because the majority of Chinese cases involved issues of relationship or American birth and because independent evidence and documents usually did not exist to corroborate or disprove the claims, the scope and method of examination for Chinese cases were different from that applied to other nationalities of immigrants. Evidence was often confined to the testimony offered by the applicant and his witnesses, and the objective of the board was to ascertain the validity of this evidence by cross-examination and comparison of testimony on every matter which might reasonably tend to show whether or not the claim was valid.52 Under these guidelines the board of inquiry had great latitude in pursuing its interrogation.

Some inspectors were strict but fair; others delighted in matching wits with the interrogee; still others were thorough and meticulous. The type of question asked often depended on the case and the chairman's individual style. Over the years, one of the persistent complaints of the Chinese were questions of minute details which apparently had no relevance to the objectives of the board.53 Some questions would have been difficult for anyone to answer even under normal circumstances: How many times a year were letters received from a person's father! How did a person's father send the money to travel to the U.S.! How many steps were there at the front door of a person's house? Who lived in the third house in the second row of houses in the village? Of what material was the flooring in the bedroom of a person's house? What was the location of the kitchen rice bin!

Because Chinese immigrants usually did not understand English and the inspectors did not speak fluent Chinese, an interpreter was needed at the hearing proceedings. In order to forestall collusion between the applicant and witnesses, a different interpreter was used for each session. At the end of each session the board chairman would usually ask the interpreter to identify the dialect in which the answers were being made in order to ascertain whether the applicant and witnesses alleged to be members of the same family were speaking the same dialect.

Sometimes applicants and witnesses were recalled and reinterrogated about questionable points. A typical proceeding usually lasted two or three days. During these interrogations, memories might fail, wrong answers might be given, and unforeseen questions might be asked. Hence it was often necessary to smuggle coaching information into the detention quarters to eliminate inconsistencies in answers.

If the testimony of the applicant largely corroborated that of the witnesses, the authorities admitted him into the country. If an unfavorable decision was handed down, the applicant's family had the choice of allowing him to be deported to China or of appealing to higher authorities in Washington, D.C. or to the courts to reverse the judgment.54 As a result some immigrants languished under detention on Angel Island for as long as two years before their cases were finally decided.