An odd assortment of pets entered and left our lives while we lived on Le Conte Avenue. The first—I remember them clearly—were a rooster and a hen called Sam and Annie. How my parents, my father from Persia, my mother from Turkey, came up with these American names still puzzles me. Besides Sam’s confident crowing and Annie’s contented clucks we enjoyed fresh eggs. Baby chicks appeared. I still recall the smell of chicken feed set in pans in the attic where they spent their first few days. Anita, a three-year old, was absorbed in the chicks. She must have imagined she was their mother, tending to their feeding. Alas, one day in her concern that they get enough water she held them in the bowl, urging them to drink. They all drowned. A pullet joined Sam and Annie. Suddenly they all disappeared. They may have reappeared in one of our dinners without our suspecting anything.

Next came a rabbit. At dinner one night Anita suddenly looked up from her plate and, staring hard at my mother, asked what it was that we were eating. “Chicken,” she replied, her face reddening. Anita didn’t believe her. She rushed out to the back yard. The rabbit and its hutch were gone. Returning she accused Mama of murder. Mama had to admit that we were indeed dining on rabbit but that she hadn’t killed it. It seems she had turned it over to Peter Lunardelli, one of our playmates who lived up the street and whose older brother Inocho was a butcher by trade. He was the one who actually handled its demise. Anita burst into tears. In a lame try to get her to see a bright side I suggested she make a purse out of the fur, something that was fashionable at the time. Almost in hysterics she accused us all of being murderers and ran from the table. I was sorry and ashamed that I’d spoken but my intentions had been good. 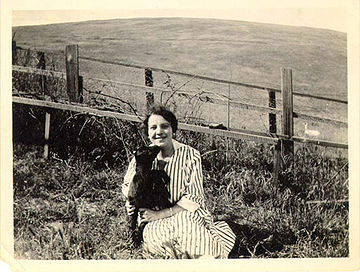 This undated image shows a woman with a young goat in Visitacion Valley.

Coming home from school one afternoon, we children found a goat tethered in the back yard. It wasn’t with us very long. It may have become more trouble than it was worth, munching on the vegetables and flowers in our garden. Its fate was obscure but I remember that Mr. Torres, the neighborhood’s handyman who lived with his many children on the slope of the hill above San Bruno Avenue, had a goat for a time. He gave our next door neighbor, Mrs. Zarosi, a goat’s head which she roasted. There may or may not have been a connection. 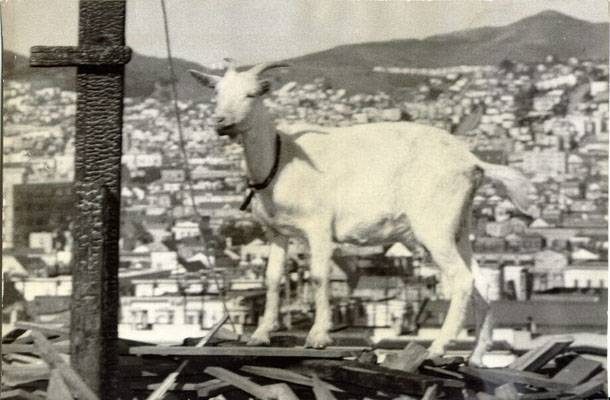 This is one of 18 goats belonging to Ms. Estelle West on Potrero Hill in 1951.

A couple of mallard ducks took over the backyard for a while. The male was beautiful with his satiny-green head, white neck ring, reddish chest and brown body. The pair splashed away in their swimming pool which was a barrel of water. Then they disappeared. Perhaps they flew away and joined a migratory flock.

There may be another explanation. On the east side of our house lived Mrs. Guadangnati. She had a large dark-grey striped cat which was usually seen speeding down the back steps while Mrs. Guadangnati from her doorway screamed “sporcaciona.” I assumed that was the cat’s name and that “sporcaciona” might be responsible for mysterious disappearances. Years later during the study of Italian language I learned that Mrs. G. was actually cursing the cat, calling her a very large dirt bag of the female persuasion.

The one animal I loved was a black and white spaniel my mother gave me when I was about six years old. His soft floppy ears and warm brown eyes won me. I named him Spotty. He accompanied me everywhere. The grassy space that separated the houses on each side of the street was dug up in anticipation of being paved. Rains caused deep ruts and clods of mud. I always carried Spotty when crossing the street so that he wouldn’t hurt his paws. One afternoon, coming home from school, I saw Spotty at the half-open living room window, his paws on the sill, obviously waiting for someone. As soon as I reached the bottom of our driveway he jumped out, a one-story leap. Miraculously he wasn’t injured. I knew then that he loved me as much as I loved him.

The summer I turned ten I spent in bed as a result of a serious auto accident which had left me with broken arms, broken ribs and stitches on my neck and lip. And that summer Spotty got what we called the fits”; he had to be put down. In those days pets were fed table scraps. His diet may have had something to do with his illness. To lift my spirits my mother went to a pet shop and returned with a golden Pekinese. I hated that dog on sight. He sat on a chair in my bedroom, pop eyes glowing malevolently,. He snapped at anyone who approached him. I didn’t want to hurt my mother’s feelings so I tried to work up interest in the Peke whom I never bothered to name. My mother sensed my lack of interest and returned the dog to the shop. Then Hakob, a friend of the family, brought over his pet, a non-descript hound he called Litzie. She depressed me and I think she sensed it. Fortunately, Hakob detected a lack of rapport and when he left, Litzie went with him. After that, my mother and I reached a tacit agreement: Spotty was irreplaceable and I would be all right without another dog.

Anita acquired a canary which she named Annie. In the course of time Annie disappeared; no doubt she found an open window and flew out. We all sang, “Annie doesn’t live here anymore,” a popular song of that time. * A pair of darling furry pups from a neighbor’s litter found their way to our house. They were called Atisket and Atasket after the song Ella Fitzgerald sang that year. They belonged to Haig and Violet, my younger brother and sister. Suddenly, they were gone and no one remembers what happened to them.

When I reached the age of ten I was eligible for an adult’s library card that allowed me to take out four books at a time instead of two which had been limiting. Engrossed in reading I lost interest in pets.

In retrospect I wonder about the number and variety that passed through our lives. With five children and the work it entailed—endless laundry run through the Maytag’s ringer, hung out to dry on a clothes line, then the ironing, not to mention five lunches every school day plus breakfast and dinner—why did my mother adding the care of animals, except to please her children. And why chicken, goats and ducks? Had my father envisioned a profitable sideline in farming? I’ll never know.

Annie doesn’t live here anymore. Might have been your picture that she tore.

She was oh so faithful, What a Pitiful sight as she waited for the letter that you

Promised to Write; a gentleman in a top hat came around the other night. 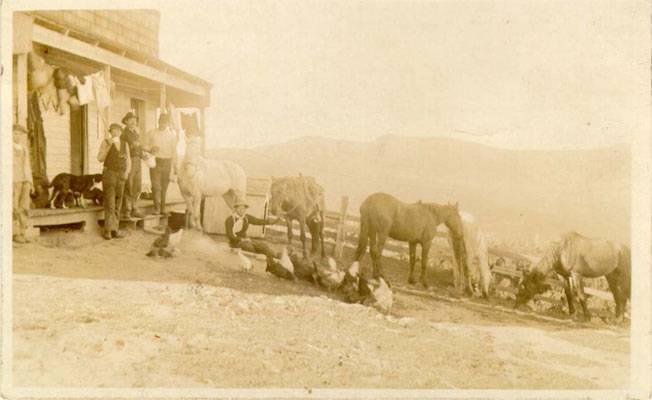 Horses, chickens, and dogs in Visitacion Valley, no date.