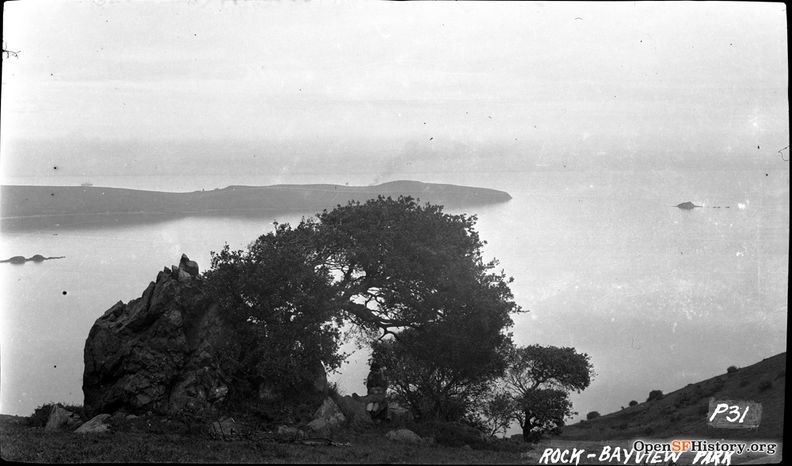 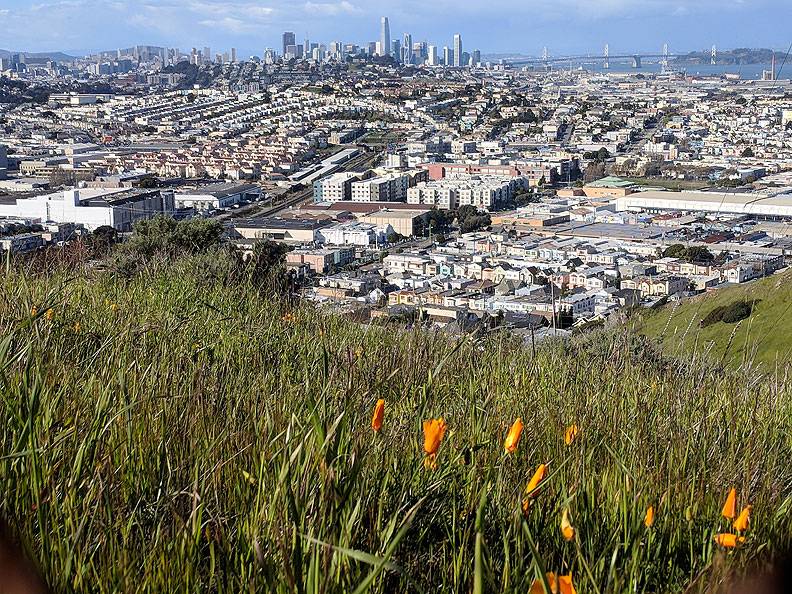 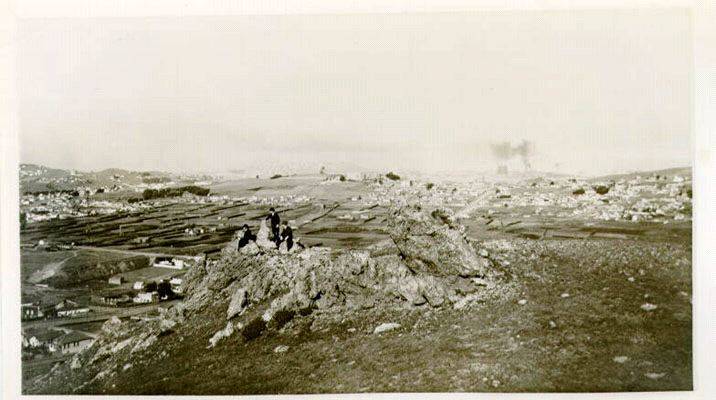 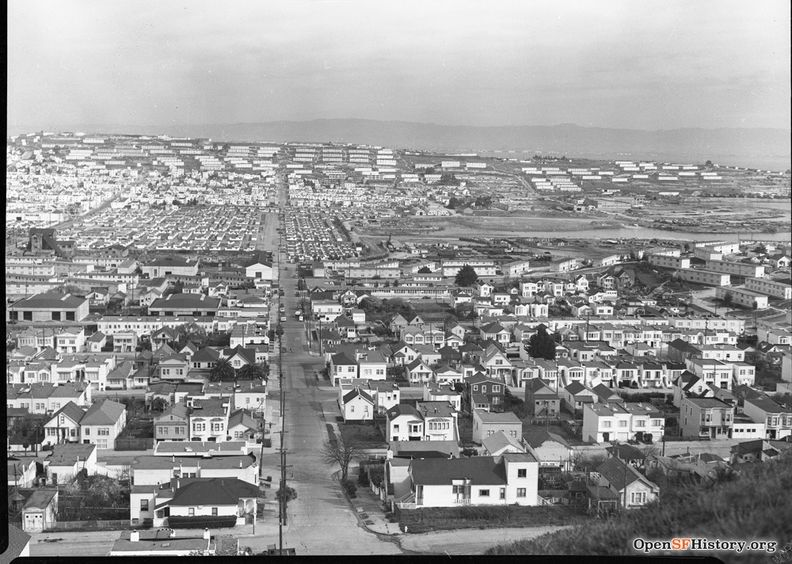 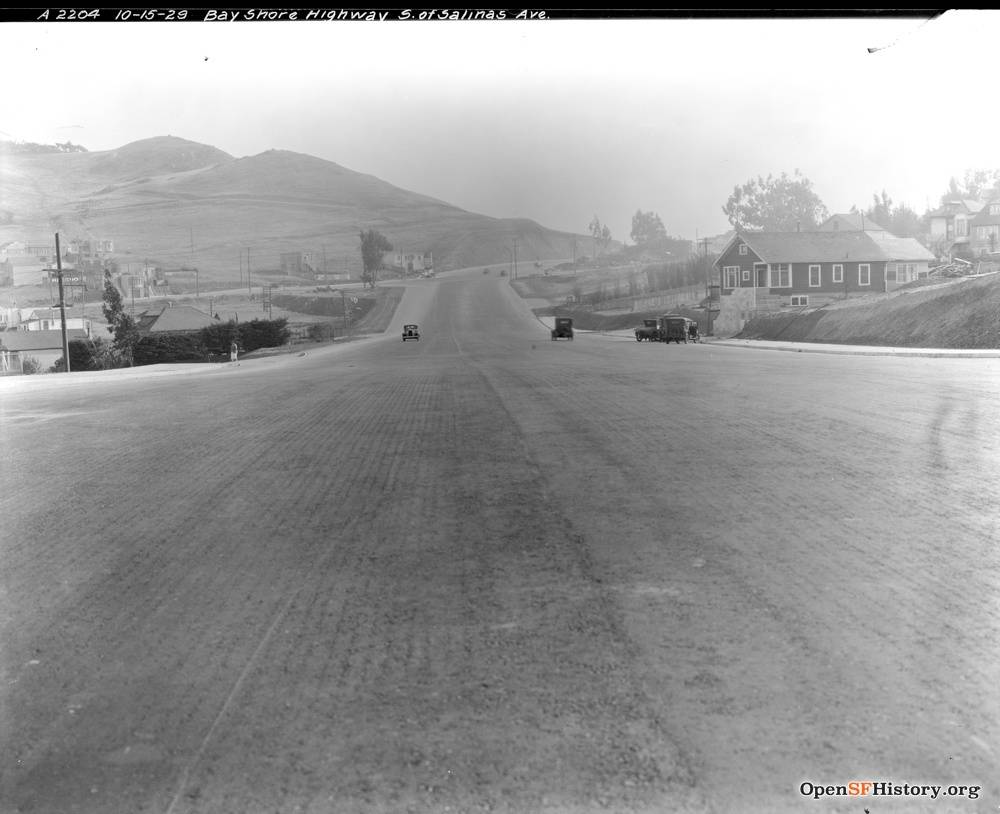 Third Street extending to Bay View Hill, c. 1929. To the left of this picture lies Candlestick Point, which eventually became the site of Candlestick Park after a series of financial and political manipulations in the late 1950s. 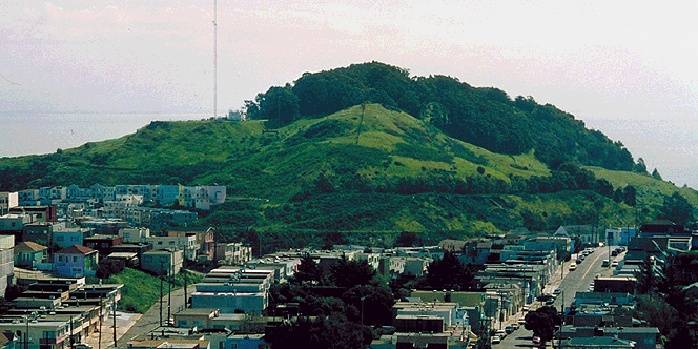 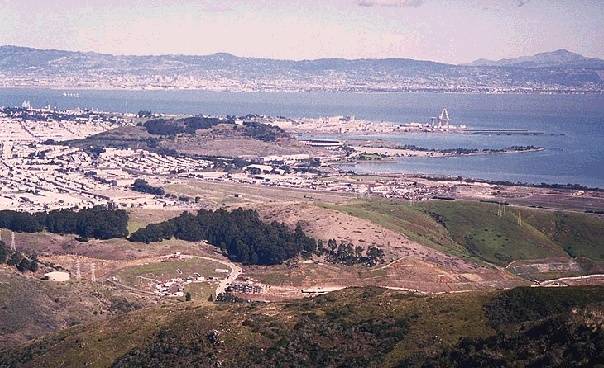 Bayview Hill and Hunters Point shipyard seen from San Bruno Mountain. Candlestick is visible to the right of Bayview Hill, and the former naval shipyard (now an EPA Superfund site) sprawls into the bay.

The little-visited city park at the top of this hilltop in southeast San Francisco near Candlestick Park offers dramatic views of the bay and city. It is also a refuge for some of the largest and richest native grasslands in San Francisco. Fields of goldfields (Lasthenia californica), California buttercup (Ranunculus californicus), checkerbloom (Sidalcea malvaeflora), native bunchgrasses and many other wildflowers dazzle the visitor during mid-spring. Rare plants such as the San Francisco Chinese houses (Collinsia multicolor) and the coast larkspur (Delphinium californicum) are found nowhere else in San Francisco.

Towards the top of the hill the grasslands are replaced by eucalyptus plantations and, remarkably, a remnant shrub woodland with coast live oaks (Quercus agrifolia) and islay cherry (Prunus ilicifolia). (Islay is one of the names for this plant in the local Ohlone language; Islais Creek is San Francisco's only place name derived from the Ohlone language.) Outcrops of the underlying Franciscan radiolarian chert appear throughout the woodland and grassland. In the 1930s work crews from the New Deal WPA built several retaining walls and steps using local chert blocks. In a modern update of this WPA activity, staff and volunteers from the city's Natural Areas Program remove invasive weeds like fennel and french broom from the hill. They work closely with crews of local residents employed by the San Francisco League of Urban Gardeners and other community development organizations. 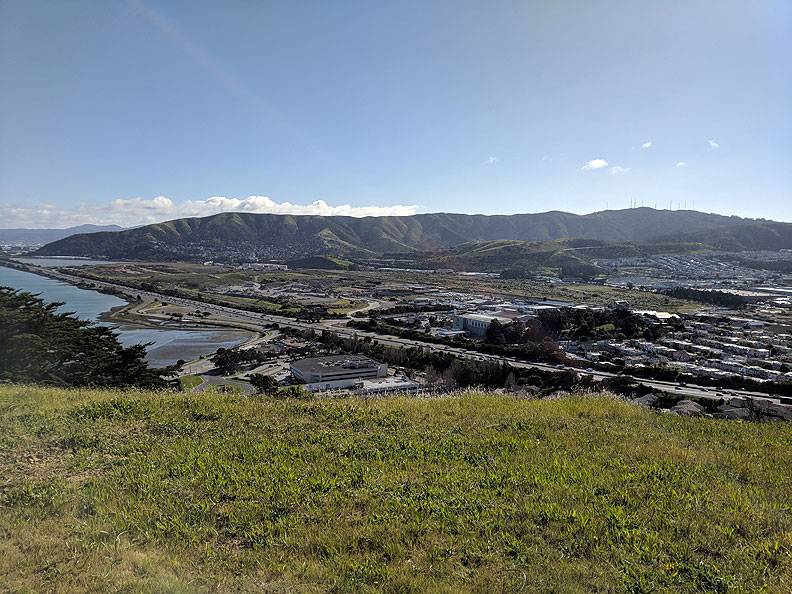 March 2018 view south from Bayview Hill towards San Bruno Mountain in distance, with the former landfill site for San Francisco's garbage in the foreground, west of Highway 101.

In the late 1890s George Randolph Hearst and his Bay View Land Company sought to build luxury homes on the hill, but the plan floundered because of its distance from downtown. In 1902 the city purchased the hilltop with plans to build a quarantine facility. Charles Crocker, who feared that his extensive holdings in nearby Visitation Valley and San Bruno Mountain would lose value if such a facility was built, donated his lands on Bayview to the city with the condition that it abort its plans. It became dedicated park land in 1915.

It wasn't long before Bayview Hill suffered the indignity of urbanization. Nearly fifty years ago its eastern slopes, once much more extensive (visible in the 1920s photo above), were leveled and dumped into the bay to create Candlestick Park. Quarrying along its southern slope destroyed one of San Francisco's largest prehistoric archeological resources, a midden known as Bayshore Mound.

Access to the city-owned property at the top is by foot or bicycle only. Park at the end of Key Avenue on its northwest slopes.

Silent video of a bike ride around the top of Bayview Hill, April 2020. 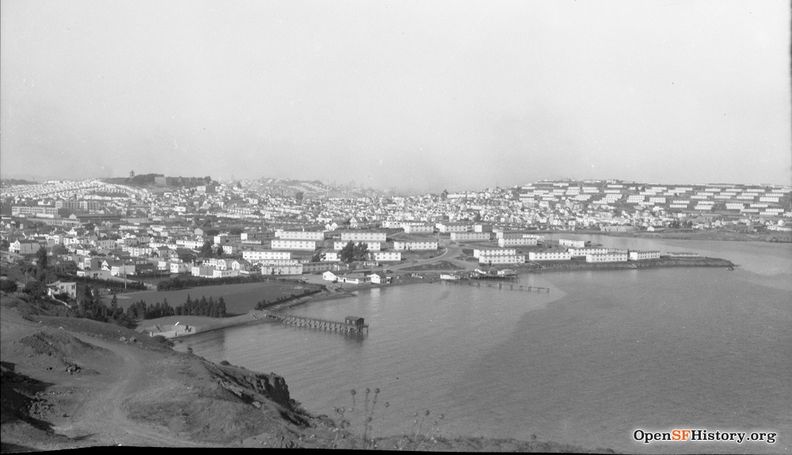 Bayview Hill, 1949 view to the northeast. This is before carving and landfilling for Candlestick Park began, but after the 1930s construction of Gilman Playground which is in the left foreground, along with Hunters Point housing and the Yosemite Slough channel. 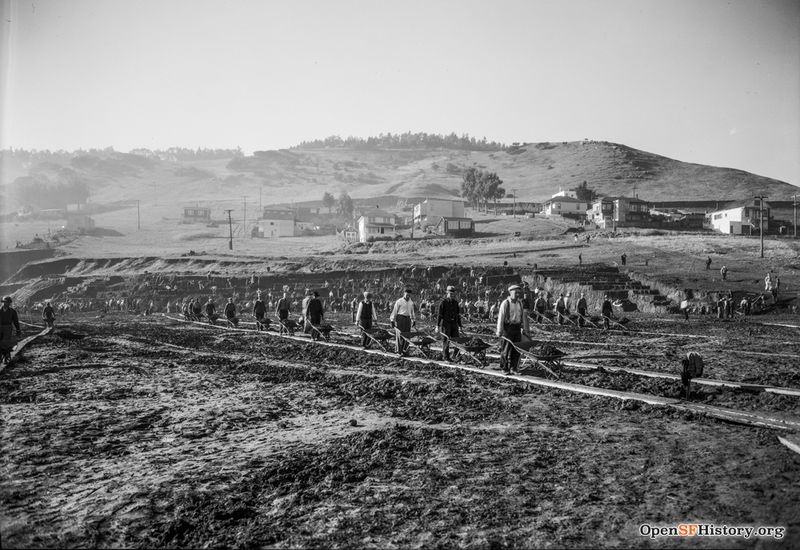 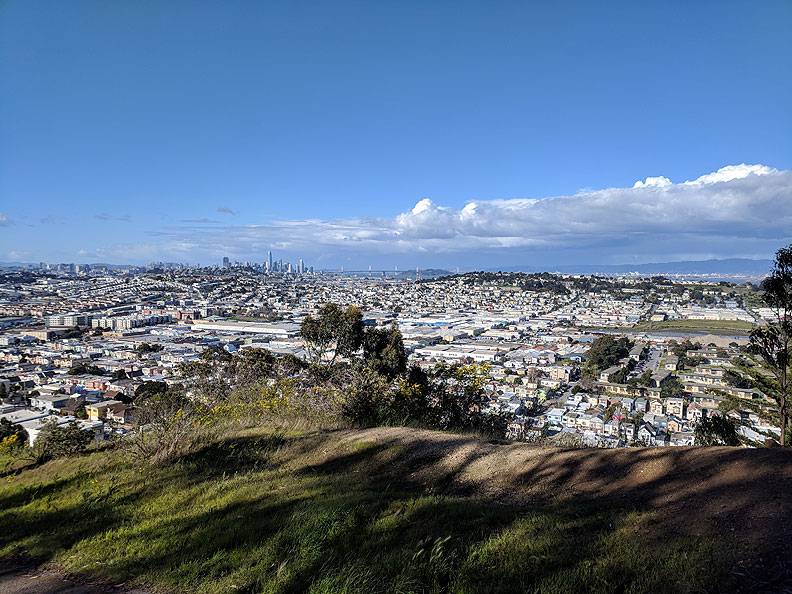