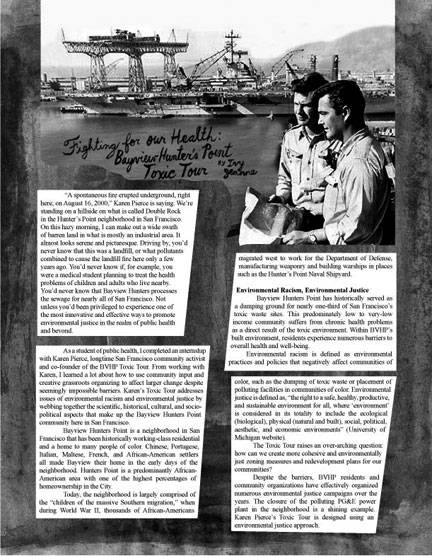 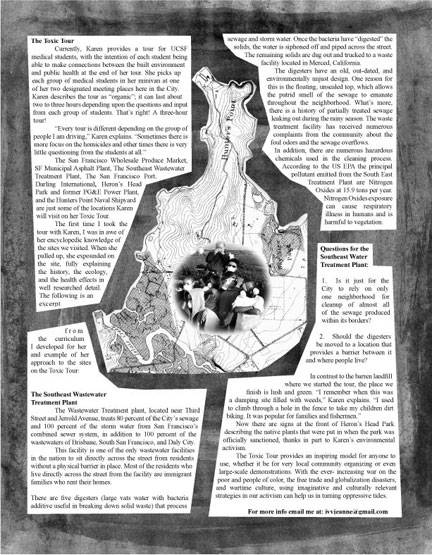 Fighting for our Health

“A spontaneous fire erupted underground, right here, on August 16, 2000,” Karen Pierce is saying. We’re standing on a hillside on what is called Double Rock in the Bayview/Hunter’s Point (BVHP) neighborhood in San Francisco. On this hazy morning, I can make out a wide swath of barren land in what is mostly an industrial area. It almost looks serene and picturesque. Driving by, you’d never know that this was a landfill, or what pollutants combined to cause the landfill fire here only a few years ago. You’d never know if, for example, you were a medical student planning to treat the health problems of children and adults who live nearby. You’d never know that Bayview/Hunter's Point processes the sewage for nearly all of San Francisco. Not unless you’d been privileged to experience one of the most innovative and effective ways to promote environmental justice in the realm of public health and beyond.

As a student of public health, I completed an internship with Karen Pierce, longtime San Francisco community activist and co-founder of the BVHP Toxic Tour. From working with Karen, I learned a lot about how to use community input and creative grassroots organizing to affect larger change despite seemingly impossible barriers. Karen’s Toxic Tour addresses issues of environmental racism and environmental justice by webbing together the scientific, historical, cultural, and sociopolitical aspects that make up the Bayview/Hunter's Point community here in San Francisco.

Bayview/Hunter's Point is a neighborhood in San Francisco that has been historically working-class residential and a home to many people of color. Chinese, Portugese, Italian, Maltese, French, and African-American settlers all made Bayview their home in the early days of the neighborhood. Hunters Point is a predominantly African-American area with one of the highest percentages of homeownership in the City.

Today, the neighborhood is largely comprised of the “children of the massive Southern migration,” when during World War II, thousands of African-Americans migrated west to work for the Department of Defense, manufacturing weaponry and building warships in places such as the Hunter’s Point Naval Shipyard.

The BVHP Toxic Tour raises an over-arching question: how can we create more cohesive and environmentally just zoning measures and redevelopment plans for our communities?

Despite the barriers, BVHP residents and community organizations have effectively organized numerous environmental justice campaigns over the years. The closure of the polluting PG&E power plant in the neighborhood is a shining example. Karen Pierce’s Toxic Tour is designed using an environmental justice approach.

Currently, Karen provides a tour for UCSF medical students, with the intention of each student being able to make connections between the built environment and public health at the end of her tour. She picks up each group of medical students in her minivan at one of her two designated meeting places here in the City. Karen describes the tour as "organic", it can last about two to three hours depending on the questions and input from each group of students. That's right! A three-hour tour!

"Every tour is different depending on the group of people I am driving," Karen explains. "Sometimes there is more focus on the homicides and other times there is very little questioning from the students at all."

The first time I took the tour with Karen, I was in awe of her encyclopedic knowledge of the sites we visited. When she pulled up, she expounded on the site, fully explaining the history, the ecology, and the health effects in well researched detail. The following is an excerpt from the curriculum I developed for her and example of her approach to the sites on the BVHP Toxic Tour:

There are five digesters (large vats water with bacteria additive useful in breaking down solid waste) that process sewage and storm water. Once the bacteria have “digested” the solids, the water is siphoned off and piped across the street. The remaining solids are dug out and trucked to a waste facility located in Merced, California.

The digesters have an old, out-dated, and environmentally unjust design. One reason for this is the floating, unsealed top, which allows the putrid smell of the sewage to emanate throughout the neighborhood. What's more, there is a history of partially treated sewage leaking out during the rainy season. The waste treatment facility has received numerous complaints from the community about the foul odors and the sewage overflows.

In addition, there are numerous hazardous chemicals used in the cleaning process. According to the US EPA the principal pollutant emitted from the South East Treatment Plant are Nitrogen Oxides at 15.9 tons per year. Nitrogen Oxides exposure can cause respiratory illness in humans and is harmful to vegetation.

1. Is it just for the City to rely on only one neighborhood for cleanup of almost all of the sewage produced within its borders?

2. Should the digesters be moved to a location that provides a barrier between it and where people live?

In contrast to the barren landfill where we started the tour, the place we finish is lush and green. “I remember when this was a dumping site filled with weeds,” Karen explains. “I used to climb through a hole in the fence to take my children dirt biking. It was popular for families and fishermen.”

Now there are signs at the front of Heron’s Head Park describing the native plants that were put in when the park was officially sanctioned, thanks in part to Karen’s environmental activism.

The BVHP Toxic Tour provides an inspiring model for anyone to use, whether it be for very local community organizing or even large-scale demonstrations. With the ever-increasing war on the poor and people of color, the free trade and globalization disasters, and wartime culture, using imaginative and culturally relevant strategies in our activism can help us in turning oppressive tides.