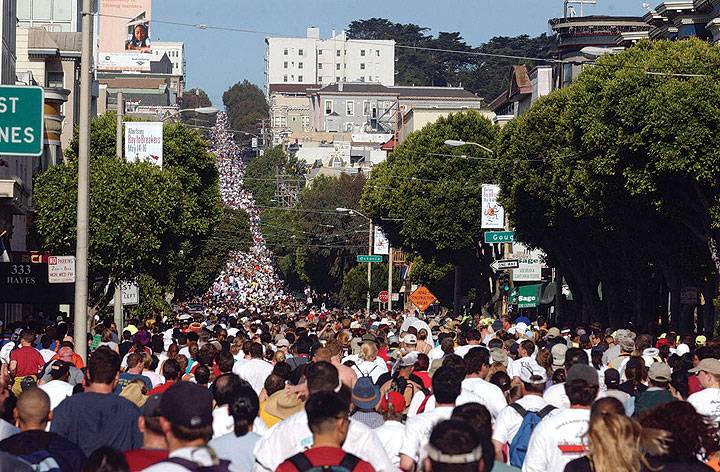 Runners on Hayes facing the infamous Hayes Street hill climb in the 2011 Bay to Breakers.

In 1912, the city was in need of a bit of public relations to show the world the town was back from the horrific earthquake and fire of 1906 that left 250,000 people homeless in a city of about 400,000. The city fathers thought a well-publicized foot race would do the trick, one they called the Cross City Race. The race is still around but it’s now dubbed Bay to Breakers. Perhaps coincidentally, the course for the first event coincided with the route earthquake and fire refugees had trekked as they walked up Hayes Street to Alamo Square (just before the race’s 3-mile marker) to the central first-aid station and on to what was the location of the tent cities in Golden Gate Park. That’s still the route of today’s race.

For many years, participation in the event remained low and low key. Until the early 1960s there were no more than 130 men—supplemented by a few disguised women, who had managed to infiltrate this guys-only ritual. (In 1971, the race was opened to all.) In 1964, someone with an ear for alliteration renamed the Cross City Race the Bay to Breakers and the festivities began to loosen up considerably. Folks began to slow down and costume up. Here’s a small portion of what one observer reported seeing in 1982: a guy dressed as a dog dish; another decked out as a San Francisco fern bar complete with empty glasses, crumpled name tags, and used ashtrays; a man in pajamas and a woman in a baby-doll nightgown with a sign on her back reading, “I got up late;” another woman in a t-shirt that read, “I’d rather be having multiple orgasms.” And that was in the days when things were relatively sane. 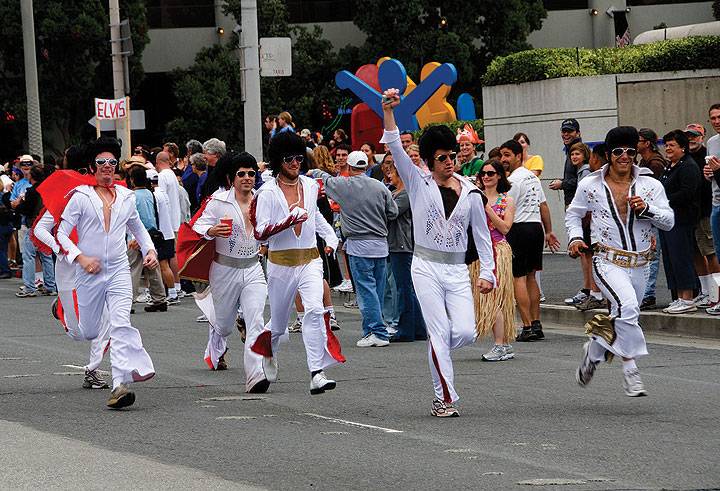 Elvis contingent, not particularly weird at Bay to Breakers.

Do not, however, think this what-the-hell playfulness of many has made the race less serious for others. In addition to real runners from all around the world, the race also features the celebrated centipede teams—competing groups of a minimum of 13 runners tethered together. They may be costumed as a string of DNA molecules or a linear accelerator, but they can be dead on serious, often practicing for months before the competition.

Like other San Francisco events, Bay to Breakers has its subcultures of participants. One which needs no explanation is the group Bare to Breakers. The group’s motivating mantra might serve as watchword for many race participants: “There is a time when people reach a point in their lives when they just say, ‘Why not?’” 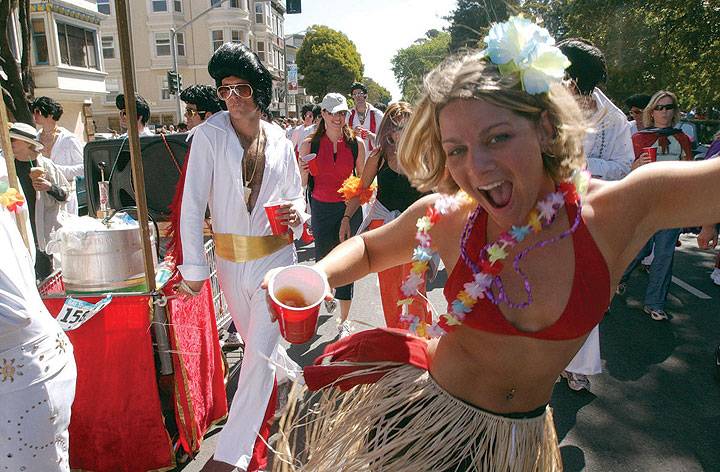 Excerpted with permission from Art Peterson's book, "Why Is That Bridge Orange?" published in 2013, by Inquiring Minds Productions.
Retrieved from "http://foundsf.org/index.php?title=Bay_to_Breakers&oldid=21242"
Share this page: