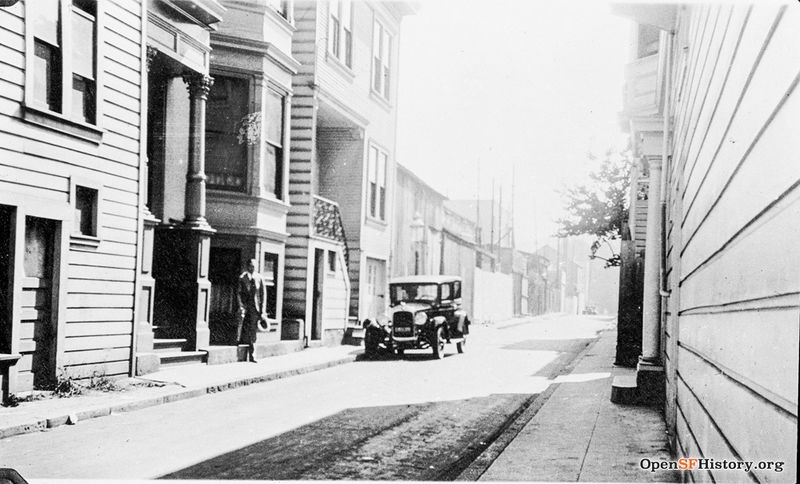 View south on Balmy Alley from 24th Street around 1930, long before the murals started getting painted in the 1970s. 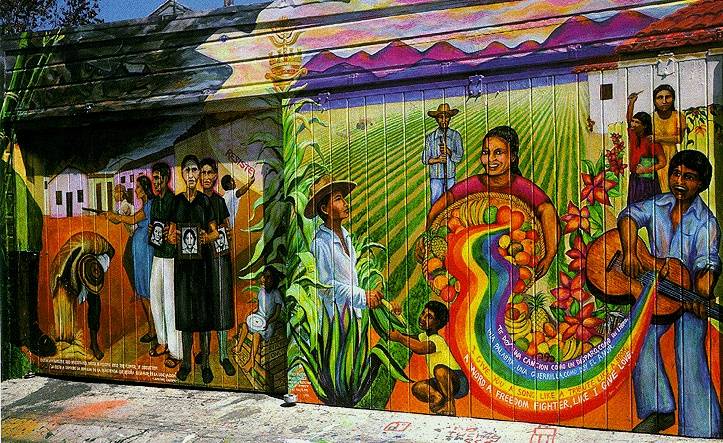 The Mission District may be ethnically mixed, but the Inner Mission (roughly the area from Potrero on the east to Dolores Street on the west, and Chavez Street on the south to 20th or 21st Street on the north) is dominated by Latino culture. Not exclusively Chicano (i.e. Mexican American), the population of the Mission District is a mixture of Central Americans (primarily from El Salvador, Nicaragua and Guatemala), Mexicans and South Americans, with a smattering of other groups. The main streets are Mission and 24th Streets, which feature taquerias, Mexican bakeries, stores and restaurants offering cuisine from several Latin American countries. A mural painted in 1974 by the Mujeres Muralistas, for example (Latinoamerica), includes imagistic references to four or five different Latin American cultures within a single, unified design. The area has a history of political activism as well, from the Mission Rebels Organization in the late 1960s, to Los Siete de la Raza (a famous legal case in which seven young Latinos were accused of murder), to numerous local agencies such as the Mission Coalition Organization and El Tecolote newspaper. 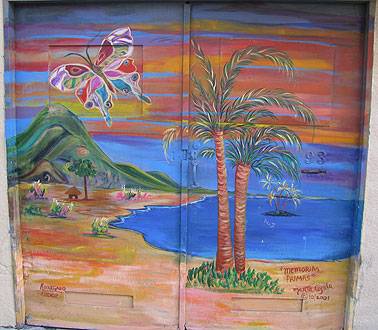 Balmy Alley (formally Balmy Street) is a one-block alley between 24th and 25th Streets, just a few blocks from the prominent mural, Las Lechugueras. It had been the site of murals since 1972 when two women who called themselves Mujeres Muralistas (the women muralists), painted their first team mural. A few murals were added sporadically thereafter until 1984, when Ray Patlan brought some three dozen mural activists together and proposed a joint project in which each garage door or fence segment facing the alley would display a mural. They would be linked by dual theme: celebration of indigenous Central American cultures, and protest of U.S. intervention in Central America. The organizational rubric for Balmy was Placa, which in Spanish refers to the tag, or plaque or mark made by taggers. 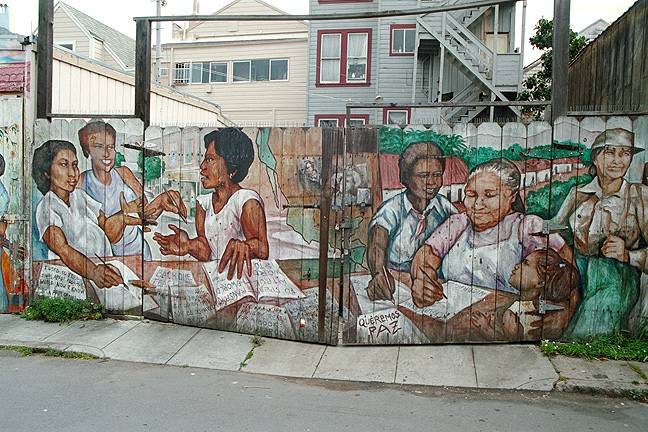 Jane Norling’s Darles Armas y Tambien Ensenarles a Leer (“Give them arms, but also teach them to read”), a celebration of the literacy campaign that had been undertaken by the Sandinista government in Nicaragua. 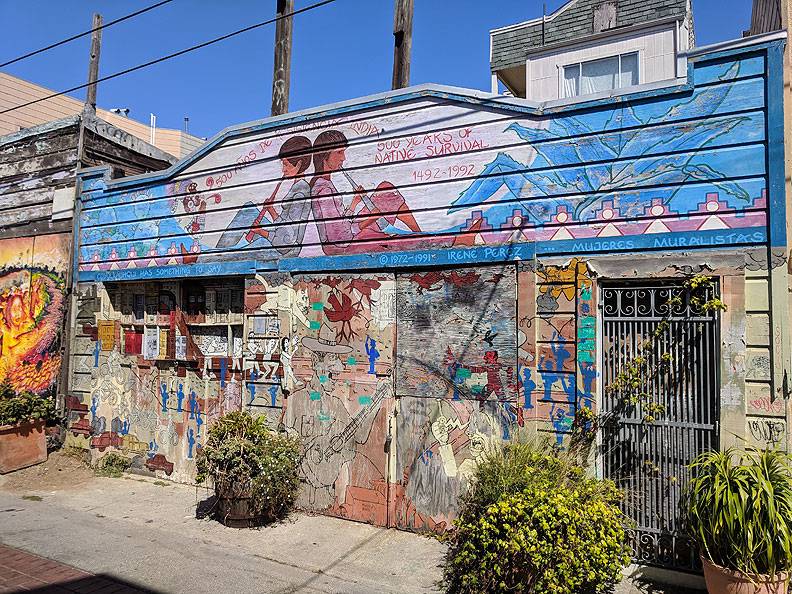 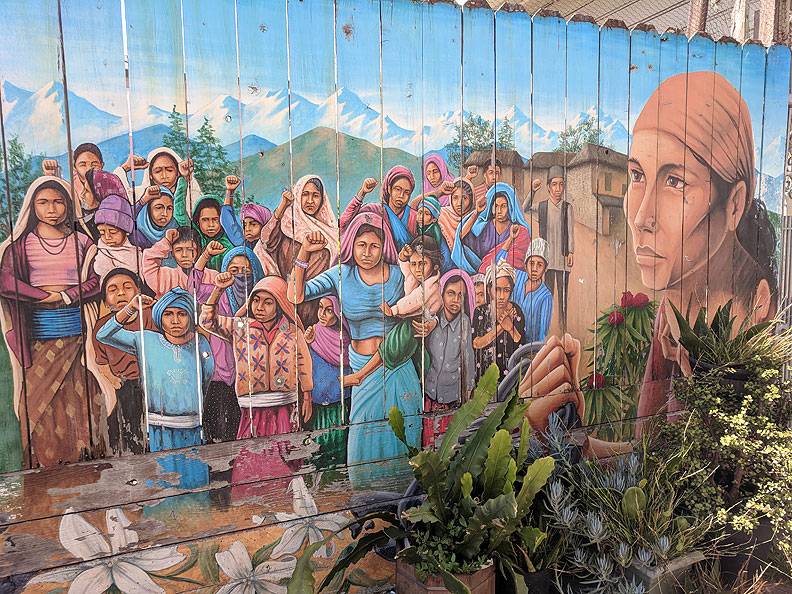 The residents and owners whose property backed onto Balmy were mostly Latino, and while some were initially skeptical about giving permission for murals on their property, nearly all embraced the project once it began. In the summer of 1985, 27 murals were painted, and a large dedication celebration was held in September of that year. The project was funded (at $2,500!) by a single grant from the Zellerbach Foundation, and a generous provision of paints by the local distributor of Politec Mural Paints. Balmy became a highly influential project, leading to the La Lucha Continua Art Park in New York City the following year, and received more publicity than any other community mural in San Francisco's history. 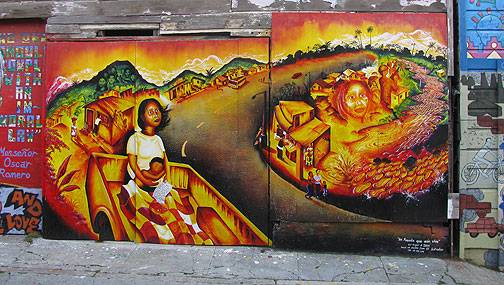 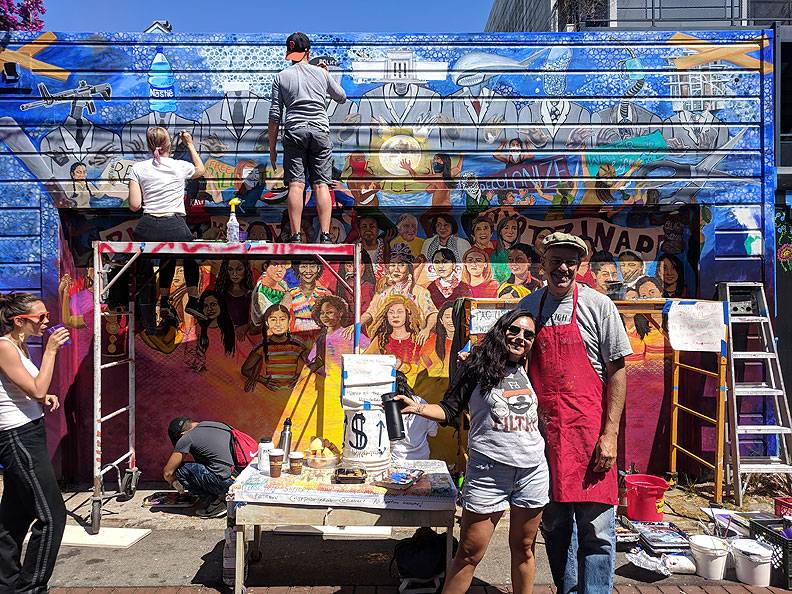 Lucia Ippolito and Art Hazelwood take a break in front of their new mural in Balmy Alley, while crew continues painting, August 2018.

A key element in Balmy's impact lay in its presence as a mural cluster, i.e., a group of murals painted in a single location, thereby forming a presence that any single piece could not command. There had been other clusters, such as Estrada Courts in Los Angeles, and the Minipark a few blocks down 24th Street in S.F., but in these cases the murals were honored by their surroundings, whereas Balmy itself was elevated by having murals painted in it. 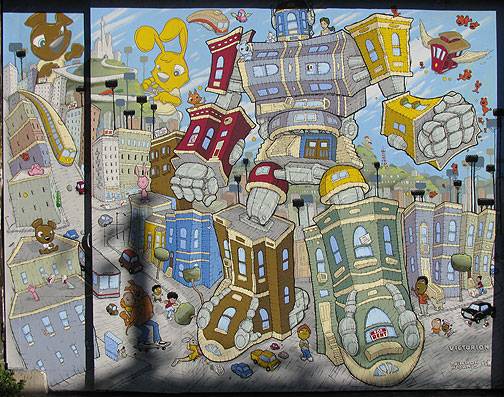 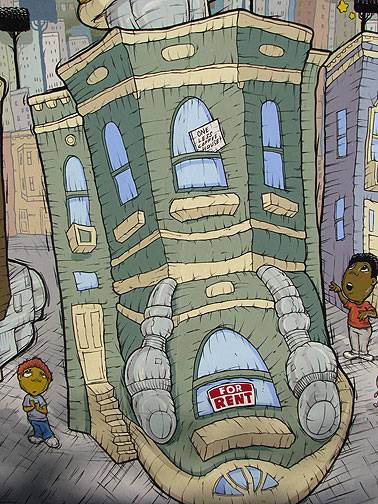 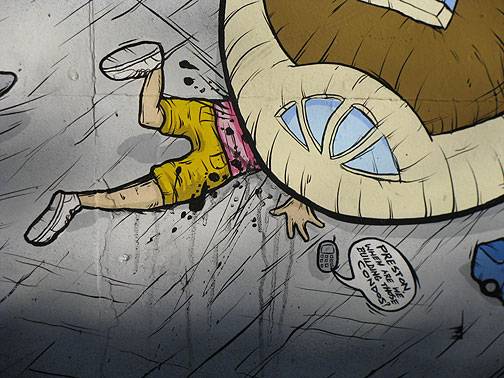 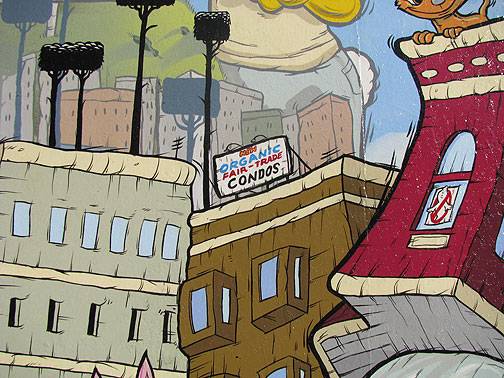 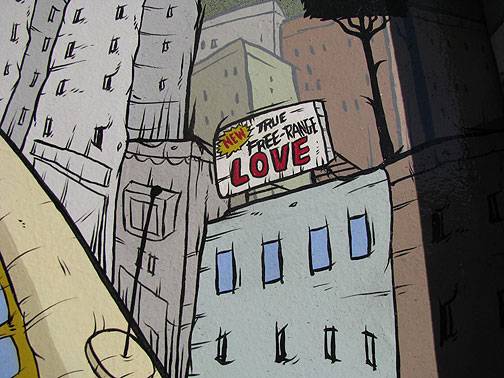