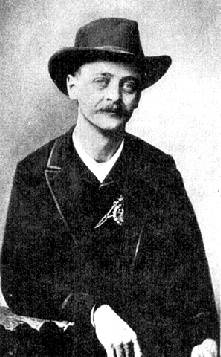 Recording of notes scribbled in margins of Haskell's notebooks in 1880s.

Burnette Haskell was the founder of the local version of Karl Marx's First International. Born June 11, 1857 in the Sierra foothills, he went to several universities, graduating from none, passed the California bar in 1879 but quickly came to detest the law. Haskell's wealthy and ambitious uncle gave him editorial control of his newspaper Truth. Weeks later Haskell offered the paper to the Federated Trades Council as house organ, which they accepted. Haskell continued on as editor, and became a prominent local radical, passing through incarnations as a socialist, communist-anarchist, and finally an Edward Bellamy-inspired cooperativist.

The San Francisco branch of the International Workingmen's Association was organized in a classic cell-form, based on successive hierarchies of groups of nine people, each holding a distinctive membership card. And though it intended to be a clone of Marx's group in England, it actually took positions more akin to the Black International (anarchist) associated with Bakunin. "Truth is five cents a copy, and dynamite forty cents a pound... When the laboring men understand that heaven, which they are promised hereafter, is a mirage, they will knock at the door of the wealthy robber with a musket in hand, and demand their share of the goods of this life now," editorialized Truth in late 1883.

Haskell's handwritten notes in old membership books indicate his plans: "Seize Mint, Armories, Sub-Treasury, Custom House, Government Steamer, Alcatraz, Presidio, newspapers." He told historian Ira Cross of manufacturing bombs, hiding suitcases with bombs, using bombs in labor troubles, and of plans to blow up the county Hall of Records so that radicals could seize the choice real estate in the city for themselves. After peaking in popularity in 1886, Haskell's IWA collapsed soon after, partly because the depression of 1883-85 ended, and partly because Haskell and other activists left to form the Kaweah Cooperative Commonwealth, a utopian experiment, in California's Central Valley (which in turn failed by 1891). Many later leaders cut their teeth in the labor movement of the mid-1880s. 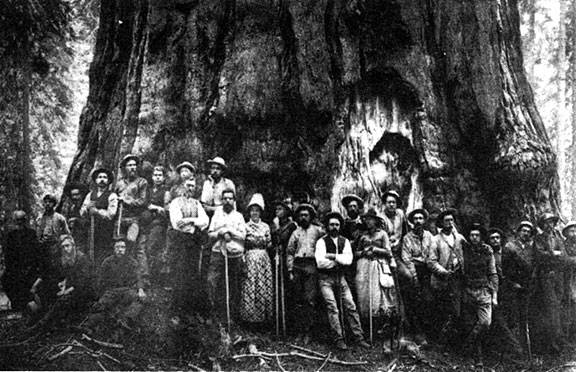 The members of the Kaweah Cooperative Commonwealth pose in front of the massive tree they named the "Karl Marx" tree around 1889. Today the same tree is a centerpiece of the national King's Canyon Park and is called the "General Sherman tree".

Co-Operative Dreams: A History of the Kaweah Colony by Jay O'Connell

A History of the Labor Movement in California by Ira Cross