--from a pamphlet by the SF Bike Messengers Association, 1996 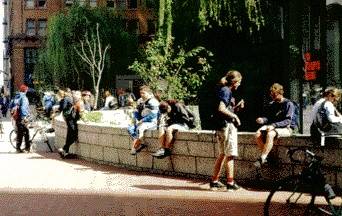 I guess we should start with the first San Francisco messenger killed, back in 1888. His name was little Johnny Hancock, and he had been employed as a walker for 2 months. It seems that this young orphan had been enjoying himself in the brothels and opium dens of the Barbary Coast, when he leaped off a cable car at Jackson and Kearny and got run over by another cable car. He died two days later, after leg amputation. No blame was attached to the driver.

Bicycle messengering officially started in 1894, when a railway strike halted mail delivery for the Bay Area. An ingenious bicycle shop owner in Fresno came up with the idea to deliver it by bicycle. He set up a relay between Fresno and S.F., with 6 riders covering about 30 miles each. The last rider would cover 60 miles. It was a complete success, and our job was set in motion. Between the mail route, and the bicycle craze at the turn of the century, companies started to employ bike messengers. Western Union was one of the first, using bikes to deliver telegraphs to anxious clients. Other local businesses started to catch on to the idea that a bike was an extremely efficient way to get products to their customers. In 1945, the first all-bicycle delivery service was founded by Carl Sparks. Sparkies went on to become Aero, which still exists today. When the sixties came along, so did a new breed of messengers. Instead of caps and bow-ties, jeans and T-shirts became the uniform. Bike messengering became the starving artists' way of employment, and the number of companies soon reached over 10.

In the mid seventies, Punk Rock hit S.F., and messengering allowed people with mohawks to earn a living. Many semi-famous messenger bands ensue. In 1979, over 10 years before the first CMWC, the Bike Messenger Olympics is held downtown. Several tests of skill are performed, including the pedestrian slalom, the wheelie test, and the briefcase pass. The early eighties bring the Gravy Days, bike messengers can be loud, rude, and reeking of alcohol, yet still make a decent wage. To celebrate this, The Farm is opened up for messenger shows, complete with bands, art, light shows, etc. The first Road Rash Bash is held to benefit The Farm. In 1984, Gold Mountain Courier is created to help refugees on public assistance hold a job and learn the streets. And then right after the FAX machine is invented, a major earthquake hits S.F., completely messin with the economy. Clients cut back on deliveries, as well as pay. One speeds with baskets make way for mountain bikes, enabling messengers to get around quicker. Messenger companies start to fold, and the publics opinion of bike messengers reaches an all-time low. One Police officer even proposes to require every bike messenger to wear a identification sign on their shirt, visible from no less than 10 feet away.

Messenger activism, however, starts to grow and grow. BAAR is created to aid Afghan amputees, Critical Mass gets its start with the help of the SFBMA, the AIDS ride uses bike messengers in a fashion show to promote their ride, the HANX and the Jaks start gathering toys for needy kids at Christmas time, the Russian River Ride becomes an annual Mecca for the SFBMA, the Small Messenger Company Picnic unifies the little fish, and zines of every form interest the eyes of many a stand by victim. In 1993, word of the CMWC gets through the international grapevine, just as the Road Rash Bash gets resurrected in Denver. L Sid headlines the CMWC 93 World Welcome Party, while back home, road bike racers start to infiltrate the workforce. CMWC 94 brings an even larger S.F. contingent, culminating in London's first Critical Mass on a memorial ride after the final race.

In S.F., many small companies start to shack up together, in order to compete economically with the larger companies. Taking it one step further, a bunch of independents share tags in order to compete economically with the small and large companies, and learn that after some hard work, they can get back to the gravy days. CMWC 95 gets S.F.'s largest contingent yet, over 30 people, and their enthusiasm convinces everyone to hold CMWC 96 in San Francisco. The SFBMA, as well as the local bicycle community show their support, and show up for benefit after benefit for CMWC 96, enabling the planning committee to actually pull it off. And here you are now, at the culmination of over 100 years of bicycle messengering in San Francisco. Hopefully the future will bring a decent wage, health benefits, sick pay, equipment compensation, retirement plans; stuff that any other life threatening job offers without question. 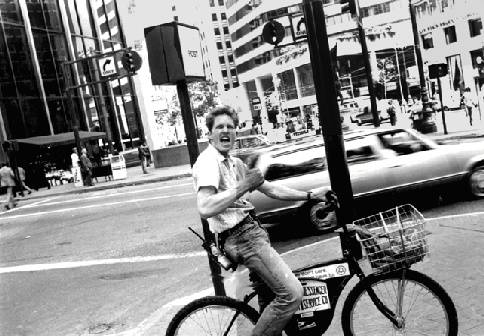