BART to SFO, Caltrain to Downtown: How One Happened and the Other Didn’t

In June of 2003, Bay Area Rapid Transit (BART) opened a new rail line extending from its old southern terminus in Colma to a station at San Francisco International Airport (SFO). The following year, the American Public Transportation Association named BART the #1 Transit System in America providing over 30 million passenger trips per year. (BART Timeline, 2014) This honor would surprise the average San Francisco resident today, by contrast, whose complaints about BART and about San Francisco’s public transit system as a whole are frequent. South Peninsula travelers not within walking distance of the Caltrain, for example, can’t get to SFO for under $30 without riding four separate vessels: a ride to a Caltrain station, the Caltrain, BART, and Airtrain to their terminal. A personal taxi from Palo Alto, for comparison, is typically $45 to $50, each way. Why is the system like this?

It is easy to take our transportation infrastructure for granted. You ride the same train to work every day, hardly giving a thought to how that train got there. Why weren’t the tracks made one street over? Why is the station three blocks away from work instead of two? When will the system change again? Why doesn’t the Caltrain go all the way downtown?

Questions like these were probably all addressed during the planning process. The trains that zip around, over and beneath our cities to make millions of commutes possible are the end result of years of designing, lobbying and spending. On the San Francisco Peninsula, everybody has his or her own idealistic image of what the system should look like, and none of those ideal images are the reality. One event played a key role in shaping the Peninsula’s rail system: the BART extension to the airport, a story which starts in the 80s and whose ramifications will extend well into the 21st century. After ten years of political squabbling between federal and state officials, airline representatives, and the boards of BART, Caltrain and the Metropolitan Transportation Commission (MTC), construction began for a transit service that San Franciscans now dislike and that requires yet another expensive upgrade. (Baldassari, 2017)

When San Mateo County voters decided to raise the county’s sales tax by half a cent on election day in 1988 to fund transportation improvements (Demorro, 10 Nov. 1988), they weren’t even sure what project the money would go towards. Transportation projects have to lobby for funding from both the state and federal governments in each fiscal year. Two parties in the Bay Area were lobbying for DoT money in the 80s, BART and Caltrain. Caltrain wanted to extend their tracks from its northern terminus at 4th and King Streets to the Transbay Terminal at 1st and Mission, while BART wanted to extend theirs from Colma to SFO and Millbrae. Proponents from both sides argued that theirs was the more efficient option, from both an economics standpoint and a transportation one. Caltrain argued that through putting passengers nearer to the financial district, their 1.4-mile extension would triple daily ridership. BART argued that their 8.2-mile one would service a projected 50,000 passengers daily to the airport and serve as the commute of choice for northern Peninsula residents. Either improvement would help to loosen the worsening gridlock on U.S. Route 101. (Demoro, Jun. 9 1988)

Completion of both projects would raise San Francisco’s transportation system to a level comparable to that of major European cities. (Demoro, Jun. 9 1988) State and Federal government could not fund both at the same time because having both projects under construction simultaneously would be inefficient. They would not provide the funds they pledged until local governments ensure those funds would be matched. The 1988 sales tax vote, along with toll bridge increases, did just that. (Demoro, Nov. 10, 1988) Even though Caltrain seemed to have stronger support from both officials and transportation experts, BART ultimately received funding first, and therefore finished first. Mysterious is the manner in which favor shifted from Caltrain to BART.

Former California State Senator Quentin Kopp (held office 1986-1998), whose legacy includes helping the BART extension come to reality during his term, publicly and firmly voiced his support of Caltrain’s vision in a 1987 article in the San Francisco Chronicle. He also bashed BART’s plan. “I unequivocally predict that should [BART’s extension] ever be effectuated, it will be a debilitating money loser and a system which produces little usage by airline passengers or airport employees,” he wrote in the article, titled Extending Caltrain is Top Priority. (Kopp, 1987) In 1992, both extensions appeared as measures on the ballot in San Mateo, and while the measures weren’t supposed to be pitted against each other, officials were backing one or the other, because everyone knew that it had to be one or the other. (Workman, 7 Oct. 1992) Neither measure included a cost analysis. Both measures passed, but Caltrain received more votes. (Yates, 22 Jun. 2005) Election statistics could not be found. 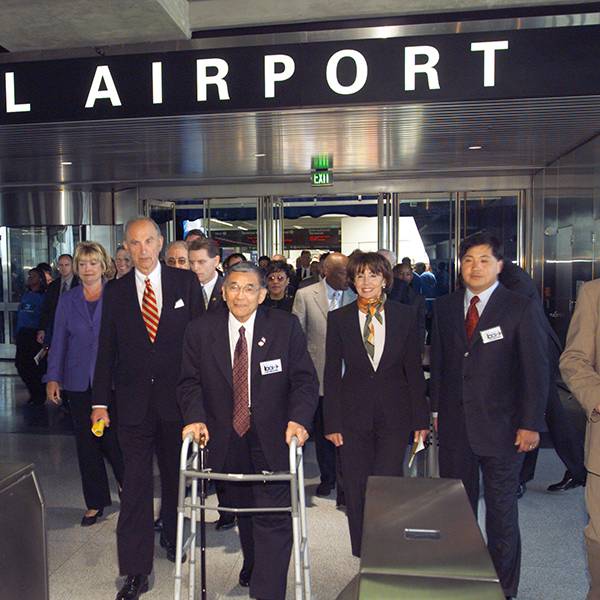 Quentin Kopp, left of the man with the walker.

His criticism of the BART project in 1987 was twofold; it was too early in the development phase to be a timely solution to the Peninsula’s gridlock problem, and the station wouldn’t even be at the airport. “It would be to a wasteland west of the Bayshore and approximately a mile and one half from the airline terminals,” he wrote. Kopp’s chief contribution to the BART extension was starting a grassroots effort to get Measure I on San Francisco ballots in 1994. (Cabanatuan, 21 Jun. 2003) The measure advocated for a station next to the international terminal, where it is today, instead of in this “wasteland.” SFO and its airlines did not want the station to occupy airport property and demanded that BART pay a hefty rent equivalent to $4m per year. (Cabanatuan, 21 Jun. 2003). BART and the airlines reached an agreement, with the help of Kopp. Literature on Kopp’s stance, between the time of his scathing review of BART and when he helped push the project through in 1994, is scarce.

The tone of Kopp’s argument does not suggest that he would have been willing to change sides even if the location of the station were better. But as the history says, he did switch, with emphasis. Convincing the airlines to agree to the project was the final key to gaining a $750 million promise from the White House, which would get paid out in annual amounts earned through lobbying with the Department of Transportation. Kopp, in his pro-Caltrain anti-BART statement, insisted the project would take 20 to 30 years after 1987 to complete, because it had too many financial and political hoops to jump through. (Kopp, 1987) Kopp switched sides and helped the project through those hoops. It took 16 years. Bechtel Corporation, who built all of BART’s rails, built this one too, and continues to receive contracts for multimillion dollar extensions.

The extension’s actual ridership fell short of its original prediction of 50,000 weekly, servicing about 35,000 in its first week. (Yates, 22 Jun. 2005) In the first month, reports claim the parking lots and platforms at the newly opened stations were surprisingly uncrowded. (Cabanatuan , Walsh, 24 Jun. 2003) Because ridership was lackluster, San Mateo County was paying its own tax dollars to offset the losses from low ticket sales. (Matier, 9 Jul. 2003) Two years after BART-to-SFO’s opening, the San Mateo Daily Journal published an article titled, Was BART worth the Cost? Rather than ask the question, Dana Yates, the writer, simply answers: it wasn’t. Having a station outside the airport property and extending SFO’s own light rail system out to the Caltrain, said Richard Silver, director of the Rail Passengers Association of California, would have made the operation more cost-effective. (Yates, 22 Jun. 2005)

Today we are left with a BART system fraught with delays, and growing more obsolete day by day; populations continue to grow and BART’s cars are overcrowded. (Terplan and Warburg, 12 Dec. 2014) To catch up to growing populations and the rapidly changing energy market, another investment upwards of several hundred million dollars is on the horizon.

BART forms a triangle, with one leg running along the Caltrain right of way, parallel to Route 101, connecting San Bruno and Millbrae, and the other two connecting San Bruno and Millbrae each to the SFO station. SFO has its own people-mover, called AirTrain, to ferry people from the BART station to the terminals. The baffling part about this system is that AirTrain’s track continues past its BART stop to long-term parking, bringing it well over halfway to the Caltrain station at San Bruno. There were 93 different proposals considered at one point or another. (Hoover, 28 Apr. 1995) Why couldn’t AirTrain have extended to the San Bruno Caltrain station according to proposition 3B shown in figure 2? Why make it so difficult for thousands of southern Peninsula travelers to get to the airport? BART continues to praise itself when many Bay Area residents feel they deserve otherwise, with satisfaction ratings hitting a 20-year low in January of 2017. (Cabanatuan, 25 Jan. 2017)

It is an interesting thought experiment, wondering what San Francisco would look like today had Kopp not changed his mind, or if the AirTrain extension option were considered more thoroughly. Would BART-to-SFO still have been constructed before Caltrain-to-downtown?

The Caltrain extension to downtown is under construction now and is not scheduled to be operational anytime soon, with one estimate giving an opening date sometime in 2026. (Barmann, 7 Nov. 2016) Transportation projects can take decades from their time of inception to complete, so a vision for a city such as that which compared San Francisco to the major European cities, can take the better part of a century to make reality. Over that time, the problems these projects address might change. There is no doubt that having public transit to the airport is important, but did San Francisco and Quentin Kopp do it right? Even in 2013, Kopp could still be found “raising hell” against Caltrain’s extension and electrification after changing his stance on a transportation project yet again! (Horgan, 5 Mar. 2013)

Metropolitan Transportation Commission meeting notes from the 80s and 90s. These are located at their library in San Francisco and might provide further insight into the nuanced decision making undertaken with regards to BART and Caltrain.

Countless articles from the San Francisco Chronicle covering transportation in the Bay Area. From the 80s and 90s, these can be found in databases like infoweb.newsbank.com.

Background information on Bechtel Corp., the builders of BART, written before BART-to-SFO began.

A recent story on Bechtel Corp from Forbes.