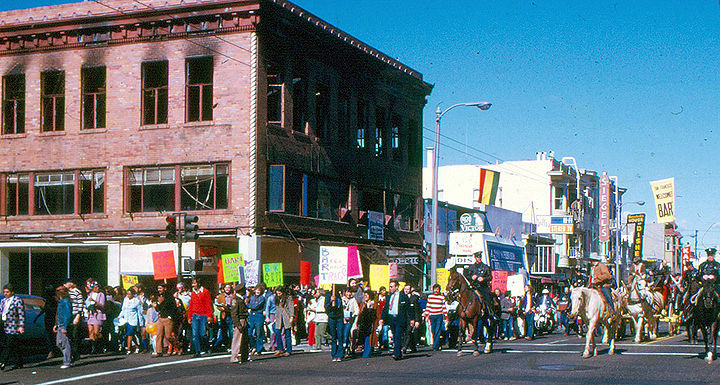 Anti-BART demonstration at 20th and Mission, early 1970s (see burned Granat Bros. building). The anti BART sentiment was channeled by many local radical groups, including the Committee to Support Los Siete de la Raza and the Revolutionary Union. BART was the beginning of the gentrification of the Mission District--its effect has really taken hold since the 2000s.

There are two trends in the life of today's Mission District. One trend is the older traditional role the Mission has played as an area that receives La Raza as they first arrive. The Mission is the first place people of La Raza from the other side settle. Some Raza can find jobs and leave after a while to live in other parts of the city. To city planners the Mission is a "holding area" because it holds people until the people can find work and then afford to move to higher income communities. But La Raza knows the Mission is a "holding area" because it gets you and doesn't let go.

In reality when a Brown person gets more money and moves, it is generally to another part of the Mission or only as far as the Excelsior District which borders on the Mission, and which before La Raza started moving in, contained mostly poor whites.

The other trend is potentially more dangerous to the traditional role of the Mission. Instead of a place for large families to live there has been an increase of higher income single people and of married couples without children. These people have moved in as realtors rebuild and replace two and three story flats with eight and twelve unit apartment houses. These apartments already have taken over Capp and Dolores Street and South Van Ness Avenue. With these apartments a landlord can rent to five or twelve people instead of only the two or three families limit of the older building. Each of these apartments is smaller than the flats and costs more than the flats. Property taxes and land values in the Mission are soaring: renting to more people allows the landlord to pay high costs and taxes as well as allow him to make more money from rents.

The San Francisco Planning Department foresees 13,000 to 14,000 new residences in the next 20 years. Look around. Where will they find space to build 14,000 homes? The only place is on top of the home you are living in now.

The people who live in the flats will not be able to move back because their larger families will not fit into the smaller apartments and because they cannot afford the higher rents that come with wall-to-wall carpets, drapes and sparkle-dust on the ceilings.

The newer trend will be helped by Bay Area Rapid Transit (BART). Land costs are rising all over San Francisco, but in the Mission the rise is higher and faster because two BART stations will soon connect us with downtown San Francisco. 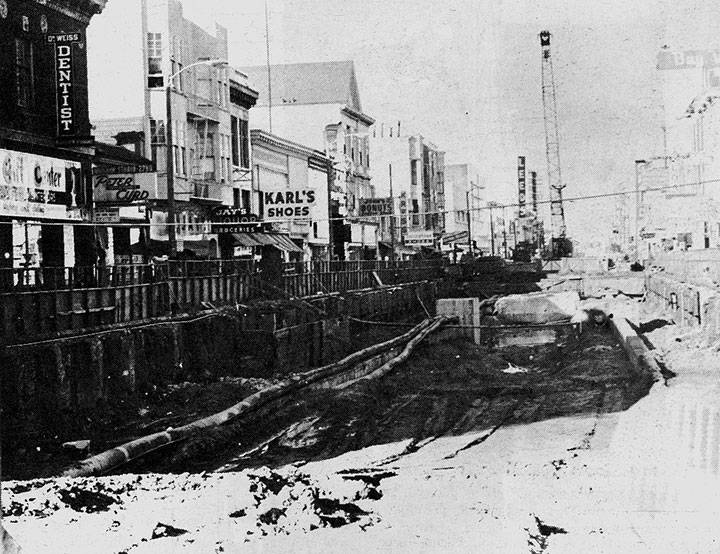 BART construction was done by "trench-and-tunnel" which devastated many of the long-time merchants along Mission Street, who suffered a catastrophic drop in business during the years of construction (a similar pattern occurred along mid-Market).

The city says the prosperity BART brings will pass on to the residents and enable them to remain in the district. But how? Higher land values will also cause the industry located in the Mission along Harrison, Bryant and Potrero streets to move. Industrial plants and factories need room to expand. Land cost in the Mission is too expensive for plants to expand and the city would prefer to see many small apartments and offices instead of a few large factories taking up acreage.

High density can be translated as more people per acre or more people with money to buy from the increased number of stores planned.

Imagine a line up 24th St. from Potrero to Mission. Continue the line down Mission to 16th St., then up 16th to Mission Dolores Church. This line runs through the Mission community, tying it together. The two BART stations will break up this unity. With or without planning by the city the impact of BART will be to cluster activity around the stations on 24th and Mission and 16th and Mission. The new clusters will cut the community in two.

San Francisco's plans call for no business between 18th and 21st Streets along Mission. Instead high density apartments for moderate income people. These apartments will be lower in height than the buildings around the stations to accent that they are between two zones.

Retail sales in the Mission are expected to continue to rise. The 1966 Mission District Urban Design Study predicted an increased demand for office space, 350-550 hotel-motel rooms, 30-40 restaurants and bars and an increase in apparel and general merchandising. Of all the questions to ask in a city sponsored study, why ask about clothes sales? Levi Strauss Company is only three blocks from the 16th and Mission BART station.

What else do the urban designers forecast? They see Mexican palm trees every 26 feet. An "historic" walkway up 16th to Mission Dolores lined with Taco stands and stores that sell genuine made (on Valencia St.) blankets and souvenirs.

Is Senor Taco the type of urban renewal we want? BART will bring tourists from downtown to 16th and Mission in three minutes. Our homes will become hotel rooms and restaurants and serape stores, and Topless Taco Clubs that do not serve Mexicans.

The increased sales will not only come from the tourists but also from the higher income single people and childless couples that will find the Mission more desirable to live in because BART will take them to work quickly and because Blacks, Indians, Chinese, Samoans and La Raza will have been removed by an economic squeeze-out. 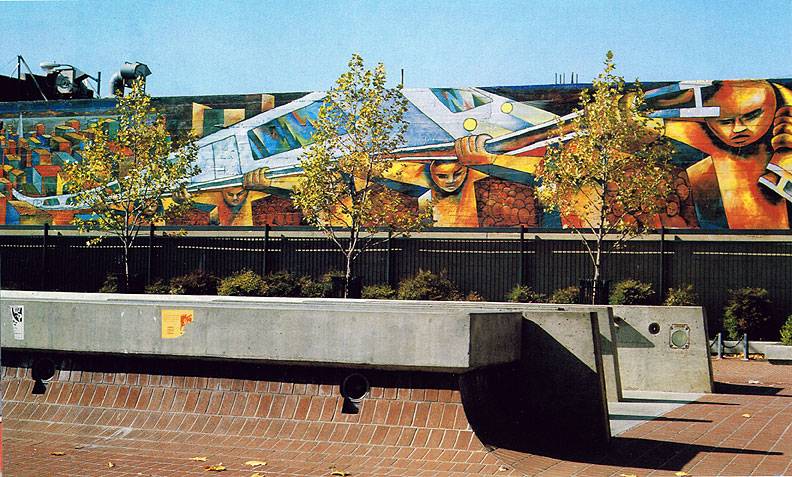 1975 BART Mural in the Mission by Michael Rios, Anthony Machado, and Richard Montez. 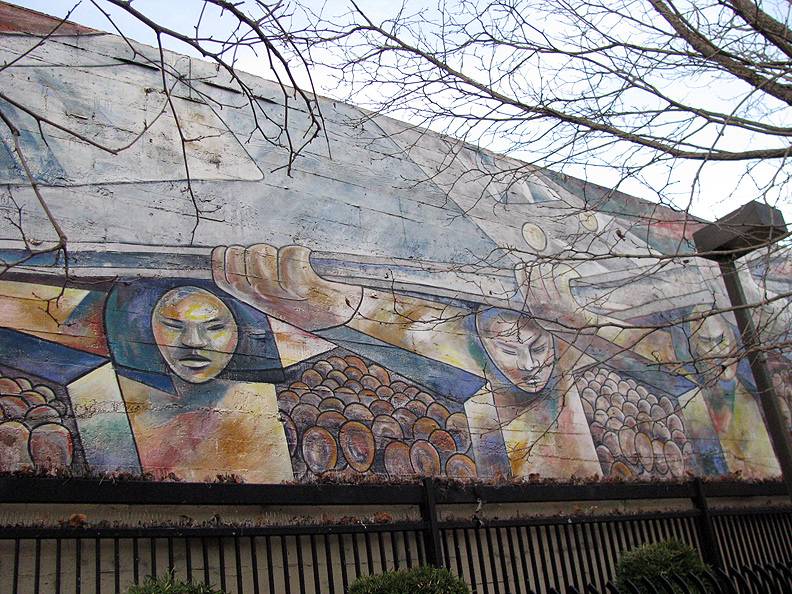 BART, built on the backs of the Latino working class in the Mission. Mural by Michael Rios, Anthony Machado, and Richard Montez, 1975.

In 1962 a Mission Corridor Study was started by the Redevelopment Agency and the Department of City Planning to study the maximum effect of the BART stations on the Mission District. Several groups in the Mission fought back and stopped the study. These groups were afraid that the study results would be used to change the community. The Mission Corridor Study was never finished. But the BART stations were not stopped. The victory was an illusion.

1. A gateway to the Mission on 14th and Duboce.

3. A Mission Street mid-zone between 17th and 23rd Street for moderate income housing.

4. Another entrance way at the Bernal Cut.

5. A palm-lined shopping area along 24th St. from Potrero to the BART station on Mission.

Urban designers who make studies like these look at a neighborhood and say "put a high building there, a tree there, some bricks on the sidewalk...." To urban planners there are no people. One urban designer said that studies "fill a vacuum." A vacuum is space with nothing inside. Our community is not a vacuum. The Mission is a community with people and energy. It is an area filled with different people coming together. The Mission Community knows it must have the final say on what is being done by large business and landlords to the community we live in.

MCO is trying to get all the people in the community to come to meetings to talk and decide what means are necessary to halt BART and the new trends pushing us from our homes.

The people must watch that decisions are not made by a few whose only interests are more profits and higher rents.