BART's Plans for the Mission: Tacos, Towers, and Miniature Vehicles

BART’s planners promised that the transit line would fuel growth and development in the Bay Area by creating jobs and bringing the region money for construction and industry. BART promotional materials assured the region’s residents that the benefits of BART – social, economic, technological – were endless, as the rapid transit system would stimulate economic growth, create safe transit routes, and expand the central business districts of San Francisco and Oakland.

The Mission District offered one such avenue for economic growth and the expansion of San Francisco’s urban core. After the four downtown San Francisco BART stops, the Mission’s 16th and 24th Street stations were the next closest stations to the city’s central business district. BART directors noted that the Mission would be an important place to focus construction and redevelopment, because it had long been a popular San Francisco shopping area. (1) One early plan, created by Okamoto/Liskamm Architects, Urban Designers in May 1966, explored how to maximize this potential from the Mission’s BART stations. This plan proposed surrounding these stations with towering high-rises, commercialized BART plazas, large parking structures, and elevated sidewalks (Figure 1). The high-rises would incorporate at least 13 floors of offices and high-density housing. Terraces, “sunken plazas,” restaurants, and benches would provide people a place to linger, while elevated walkways, escalators, elevators, and moving sidewalks or even a “miniature vehicle service” would speed people to their destinations within the plazas. The images showed ample car parking, covered bus pickups, kiss-and-ride drop-offs, and lots of space for pedestrians, easing commuters’ access to these stations. (2) Each of these elements would help move people efficiently through the station, providing them the option of moving quickly and avoiding encounters with other people, if they so desired. 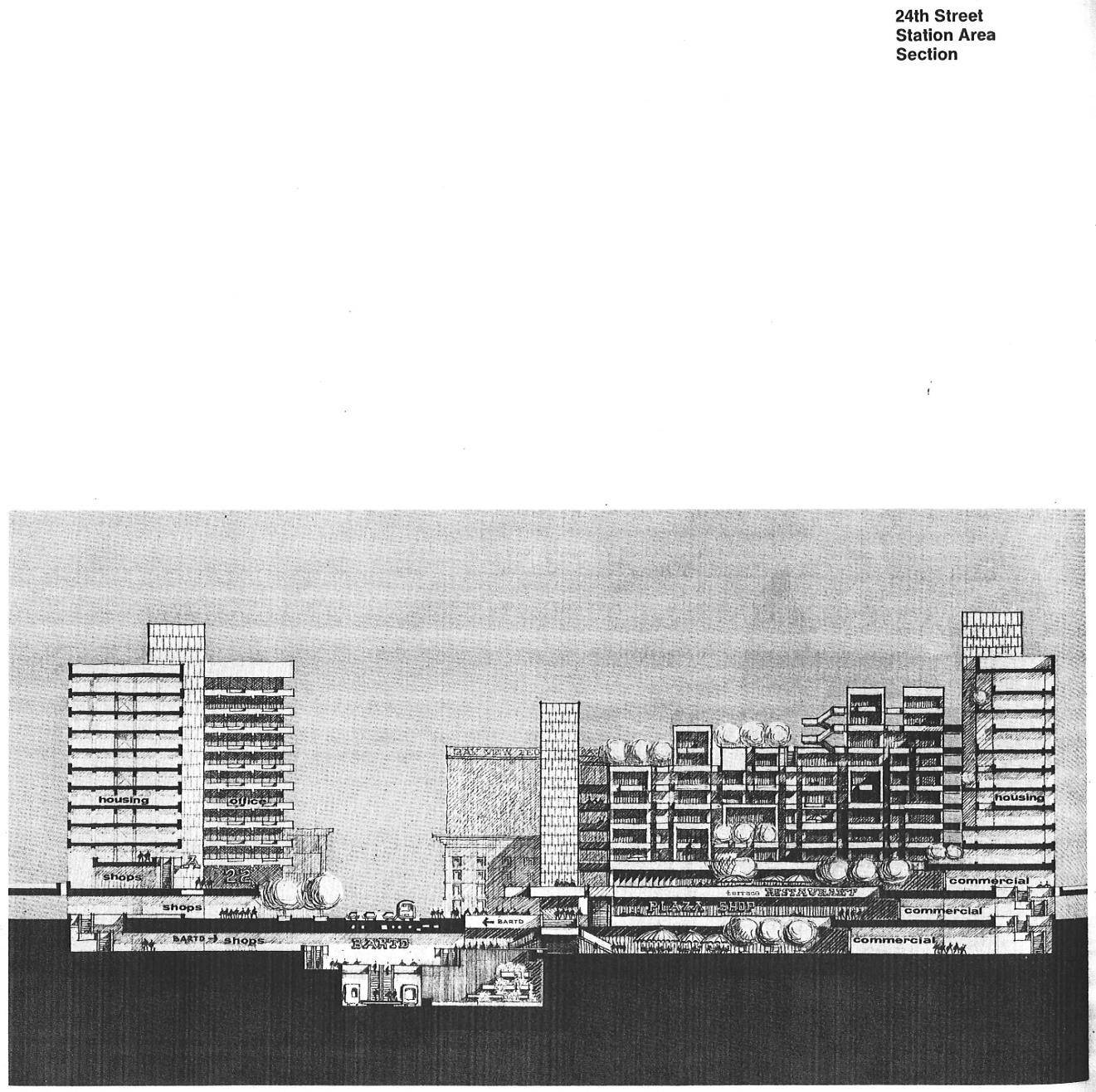 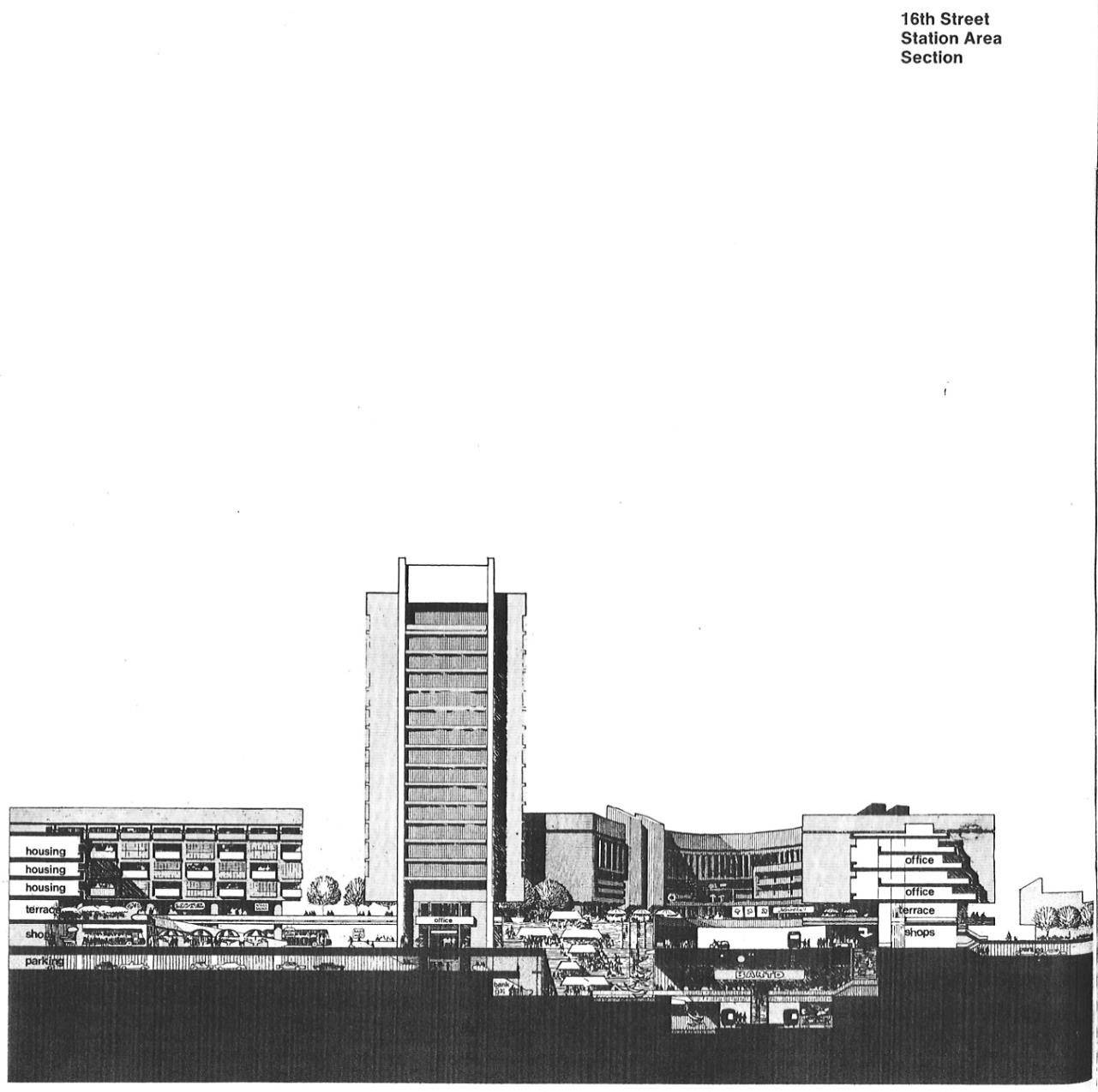 These plazas would be filled with movement – commuters rushing about, automobiles and buses driving and parking, and BART trains speeding through. But, they also offered places to pause and rest, to stop and socialize, or to leisurely consume. Terraces and plazas would be “arranged to receive the warm afternoon sun.” (3) Trees, fountains, and artful elements would create pleasant spaces for people to gather, and umbrella-covered tables and benches would provide places for shoppers to rest, commuters to socialize, or pedestrians to observe the busy plaza’s happenings. The 16th Street station would include an “open-air shopping stair for gift shops, flowers, and crafts, leading to the new street-level Plaza and the rapid transit below.” (4) Figure 2 showed this open plaza that would allow for efficient movement of commuters while also offering people a space to talk, rest, and shop. This image referenced the Mission’s Latino character in stands that sold piñatas and tacos, as well as a bodega. Despite this consideration of local identity, such features seem largely symbolic. Despite this nod to the neighborhood’s latinidad, the Okamoto/Liskamm team made an effort to create a comfortable space in which Mission residents and commuters could linger and enjoy the station’s amenities. This attention to the Latino use of public spaces acknowledged the role of plazas in Latino culture as a gathering place. (5) While this plan would have transformed the neighborhood and its economy, its attempts to take into account Mission residents’ ways of life did try to blend the development coalition’s and Mission residents’ ideas of safe and usable spaces. 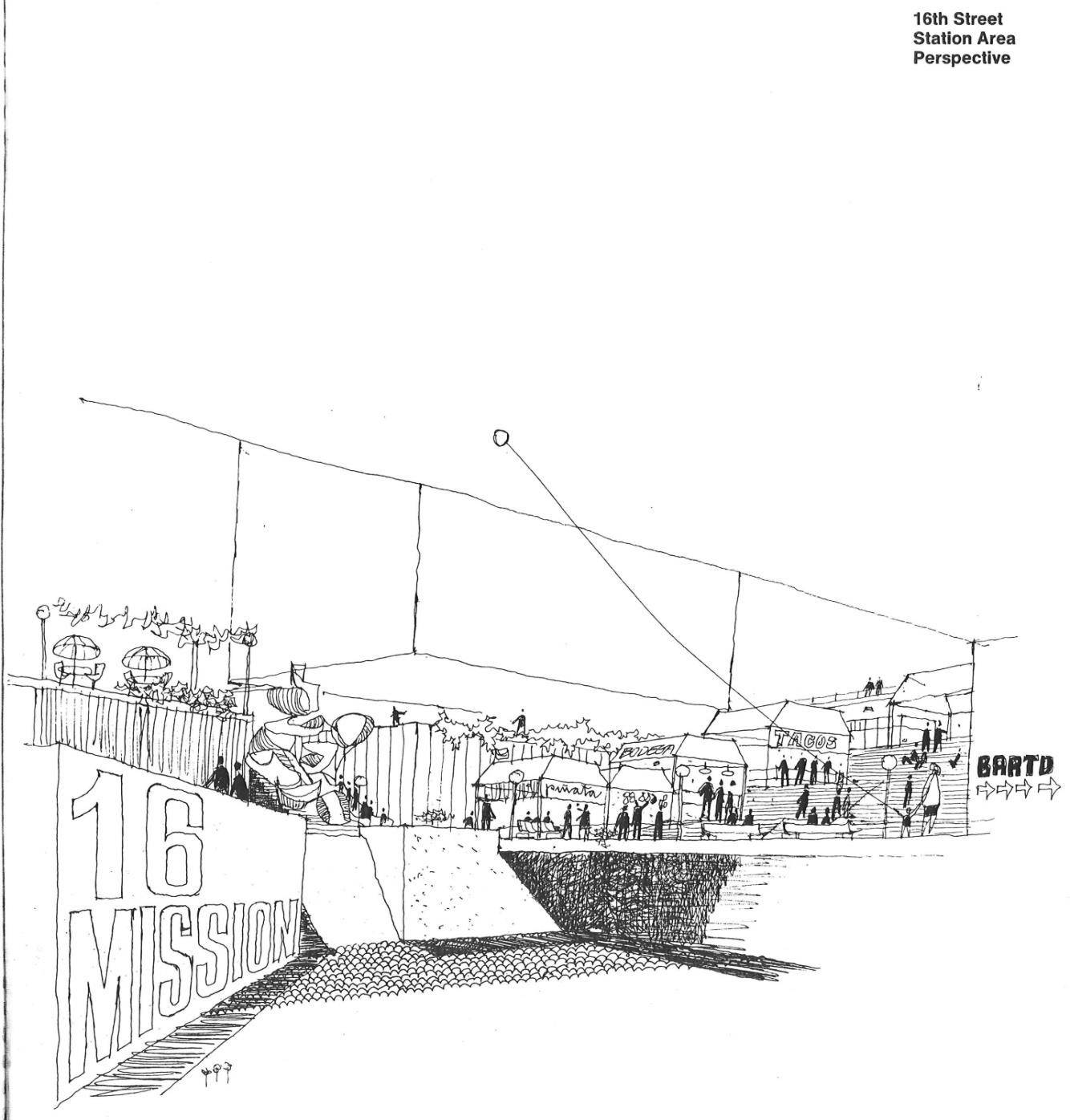 Despite these symbolic efforts to incorporate the latinidad of the Mission, ultimately these designs communicated the desire of BART directors, planners, and the larger development coalition to nurture the growth of young singles and childless couples in the city. While much of BART’s efforts involved easing the transit of suburban commuters to urban office towers, the rapid transit system brought an opportunity to build revitalized, upscale housing and new office spaces along the BART corridor as the value of the land surrounding the stations skyrocketed. As these spaces around the stations boomed, new residents and businesses would flood into the area, further increasing property values. Planners sought to develop upscale housing to attract this new demographic to the city as workers and as residents. Images in the Okamoto/Liskamm plans revealed the great scale of revitalization and replacement that planners envisioned. These changes could have disastrous consequences for current residents, business owners, and neighborhood organizations. Plans like these revealed how the visions of the development coalition and their plans for “safe spaces” always meant disrupting the safe spaces of others.

These grand BART plazas never materialized, in part because of the activism of Mission residents. Fearing the wide scale destruction these plans promised and the heavy hand of the SFRA, Mission residents convinced the Board of Supervisors to abandon these projects. (6) Mission residents would continue this type of activism with the MCO, and they cultivated neighborhood organizations with municipal power like the Mission Model Neighborhood Corporation that sought to mediate the powers of unchecked speculation and municipal redevelopment projects. (7) In this case, BART plans shrunk in scale. BART still built underground stations with above-ground plazas (about 1,000 square feet each) and long escalators bringing commuters into the station. (8) Figure 3 demonstrates the simplicity of these stations built in the Mission – lightly-landscaped with just a few benches and open on the surface level to increase visibility and to ease pedestrians moving in multiple directions. These simple plazas look nothing like the tall beacons of prosperity in the Okamoto/Liskamm plans (Figure 1). While BART changed Mission spaces by boosting property values and encouraging corporate expansion in the neighborhood, its construction only minimally altered the Mission landscape. 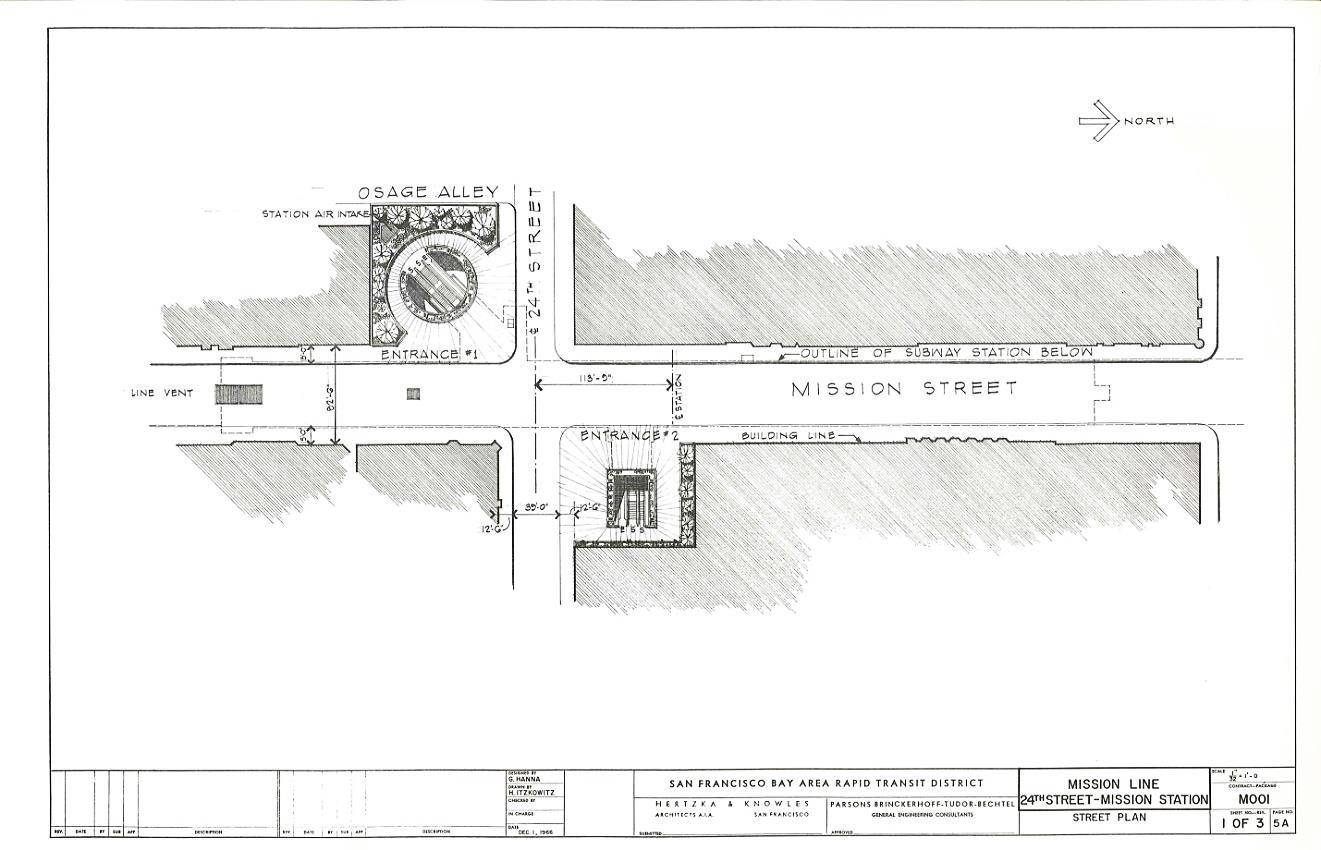 While lacking the kitschy taco and piñata stands of the Okamoto/Liskamm plan, the final Mission BART stations included artwork that architects, planners, and journalists thought would appeal to the residents’ Latino heritage. Both stations included cast concrete sculptures created by British artist William Mitchell adorning the walls of the tunnel that passengers passed as they descended into the stations’ mezzanine levels. (9) In addition, artists decorated the stations’ gray concrete walls with colorful mosaic patterns in Mayan-style tile inlays, which one journalist described as “recall[ing] the cultural heritage of many who have lived in the district.” (10) One journalist described these $8-million Mission stations as “colorful, pleasant and in harmony with the Spanish-speaking heritage of the area.” (11) BART directors valued simple and elegant design in its stations, believing that the “soaring structural forms, steel and concrete in an infinite variety of textures, bronze and stained glass, mosaic and marble,” would appeal to potential riders. (12) By integrating unique architectural and design elements into each station, BART directors worked to create “a transportation complex with an accent on architectural beauty and passenger comfort.” (13) However, BART planners hired outsiders to complete the commissions for the Mission station’s unique art and design elements. These artworks did not highlight the culture and art popular in the Mission. Even in its artistic choices, BART sought to minimize conflict to make riders feel comfortable and safe rather than celebrating the local culture of the neighborhoods surrounding these stations.

In envisioning the stations’ ambiance, BART planners also aimed to clean up and beautify the areas around its stations to help commuters feel secure in a predictable environment. In the Mission, BART planners approved plaza entrances that spruced up these areas, installing benches, trees, and lighting to brighten up the corners at 16th and 24th Streets. Architects built entrances to 700-foot-long underground stations in these plazas. (14) Some Mission merchants contested this choice because it would increase pedestrian and road traffic at already busy intersections, and they suggested instead moving BART entrances down the block. BART Engineer E. John Ray dismissed this idea, explaining that the corners provided the most convenient crossover for passengers transferring between Muni and BART. (15) The numbers of commuters BART planned to serve outweighed the concerns of local businesspeople – its directors expected the two Mission stations to accommodate a combined 28,000 passengers per day by 1975, an estimate that did not include those using its benches, plazas, and facilities for relaxing, socializing, crossing under the street, or waiting for friends. (16) While not the model adopted for the Mission stations, Figure 4 demonstrates how BART planners envisioned the rapid transit stations fitting into the landscape of the Mission. Well-dressed commuters moved through the station, protected from the streets by the walls and tunnels that cocooned them. Escalators enabled them to quickly get from the street level into the station to catch their ride. By minimizing automobile traffic, BART would solve the city’s traffic congestion problems as well. The commercial strip looked booming and vibrant, as a result of this rapid transit construction. BART promised the Mission a taming of its chaos through controlled transit with clean and safe spaces free from confrontation and conflict, that would create a neighborhood in which retail shops and other commercial spaces would flourish. 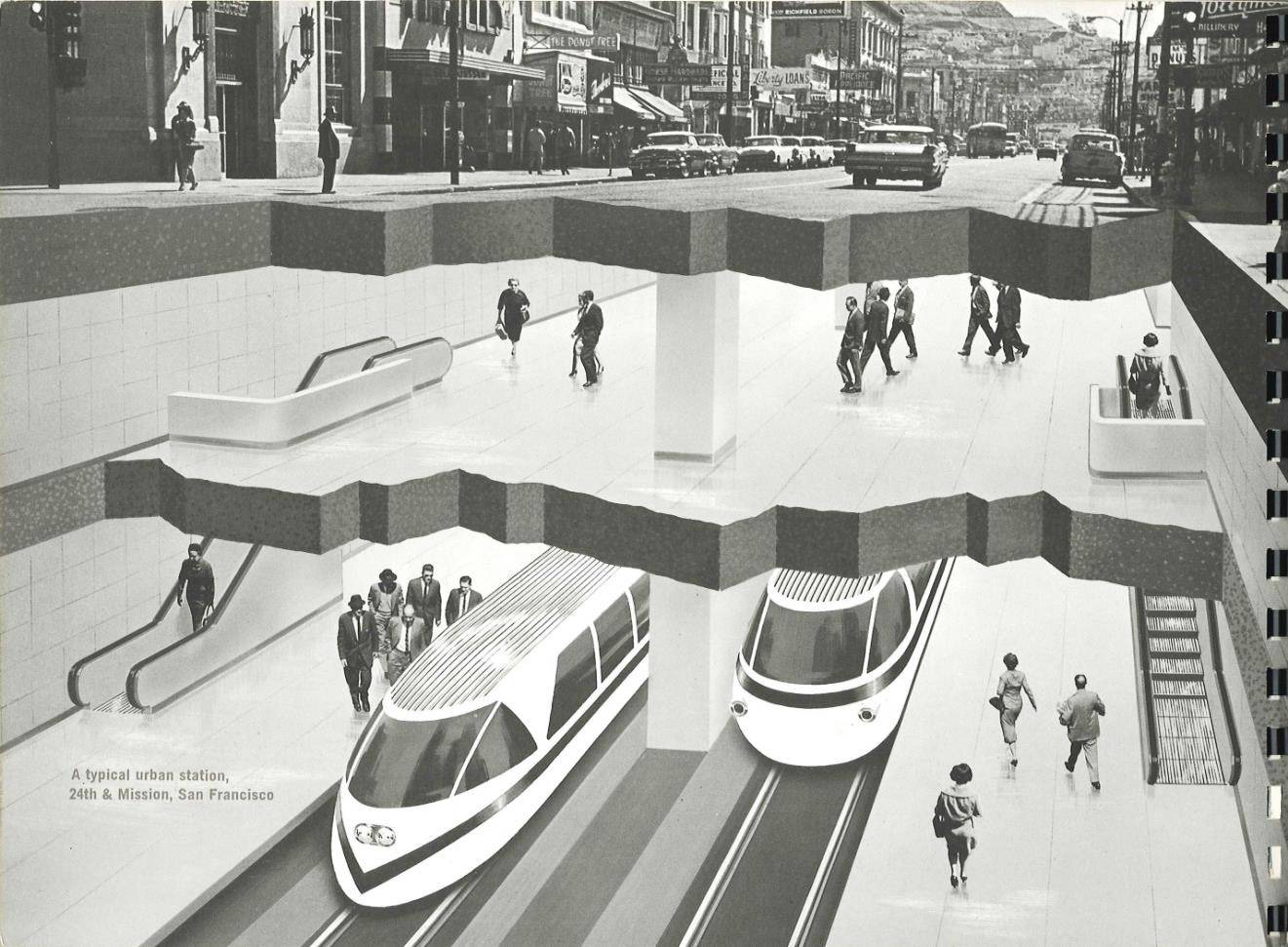 5. On plazas in Latino culture: A. K. Sandoval-Strausz, “Latino Landscapes: Postwar Cities and the Transnational Origins of a New Urban America,” Journal of American History 101, no. 3 (December 1, 2014): 816.

6. San Francisco Department of Planning, San Francisco Redevelopment Agency, A Survey and Planning Application for the Mission Street Survey Area (May 1966), File 148-66-3, Archives of the San Francisco Board of Supervisors, San Bruno, CA.