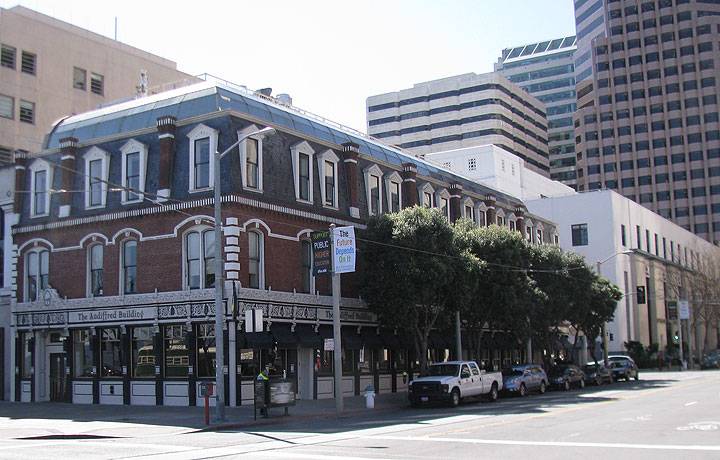 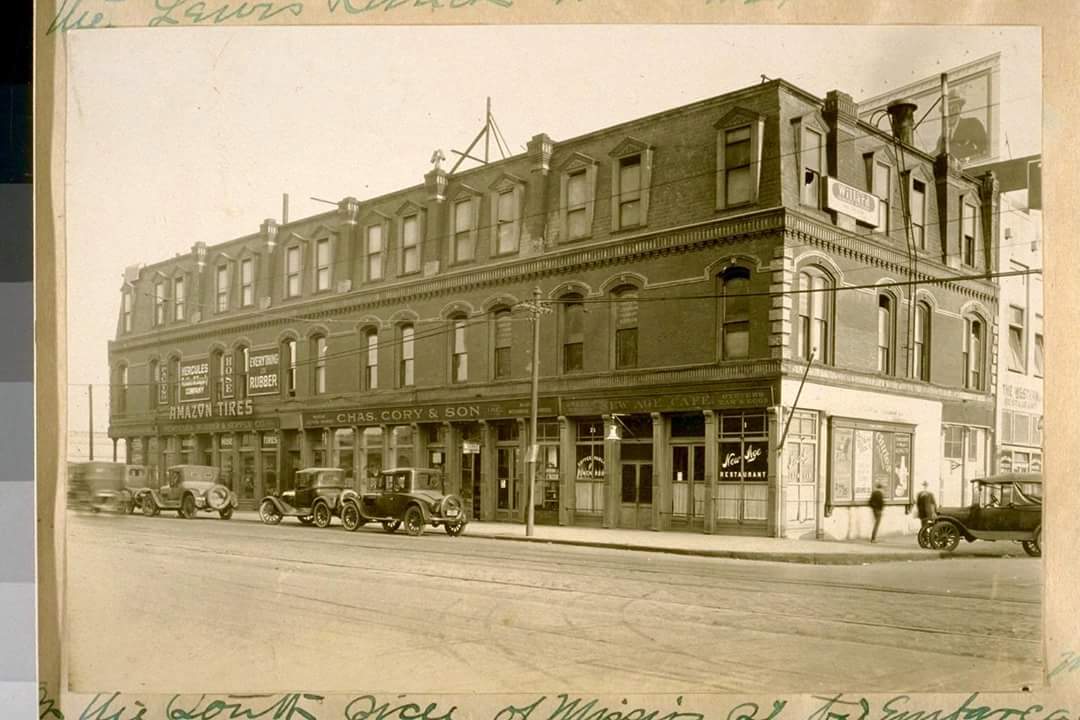 The Audiffred Building is a commercial waterfront building, constructed in 1889 in the Parisian Second Empire style for nostalgic Hippolite D’Audiffret. From the beginning it has played a central role in labor history and life on the waterfront.

In the 1880s, San Francisco had the busiest waterfront on the west coast, a harbor filled with ships, a waterfront bustling with commerce, and shops serving every maritime need. The initial tenants of the Audiffred Building were the Sailors Union of the Pacific (SUP) upstairs and three saloons and a restaurant on the ground flood. The SUP remained until 1905 when it moved around the corner to East Street, now The Embarcadero. For many years the building provided space for waterfront workers to socialize and organize. Other maritime unions and associations with offices in the building in the early years included the Marine Engineers, the Masters and Pilots, the Pile Drivers, probably the Marine Firemen and Marine Cooks and Stewards, and for a brief period before World War I, the Industrial Workers of the World.

In 1901 the building served as the headquarters for the City Front Strike, a long and violent strike protesting inhumane conditions of seamen and ship owners’ efforts to break the union. Eventually the union defeated the Employers’ Association, and the Teamsters became firmly established.

When the 1906 earthquake leveled the city, the Audiffred Building remained standing, by, according to legend, the publican, or a bartender, of the Bulkhead, a ground floor tenant, bribing the firefighters with two quarts of whiskey each and a cart full of wine. 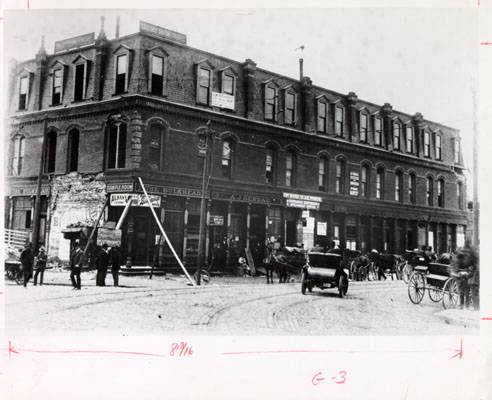 In 1934 during the longshoremen’s strike, two strikers were killed by armed National Guardsmen in front of the building on what has become known as “Bloody Thursday,” an event still commemorated annually outside the building.

As the hub of commercial activity moved to other parts of the City and to Oakland, the area turned into a skid row. Following this trend, in 1946, a club for homeless sailors, the Seven Seas Club, became a tenant in the Audiffred. Soon after, various rebel artists and writers moved into the upper two floors, until those floors were condemned in 1955. The 4-level Embarcadero Freeway built in the 1960s boxed the building into a dark corner, cutting it off from the waterfront and leading the area to further dereliction. 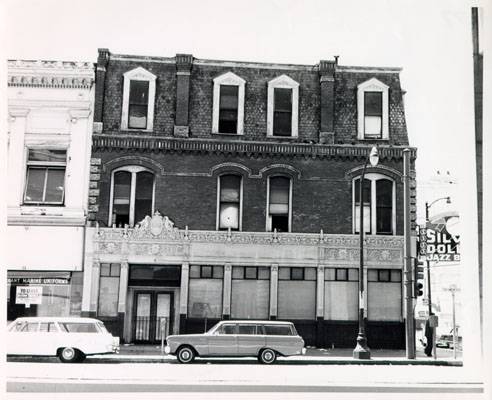 Audiffred Building at Mission and Embarcadero, 1964.

A fire from a gas main break gutted the building in 1979, leaving it scheduled for demolition. The people of San Francisco spoke out, and joining forces with the Department of the Interior had it declared Landmark Number 7 of the City of San Francisco in 1981, and placed on the National Register of Historic Places. It was restored over a two-year period, and then in 1991 finally saw the light of day with the removal of the Embarcadero Freeway. Since 1993, the Audiffred Building has been occupied by the restaurant Boulevard. 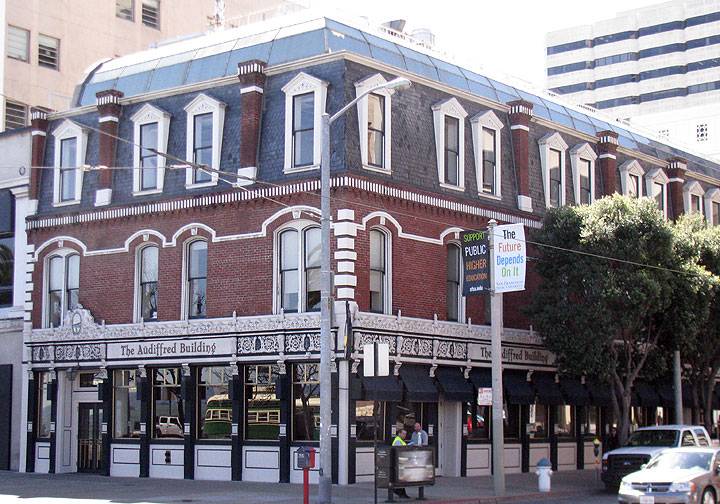 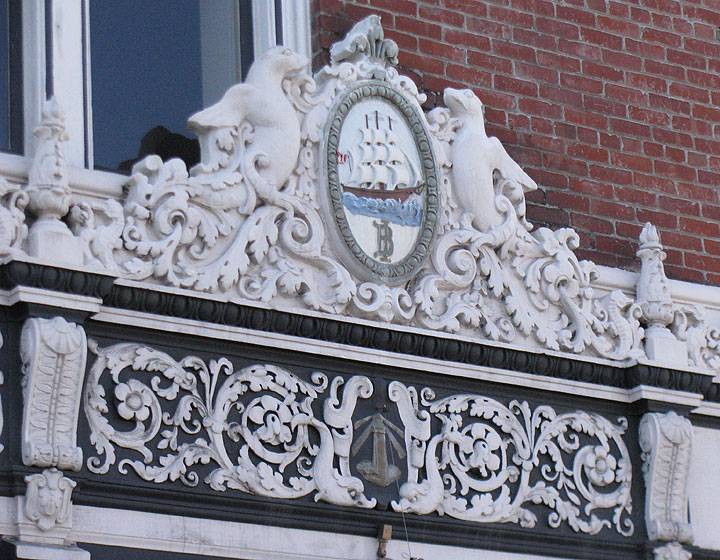 Detail on front of Audiffred Building, 2012.

The Audiffred Building, 1-21 Mission Street. During the Great Fire of 1906, this whole area was dynamited by firemen, who wanted a firebreak between the burning city and the wharves, where tons of emergency supplies were being off loaded. Though they blasted to smithereens every other building for blocks around (except the Ferry Building) the firemen spared the Audiffred Building, home of the renowned and venerable Bulkhead Saloon. As they were laying their charges, the bartender raced out and made them an offer they couldn't refuse: a keg of whiskey per fireman, and a whole wagon load to be delivered later, if they'd just spare this one building. The firemen withdrew, and the building was saved.