Arnieville Encampment and the Birth of CUIDO 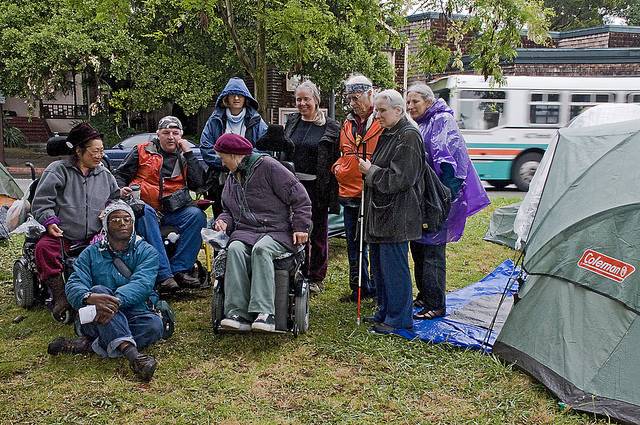 Arnieville protesters camp out on a street median. A coalition of homeless and people with disabilities. The poet, Jean Stewart, is seen in the center of the photo.

CUIDO, Communities United In Defense of Olmstead, is a small, passionate grassroots organization of disability rights activists located in the East Bay that was formed in 2010 during a month-long encampment called “Arnieville,” which was organized to protest Governor Schwarzenegger’s proposed state-budget cuts of In-Home Social Services and other social securities.

In May 2010, CA Governor Arnold Schwarzenegger announced that there would be $673 million in cuts to social programs including $264 million in cuts towards In-Home Supportive Services.1 The IHSS program provides services to low-income seniors and people with disabilities who live in their own home to maintain their independence and to help prevent more costly out-of-home care. The cuts would also limit domestic services to only those with the greatest need and would pay less and offer fewer hours to health workers.2 It was declared that cuts would be achieved through rigorous anti-fraud measures, such as requiring providers and receivers of IHSS to undergo a background check. Schwarzenegger proposed that until proven otherwise, IHSS recipients were to be seen as fraudulent and undeserving of the services.3 Schwarzenegger’s budget proposal planned to eliminate 60% of IHSS recipients and reduce IHSS wages by 30%. Over 260,000 low-income seniors and people with disabilities would lose their in-home care assistance. The suggested alternative to IHSS for some of these individuals would be nursing homes, which are approximately 5 times as expensive as IHSS and very unaffordable to low-income individuals.

The name, Arnieville, was a play off Hoovervilles in the Great Depression and Reaganvilles in the 1980s, and was intended to mock Schwarzenegger. On May 21st 2010, people got together in “tent cities” on the median strip of Adeline Street in South Berkeley. People with disabilities, seniors, home-care workers, and their allies camped out for a total of four days to protest Governor Schwarzenegger’s proposed budget cuts to social services. The 4-day encampment ended with a celebration of the publicity that the campers had achieved surrounding the budget cuts. Jean Stewart told the Daily Planet that more than 200 people stopped by or slept outside in tents during those four days, and that it assembled the members of Berkeley’s disabled community. Organizer Dan McMullen stated that unless an acceptable budget was signed in the meantime, the encampment would be back on June 22nd.

How CUIDO has emerged

CUIDO continues to be dedicated to defending the human and civil rights of people with disabilities.4 CUIDO prides itself on being a non-hierarchical group of about 20 individuals that engages in collective-decision making, direct action, and civil disobedience. The group is a rare cross-section of a wide range of disabilities including people with mental, psychiatric, physical, and invisible disabilities along with deaf persons.

The group decided to take the name of the 1999 Supreme Court decision Olmstead v L.C. that interpreted the 1990 Americans with Disabilities Act, and mandates community integration of people with disabilities. Their name, “Communities United in Defense of Olmstead,” highlights not only who they are—a united community—but also what that are fighting for: the legal right of people with disabilities to live in society with the least amount of restrictions.5 CUIDO is not a radical organization that demands new rights, but rather is a strategic organization that interprets legislation and defends the established civil rights of disabled persons. They are not afraid to go to jail for actively and publicly defending their rights through sit-ins, street theaters, public blockades of streets and buildings, letter-writing, leafleting, and marches.6 Ken Stein described CUIDO’s movements as something that he as an “insider”—someone who works for a state-funded disability rights organization—could not do. Being an “outsider,” or an organization that is independently run and funded, CUIDO is able to try and attract attention to issues by participating in wild acts of civil disobedience.7

Sure enough, Arnieville returned in June, on the 21st anniversary of Olmstead, this time for an entire month-long encampment. When they returned, they came armed with signs that said, “Let’s terminate Arnie;” “Save homecare, Medi-cal, Cal works…mental health;” and “not acceptable”.8 The camp included thirteen tents in a circle, some armchairs, rugs, kitchen tents, a hotel tent, mattresses, a port-a-potty, a portable sink, and a collective meeting area. There were about seventeen consistent protesters/campers, but many additional people stopped by out of curiosity or to show support. Camping out on the streets was a huge accomplishment for individuals with disabilities who chose to suffer for a month in hopes of making changes for the future. As many of those who spent the night were chemically injured, their dedication to their presence on the Adeline median is remarkable. Despite the headaches, nausea, dizziness, difficulty breathing, and other symptoms that are provoked by car exhaust and other pollutants, these activists did not give in.9

Essential to sustaining the encampment on the median strip was the cross-disability community they developed, the support from the surrounding community, and the donation of necessary amenities. The Berkeley community contributed through monetary donations, as the camp took around $800 to run per week, and through providing meals and clean dishes. Additionally, the city showed its support by shutting off the sprinklers on the island. Daily activities included open meetings at 2pm, which were run as a pure democracy, in which everyone had the opportunity to speak their opinions and every decision was made collectively. Sign language interpreters were present at every one of these meetings, and were funded and organized by DREDF (Disability Rights Education and Defense Fund). There were also teach-ins, workshops, music, street theater, videos, art classes, poster making, and other educational and entertaining activities. The acquisition of a generator not only helped in putting on movies, but also charged wheelchairs for those who need assistance to transport them. Another feature of the encampment was a mailbox where they encouraged community members to drop off letters to mail to the governor’s administration challenging the budget cuts. The second manifestation of Arnieville was the longest running contemporary disability rights protest in the United States.10 AIDS/ARC Vigil 1985-1995 “We were even longer than the 504 sit-in, which was only 28 days,” said Stewart. One hard fact is that Arnieville did not stop Gov. Arnold Schwarzenegger from cutting funding to social services, but it did fuel the continuing work of CUIDO. Understanding how the community came together highlights the foundations of CUIDO, which was formed during Arnieville based on inclusive, democratic principles.

As Arnieville drew to a close, the tents were taken down, but the protesters were not abandoning their cause. Soon after the month-long encampment, the people were ready to take their protest further. They were hopeful and ready to take on the capital.11 Moving forward from their long encampment, CUIDO’s goal in 2010 was to focus on continuing to educate the media, and thus the public, about the “shortsightedness of cutting IHSS”.12 When the final budget cuts were made later that year, some of the cuts CUIDO had been fighting did not go through, though other cuts were made (Morning March). CUIDO members were satisfied with their efforts and demonstrated an eagerness to continue defending disability rights in the East Bay. CUIDO holds weekly meetings at ADA accessible locations to keep up on important issues.

In early 2014, CUIDO is involved with defending the East Bay Regional Forests from projected and imminent clear-cutting, along with the protest against pesticide usage on public lands. When Marg Hall learned about the FEMA grant proposal for clear-cuts and a follow up of years of herbicide use in the Berkeley and Oakland hills, she presented the issue at a meeting. The use of pesticides caught the group’s attention since many of the members had chemical sensitivities. Another trigger was the fact that one of the same trees that the proposal was threatening to cut, stood outside the window of where they were holding their meeting.13 Disgusted with the proposal, CUIDO members collectively decided to take a stance to prevent the funding. The imminent nature of the movement is that UC Berkeley, the City of Oakland, and East Bay Regional Parks District have all submitted grant applications to the Federal Emergency Management Agency (FEMA) to carry out fire-reduction activities. The impetus is that these areas have had a history of significant wildfires. This process would include a total estimated tree removal of: 54,000 from UC Berkeley, 23,161 from Oakland, and 409,176 from East Bay Regional. After the site is cleared, herbicides will be necessary to prevent the re-sprouting of non-native invasive species, such as eucalyptus and acacia trees. It is estimated that there will be 633 to 1266 gallons of herbicide used in Berkeley and Oakland, and 3356-6713 gallons used for the EBRPD.14 CUIDO believes that pesticide use is a violation of the ADA. The ADA protects people with disabilities right to access public places and guarantees people with environmental injuries the right to receive accommodations. There has been increasing evidence that the toxic stew of chemicals that has been released into the environment is impacting endocrine systems, organ functions, and respiratory systems. The widespread use of herbicides, would prevent people with chemical sensitivities, a nationally recognized disability, from using these public lands. Marg Hall personally suffers from both respiratory and nervous system environmental injuries and becomes very ill from exposure to pesticides. What is more concerning is that the extent of how chemicals react over time and that their inert impacts are unknown, and therefore dangerous since chemicals have not generally be proven to be safe. In fact, “many people exhibit minor signs of intolerance to pesticides. This issue deserves media attention”.15