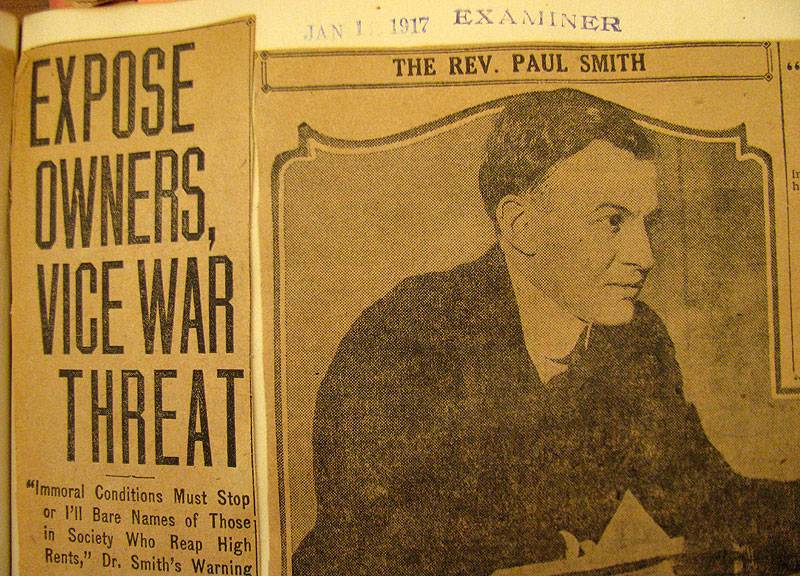 The presence of “self-made” men like millionaires Sutro and Fair on the boards of the kindergarten associations reinforced the widely held belief that California offered success to any American willing to work hard. San Francisco kindergarten supporters, like their colleagues elsewhere, distinguished between “the worthy poor” (down on their luck due to sickness, accident, or death) and “paupers” (malcontents who avoided honest work and drank in saloons). The kindergartens could help turn children away from the temptations offered by “the 3,300 gin shops and corner groceries of the city, and the use of opium.” After an interview with Cooper journalist Milicent Shinn argued in the Overland Monthly that drunkenness and laziness are the real cause of poverty in San Francisco” and “the lowest poverty may be said to belong to the foreign classes.” This was significant, in her view because the “population is more than half foreign; with more saloons and open vice of any sort than any other city in the Union.” Reformers argued that if the poor would withstand “the monster evil intemperance” and similar temptations, they stood a much better chance of prosperity in San Francisco than in eastern cities. Protestant and Jewish reform groups generally supported Sarah Cooper’s belief that “aside from drink and vice, and the calamities of vice, there is no deep poverty here.”(22)

Catholic charity organizations, influenced by the theory that poverty was an unavoidable part of the human condition, took issue with the concept that the causes of poverty could be isolated like germs and cured by properly administered social reform medicine. The head of the Sisters of Mercy, a group active in dispensing charity in the South of Market area, agreed that alcoholism aggravated the troubles of unemployed workers and their families but insisted that the more basic problem was a shortage of jobs. The Mother Superior refused to accept the contention that immigrants and their children brought their troubles on themselves by their lack of motivation and their addiction to harmful substances. In her view, the Irish and other immigrant groups should not be blamed for lack of motivation, for many who wanted to work could find no jobs.(23)

Differing viewpoints about poverty did not stop Catholic, Protestant, and Jewish moral reformers from joining together to abolish the city’s red light district. San Francisco’s “purity crusade,” like its counterparts in other cities, raised the banner of Judeo-Christian morality and family respectability against the Satanic cunning of white (and Asian) slavers and the profligacy of men who preferred to purchase their sexual pleasure. In 1895, Father M. Otis began a campaign to close the brothels in a Chinatown alley across the street from St. Mary’s Church. In 1897, a grand jury report publicized some of the lurid details of the houses along Pacific Street in the Barbary Coast area. Then Father Otis intensified his campaign by joining forces with the Reverend R. C. Foute of Grace Episcopal Church. Soon Father Terence Caraher, pastor of the Church of St. Francis in North Beach and chairman of the Committee of Morals of the North Beach Protective Association, became a leader in the campaign to shut down the Barbary Coast brothels. He was joined in 1912 by J. C. Westenberg, an uncompromising evangelist who headed the Whosoever Will Rescue Mission located in the thick of the Barbary Coast on the 400 block of Pacific Street. Westenberg announced that he would tour the nation under the auspices of the American Purity Association calling for a boycott of the upcoming Panama Pacific International Exposition unless the Barbary Coast was out of business by 1915. He threatened to “photograph every dive and brothel . . . and send copies to every newspaper and periodical, religious and secular in the world.”(24)

Westenberg’s demand for immediate abolition of the vice district met with considerable sympathy among like-minded members of the city’s Protestant, Catholic, and Jewish congregations. At the same time, many dissenters opposed the purity crusade, and this more tolerant group argued for a continuation of the policy of regulated vice that had been established in San Francisco by 1912. Clayton Herrington, a prominent judge in the city, expressed their point of view when he argued that “San Francisco is no worse than other large cities; it is better than a great many I have seen in other parts of the world.”(25) Mayor James Rolph himself, in a vehement letter to Westenberg that he never mailed, expressed the “live and let live” point of view that many San Franciscans shared:

In replying to you who seem, from your letterheads, to be the principal repository of all righteousness, I reply to all the self-advertising pharisees and all the well-meaning hysterics who have been agitating so loudly to reform other people's morals. I propose, in this administration, to draw the line carefully between vice and amusement, no matter how humble that amusement may be. Many of the people who are now calling for intolerant restrictions would not be satisfied until they destroyed all the amusement and entertainment that have given San Francisco life and character throughout the world.


We are the Portola City.
We ask the world to come here and revel.(26)

Despite his personal views, Rolph ultimately adopted a more conciliatory position, and he approved measures that led to the closing of the “wide open” vice district in February 1917. After the nation declared war in 1917 and San Francisco became an active military port, the Police Department created a morals squad to suppress the prostitution that continued to flourish. Purity crusaders were pleased with its work. One irate citizen, however, describing himself as “an unmarried man for very good reasons,” informed Mayor Rolph that “these dirty sneaking skunks of the Morals Squad are a stench in the nostrils of all manly men.”(27)

Closing down the Barbary Coast made social purity official policy, but the city’s demand for illicit pleasure kept its flourishing “underworld” alive during the 1920s and 1930s. Private detective and former FBI agent Edwin N. Atherton’s report to the grand jury in March 1937 dramatized the extent to which the social purity policy served purely symbolic purposes. The Board of Supervisors hired Atherton’s firm, and it spent sixteen months investigating vice and police corruption. City newspapers emphasized the sensational finding that bail bondsman Peter P. McDonough and his brother deserved the title “fountainhead of corruption.” The McDonough brothers were at the center of an underworld empire of approximately 135 “regular, old established” houses of prostitution, regular violations of closing hours by saloons, abortion mills, operations for the fencing of stolen property, and extensive gambling operations, including bookmaking, lotteries, slot machines, and gambling houses. Atherton estimated that the police received at least $1 million in graft each year, and he implicated sixty-seven police officials and twenty-four other government officials by name. Atherton’s report led to the revocation of McDonough’s bail bond license and toppled him from his position as the “fountainhead of corruption.”(28) 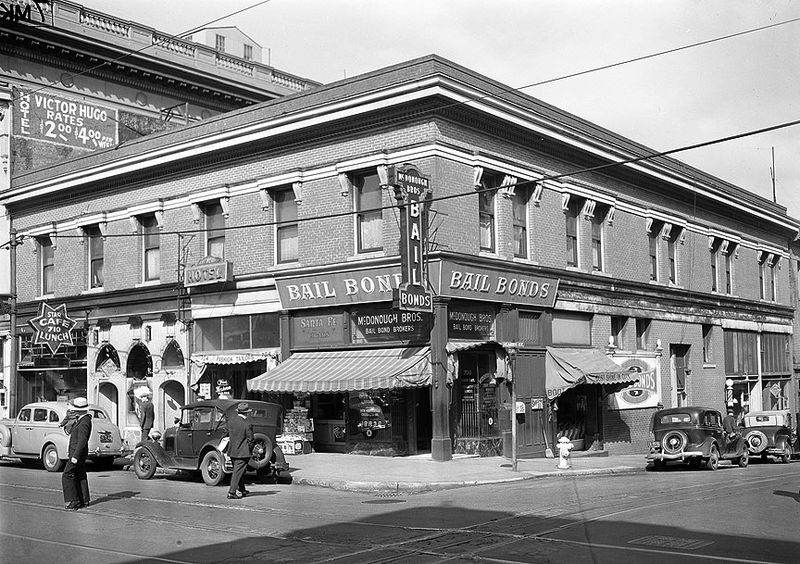 Right across the street from the Hall of Justice on Kearny.

Atherton himself took pains to remind the grand jury that “police graft has its origins in prostitution, gambling, and other illegal activities” and recommended that San Francisco legalize all such businesses. Unhappy with the “absence of any continuous, active support from prominent citizens or groups” and at the “somewhat synthetic beginning” of the investigation, Atherton also criticized Mayor Angelo J. Rossi for what appeared to be lack of leadership. The investigator pointed out that “when we were employed, we were informed this investigation was not intended to be a moral crusade in the sense that it should bring about the closing of unlawful businesses, as such a course was contrary to the desires of the great majority of San Franciscans.” Atherton agreed to this policy “and adhered strictly to it throughout the investigation.” “We were aware,” he wrote, “that the bulk of the people wanted a so-called ‘open town’ and that the history of San Francisco reflected a public attitude of broad-mindedness, liberality and tolerance, comparable probably to only two other American cities, namely New York and New Orleans.” He was unhappy at one of the by-products of the constraints imposed on him when his project “unfortunately, became known as the ‘Atherton investigation’ instead of being recognized as a civic enterprise.” As long as official San Francisco prohibited vice but allowed it to flourish, proclaimed purity but tolerated license, the city could not reduce graft. “Punitive action will not cure the evil condition. The cause must be removed.” “Those persons who think that prostitution and gambling are stopped because of prohibitive legislation, must be likened to the ostrich of popular repute.”(29)

Twenty-two years earlier, a prominent leader in the national anti-prostitution movement foreshadowed Atherton’s argument by observing that “the law is an instrument much more difficult to use than is commonly supposed.”(30) Paul Boyer recently has shown that the nation’s “great coercive crusades” against the brothel and the saloon “ultimately failed.” Well-to-do “patricians and business leaders” all over the country, convinced of the need for “the creation of greater moral cohesiveness in the sprawling and heterogenous cities,” agreed in principle with Father Caraher even when, as in San Francisco, they adopted a laissez-faire attitude. Nonetheless, beginning in the 1890s, “they channeled their real energies into less explicit social control efforts involving the beautification and enrichment of the city’s physical environment.(31)