Almost two decades after global protests against atmospheric nuclear bomb testing, attention turned to trying to stop nuclear power, one of the most overwrought and self-defeating technologies ever invented. In later years many of these same activists, now much older, would be involved in the timber wars, river restoration campaigns, toxic waste and environmental justice struggles, and more. Barbara Epstein wrote an excellent history of the “nonviolent direct action anti-nuclear and peace movements” and nicely reconnects the anti-Vietnam war movement’s back-to-the-land exodus with the subsequent wave of ecological activism:

By the early seventies, the focus of the left counterculture had shifted to the countryside. Many of the people who had made up the countercultural wing of the antiwar movement were moving to rural areas in northern New England, Northern California, and elsewhere to construct communities where they hoped to live their values and perhaps begin to build a movement expressive of them… The counterculture’s use of guerrilla theater and other forms of creative expression, its lack of interest in the conventional political arena, its emphasis on the creation of alternative communities, all suggested that revolution had more to do with thinking and living differently, and convincing others to make similar changes, than with seizing power. (Barbara Epstein, Political Protest & Cultural Revolution: Nonviolent Direct Action in the 1970s and 1980s (University of California: 1991) 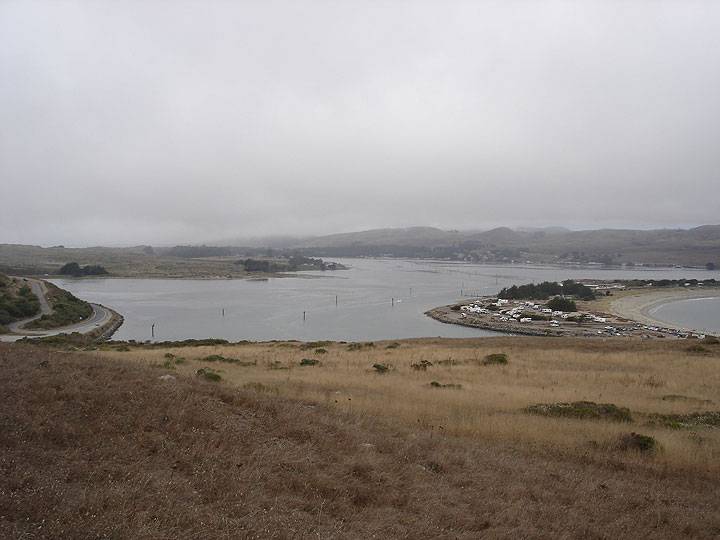 Bodega Head and the lagoon in 2009, where PG&E dug a big hole in the early 1960s to put a nuclear power plant directly on the San Andreas fault.

In California the anti-nuclear movement had been growing for many years. Doris Sloan was one of the residents of the small apple-farming town of Sebastopol in Sonoma County who joined the effort to stop PG&E from building a nuclear power plant on the Pacific coast at Bodega Head (the struggle lasted from 1958-1963). Her proto-ecological opposition was informed by her sympathetic support for the anti-atmospheric testing movement, which had begun to demonstrate the health hazards of radioactive fallout. She recalls that she and her fellow Sonoma County citizens trying to stop the PG&E nuclear power plant did not identify themselves as conservationists or by any particular label. “We just saw ourselves as a small group of people battling for safety and aesthetic reasons. We were battling PG&E because we didn’t think there should be a nuclear plant on the San Andreas fault, y’know?!” PG&E was eventually stopped, but not before digging a big hole at Bodega Head, which is now an oceanside lagoon.

The Diablo Canyon controversy started in 1963 when PG&E gave up trying to build the Bodega reactor. Rather than face similar public opposition at Diablo Canyon, PG&E approached the Sierra Club’s president and cut a deal with certain board members where Diablo would be chosen rather than the Nipomo Dunes area, which PG&E had originally chosen. The Sierra Club president forbade any chapter from opposing Diablo Canyon, so the San Luis Obispo Chapter formed the Shoreline Preservation Conference to oppose the construction on the grounds that the area had been proposed as a state park, was a sacred Chumash Indian site, had some of the largest oak trees on the West Coast, was located on the second to last coastal wilderness area in California, and was very likely sitting on the fault that destroyed Santa Barbara in a 1927 earthquake.

After the shock of seeing oil prices double in 1974, nuclear development in California was getting new support. In 1974-1975 Alvin Duskin, who played an important role in San Francisco and California environmental politics (he had funded a successful public relations campaign against the first Peripheral Canal plans in 1970, and organized hundreds of San Franciscan voters into a grassroots campaign against high-rises, popularly known as the effort to stop the Manhattanization of San Francisco), was involved in funding and organizing a statewide ballot proposition to ban nuclear power plant construction. The vote was slated for November 1975, and this author and many other young college students spent weeks handing out literature in shopping center parking lots and campaigning on campuses and in neighborhoods. PG&E was pressing ahead with plans to build Diablo Canyon, while Southern California Edison was promoting Sundesert, and an additional reactor at San Onofre. Duskin explains his role in this forgotten saga:

I worked with Another Mother for Peace in getting this thing [Prop 15] on the ballot, the people in San Luis Obispo, fighting Diablo Canyon and all that. We stopped Sundesert. We stopped it. They’d spent money on it, Southern California Edison, they’d spent on San Onofre. We stopped that. We led to the decommissioning of the plant up in Eureka [in 1983]. [Proposition 15] said you can’t zone land in California for a nuclear power plant until you can solve the problem of waste. And for existing plants after a year or two, if the problem of waste isn’t solved, the plant has to be de-rated by 5% each year. That would mean that Diablo Canyon and San Onofre would be eventually decommissioned. If they just keep losing 5% a year, it would make them uneconomic to operate.

Duskin was contacted by Sacramento legislators and agreed to help them write a law that would do everything his initiative was going to do, except the de-rating of existing plants. They sold it as the rational alternative to “Alvin Duskin’s radical, communistic, anarchistic, free-love initiative,” (as Duskin himself remembered it in a 2010 interview). When the legislature passed the bill a few weeks before the statewide vote, it successfully killed the anti-nuclear campaign and the initiative was defeated that November. Duskin remembers, “People were consoling me on the streets, saying ‘Alvin, I’m sorry that lost,’ and I said, ‘No, we’ve actually won! They’re not going to build any new nuclear power plants in California!’ ”

But the PG&E nuclear power plant at Diablo Canyon was already under construction and the initiative did not halt its progress. By 1977 groups all over California had emerged to combat nuclear power and they focused their efforts on halting Diablo Canyon before it would go “on line.” Diablo Canyon became the object of a six-year campaign of nonviolent action and full-court-press legal opposition from 1977-1983. Another Mother for Peace, along with dozens of new affinity groups and local organizations around California under the rubric of the Abalone Alliance, campaigned against Diablo Canyon. (The name Abalone Alliance referred to the tens of thousands of wild California Red Abalone killed in 1974 in Diablo Cove when the nuclear unit’s plumbing had its first hot flush.)

The Abalone Alliance carried out an escalating campaign of direct action in the attempt to stop the plant from opening. In August 1977, 1,500 people encircled the gates while 47 were arrested. A year later, 5,000 people came and almost 500 were arrested. When the Three Mile Island nuclear plant had a partial meltdown near Harrisburg, Pennsylvania, an April 1979 rally drew 25,000 people to an anti-nuclear rally in San Francisco, followed by 40,000 demonstrators converging on San Luis Obispo for the largest anti-nuclear rally held at that point in US history. Their biggest effort came in autumn 1981 when 20,000 people rallied in support of a two-week blockade that led to 1,900 arrests.

The Abalone Alliance published its own newspaper, It’s About Times, every two months for almost seven years, offering close coverage of the protests, actions, culture, and political effects of anti-nuclear politics during the 1979-1985 era. The movement widened its focus during those years, seeking to confront the interlocking web of corporate interests behind the push for nuclear power, recognizing in the process that much larger questions were at stake than just a choice of energy production. Anti-nuclear activists protested outside the exclusive Bohemian Club in San Francisco and at the gates of the Club’s private retreat a couple of hours north in Sonoma County.

When Diablo Canyon could no longer be stopped, Bay Area activists turned their attention to the nuclear bomb-makers in suburban Livermore, repeatedly surrounding Lawrence Livermore Laboratories with demonstrations, vigils, marches, and peace camps, while continuing to explore new forms of political organization and decision-making. Other activists went to the remote Vandenberg Airforce Base, attempting to stop testing of ballistic missiles. Others chose to confront the military-industrial complex by blockading military shipments to the illegal wars in Central America, staging “die-ins” in streets and corporate offices, protesting at military recruitment centers, and organizing lecture tours of local high schools to transmit perspectives contrary to the manufactured consensus of corporate-dominated mass media.