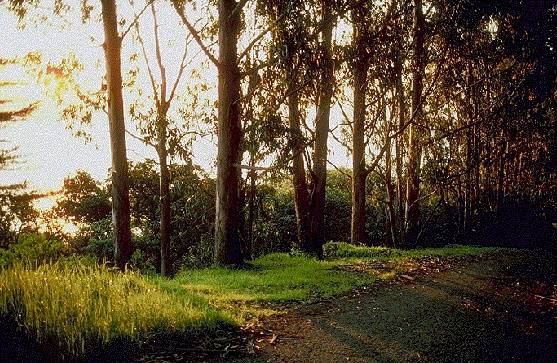 "Two Years Before The Mast"

Having collected nearly all the hides that were to be procured, we began our preparations for taking in a supply of wood and water, for both of which, San Francisco is the best place on the coast. A small island, situated about two leagues from the anchorage, called by us "Wood Island," and by the Spaniards "Isle de Los Angelos," was covered with trees to the water's edge; and to this, two of our crew, who were Kennebec men, and could handle an axe like a plaything, were sent every morning to cut wood, with two boys to pile it up for them. In about a week, they had cut enough to last us a year, and the third mate, with myself and three others, were sent over in a large, schooner-rigged, open launch, which we had hired of the mission, to take in the wood, and bring it to the ship. We left the ship about noon, but, owing to a strong head wind, and a tide, which here runs four or five knots, did not get into the harbor, formed by two points of the island, where the boats lie, until sundown. No sooner had we come-to, than a strong south-easter, which had been threatening us all day, set in, with heavy rain and a chilly atmosphere. We were in rather a bad situation: an open boat, a heavy rain, and a long night; for in winter, in this latitude, it was dark nearly fifteen hours. Taking a small skiff which we had brought with us, we went ashore, but found no shelter, for everything was open to the rain, and collecting a little wood, which we found by lifting up the leaves and brush, and a few mussels, we put aboard again, and made the best preparations in our power for passing the night. We unbent the mainsail, and formed an awning with it over the after part of the boat, made a bed of wet logs of wood, and, with our jackets on, lay down, about six o'clock, to sleep. Finding the rain running down upon us, and our jackets getting wet through, and the rough, knotty-logs, rather indifferent couches, we turned out; and taking an iron pan which we brought with us, we wiped it out dry, put some stones around it, cut the wet bark from some sticks, and striking a light, made a small fire in the pan. Keeping some sticks near, to dry, and covering the whole over with a roof of boards, we kept up a small fire, by which we cooked our mussels, and ate them, rather for an occupation than from hunger. Still, it was not ten o'clock, and the night was long before us, when one of the party produced an old pack of Spanish cards from his monkey-jacket pocket, which we hailed as a great windfall; and keeping a dim, flickering light by our fagots, we played game after game, one or two o'clock, when, becoming really tired, we went to our logs again, one sitting up at a time, in turn, to keep watch over the fire. Toward morning, the rain ceased, and the air became sensibly colder, so that we found sleep impossible, and sat up, watching for daybreak. No sooner was it light than we went ashore, and began our preparations for loading our vessel. We were not mistaken in the coldness of the weather, for a white frost was on the ground, a thing we had never seen before in California, and one or two little puddles of fresh water were skimmed over with a thin coat of ice. In this state of the weather and before sunrise, in the grey of the morning, we had to wade off, nearly up to our hips in water, to load the skiff with the wood by armsfull. The third mate remained on board the launch, two more men stayed in the skiff, to load and manage it, and all the water-work, as usual, fell upon the two youngest of us; and there we were, with frost on the ground, wading forward and back, from the beach to the boat, with armsfulls of wood, barefooted, and our trowsers rolled up. When the skiff went off with her load, we could only keep our feet from freezing by racing up and down the beach on the hard sand, as fast as we could go. We were all day at this work, and towards sundown, having loaded the vessel as deep as she would bear, we hove up our anchor, and made sail, beating out the bay. No sooner had we got into the large bay, than we found a strong tide setting us out to seaward, a thick fog which prevented our seeing the ship, and a breeze too light to set us against the tide; for we were as deep as a sand-barge. By the utmost exertions, we saved ourselves from being carried out to sea, and were glad to reach the leewardmost point of the island, where we came-to, and prepared to pass another night, more uncomfortable than the first, for we were loaded up to the gunwale, and had only a choice among logs and sticks for a resting-place. The next morning, we made sail at slack water, with a fair wind, and got on board by eleven o'clock, when all hands were turned-to, to unload and stow away the wood, which took till night.