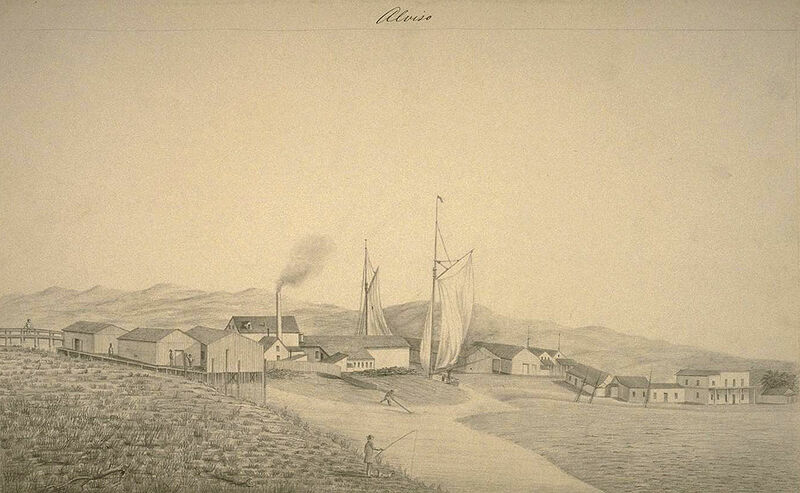 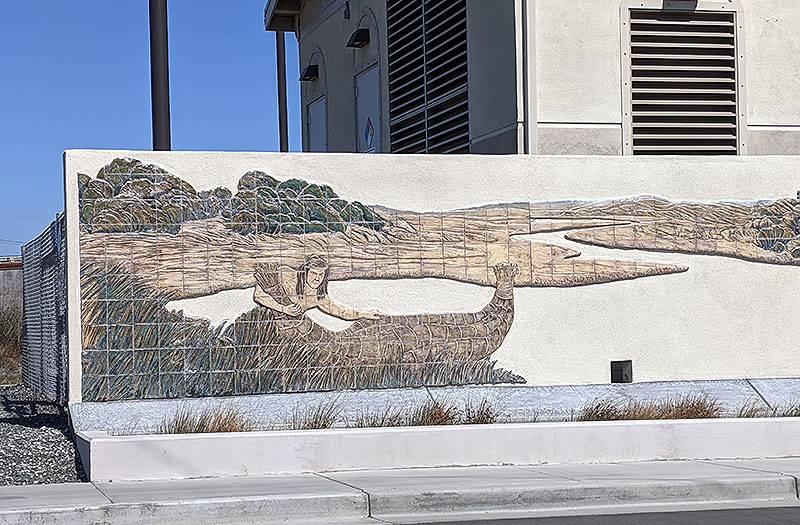 Mosaic mural on side of Alviso pumping station, depicting original inhabitants of area.

First known to the Ohlone Indians, the lands of The Alviso Marina County Park reflect the area’s historic past. In 1838, under Mexican rule the Rancho Rincon de los Esteros was granted to Ignacio Alviso. He provided a dock that became a gateway for boats trading hides, tallow, hay, grain, produce, lumber, and quicksilver from the New Almaden Mines. Later in 1849 the area was surveyed and The Port of Alviso soon exhibited a brisk commerce including travelers principally bound for San Francisco and Sacramento.

The accepted decline of the port began in 1864 with the completion of the San Francisco & San Jose Railroad that bypassed Alviso. In 1871 the narrow gauge South Pacific Coast Railroad reached Alviso but did not lend to the area’s recovery as hydraulic mining conducted in the Sierra foothills had silted the lower San Francisco Bay. In 1890 flooding of the town doomed a sales promotion of residential lots. Thomas Foon Chew created the Bayside Canning Compay in 1906, then the third largest in the world. The cannery closed in 1936 and the port’s silting increased as cannery and agricultural users continued to draw upon the Valley’s aquifer, causing a decrease in the area’s elevation. 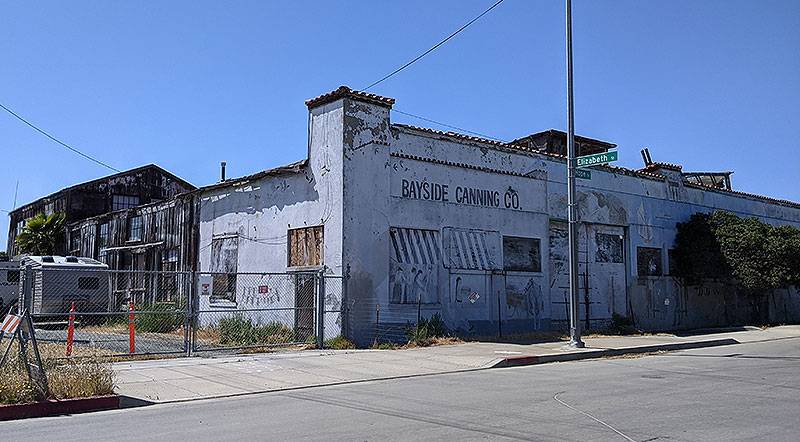 The ruins of the 1906 Bayside Canning Company at the edge of the Alviso Marina County Park, 2021. 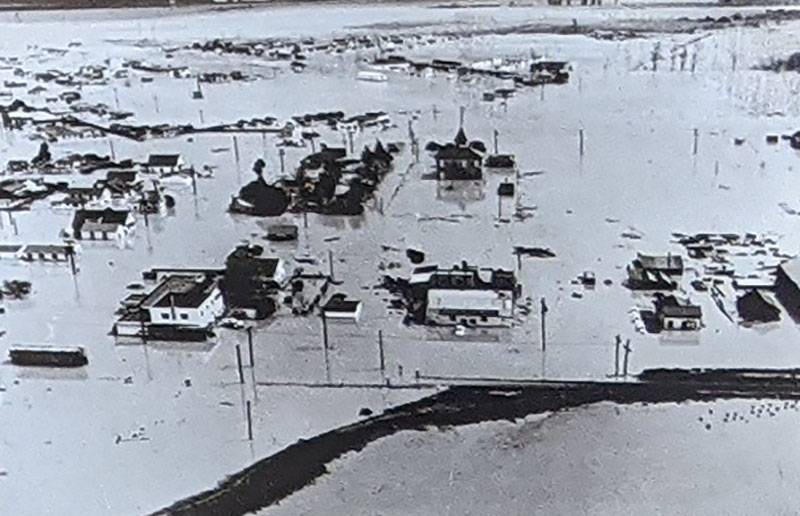 In 1958, Alviso was completely flooded by the storming Guadalupe River and nearby Coyote Creek. 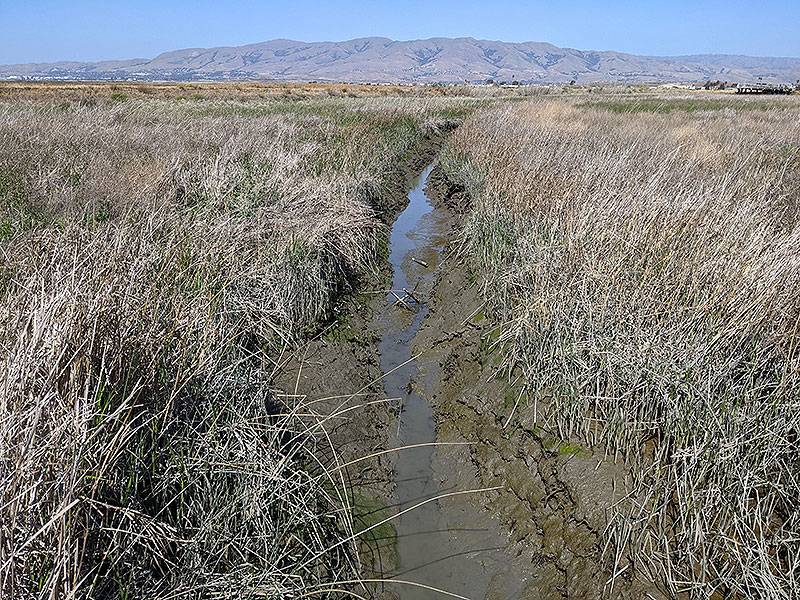 Alviso slough with Mission Peak in the distance, 2021.

Beginning in the 1840s, the dock at Alviso served as Santa Clara County’s access to the San Francisco Bay. From this port, passengers boarded steamboats loaded with goods and produce bound for San Francisco and points beyond. In the early days of the California gold rush, San Jose provided hay, lumber, and large amounts of food though this port.

During the height of its shipping activity, Alviso experienced a devastating maritime disaster. On the eleventh of April 1853, the steamer Jenny Lind left Alviso bound for San Francisco. Midway through the voyage, steam trapped by a torn boiler pipe exploded outward through the ship’s furnace, scalding those who were in its path. Residents of San Jose were stunned, as many of those killed had been leaders in their community, and the incident is still remembered as a major tragedy. 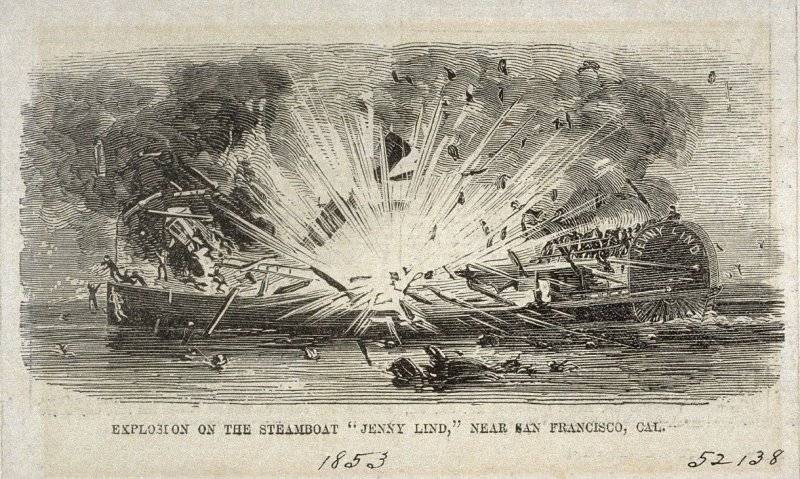 Explosion of the Jenny Lind 1853

Soon after, business at the Port of Alviso began to suffer. The completion of the San Francisco-San Jose Railroad in 1864 diverted most of the passenger traffic from Alviso and hastened the port’s decline. Although Alviso’s commercial prominence faded, its past is forever linked to the history of the ill-fated steamer, Jenny Lind.