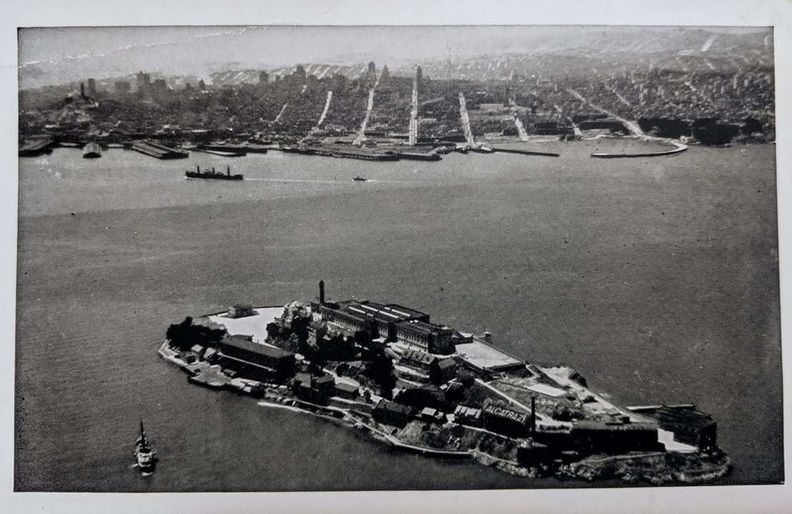 Alcatraz island from the San Francisco side.

The Miwok Indians have always considered Alcatraz, the barren sandstone rock in San Francisco Bay, inhabited by evil spirits. They must have been petrified with fear when the U.S. Army brought them to the rock in chains and shackles in 1859, the first year that Alcatraz was used as a prison. The rock served as a military prison throughout the 19th century. Beginning in 1907, prisoners were put to work building what was then the largest reinforced concrete structure in the world. When it was completed in 1912, the workers who built it became its first inmates.

The Federal Bureau of Prisons took over in 1933 and installed a higher class of criminal----people like Machine Gun Kelly, Birdman Stroud, and Al Capone. Life on "The Rock" included the dubious pleasures of watching luxury liners cruise off to ports unknown, the lights of the San Francisco skyline twinkling invitingly--while inmates spent anywhere from 19 to 24 hours a day in a five-by-nine-foot cell. On some nights inmates could hear the wealthy partying at the St. Francis Yacht Club across the bay, their happy shouts punctuated by the tinkle of feminine laughter. Little wonder that suicides and murders were a regular occurrence.

One of the worst incidents was an attempted escape in May, 1946 that turned into a bloody standoff and left three men dead. The Block C unit where the inmates died is believed by some National Park employees to be haunted; strange clanging noises break out at night from the empty corridor, but stop as soon as the watchman opens the door. Cell blocks A and B, too, have had their share of weird incidents. Employees have heard mysterious screams, running footsteps, and loud crashing sounds there. 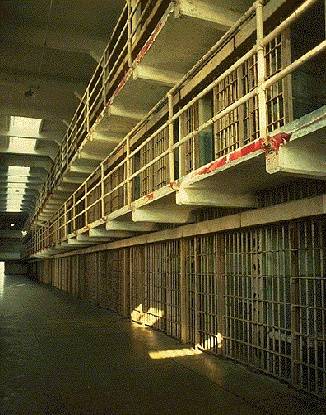 The most notorious "haunted cell" is 14-D, one of the notorious "holes" where rebellious inmates were confined in total isolation. 14-D is permeated by a perpetual chill. One inmate, Rufe McCain, was confined here for over three years after an escape attempt. Shortly after being released from the hole, he stabbed another inmate to death, and was acquitted--on the ground that cell 14-D had done irreparable damage to his psyche.

In 1984, Ranger and night watchman Rex Norman was awakened by the sound of a weighty steel door swinging wildly in Cell Block C. The sound stopped when he got there, but began again the next night, and the next...

So on September 10th, 1984, the Park system brought psychic Sylvia Brown to Alcatraz, accompanied by a CBS news team. Brown identified the troublemaking ghost as "Butcher" Malkowitz, a hit man who had been killed by another prisoner in the laundry room. During a seance, Brown tried to convince the Butcher's ghost to leave the prison, but the ghost refused. But even if the Butcher does finally up and leave, Alcatraz will undoubtedly remain what the Indians always said it was: an island of evil spirits.