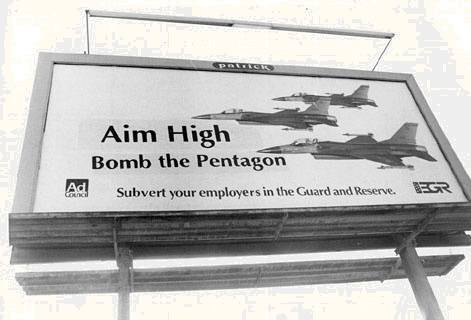 Once upon a time there were 5 tree planters from a local cooperative who, having worked very hard, took a vacation in Seattle. They saw a billboard which had a very phallic jet aircraft torquing across the sign with the caption "Aim High." So they did.

People went onto the board, measured and got color samples. They pasted red painted letters onto white butcher paper, got squeegees and other gear, and one evening rush hour they posted a person at one end of the freeway bridge next to the board, and another near an on-ramp in the opposite direction; all armed with walkie-talkies. The others wheat-pasted the paper onto the sign.

Most observers were amused; the others were much more emphatic, even hostile. One father-son team got out and demanded that the crew "COME DOWN HERE RIGHT NOW!!!" The young vandals explained that they just had a job to do and ignored these "Love it or Leave It" types. The traffic flow soon compelled the all-American duo to leave; indeed, it was so heavy that even with immediate warning -- had cellular phones been invented -- the cops would have taken minutes to arrive.

Within 15 minutes the sign was corrected and our heroes departed, leaving their spattered overalls and equipment in a friend's boat, which was anchored in one of the city's canals.

To celebrate they sought out a local bar, whose tinted windows turned out to have a commanding view of the scene of the crime. As they entered it was clear that virtually everyone had watched them; they were fingered ... and the room broke into cheers.

They had relaxed for perhaps 20 minutes when the police arrived like gangbusters, looking for people to assist them in their inquiries. As nobody had seen a thing, the cops left.

By noon the board had been covered with the same sign. It looked great ... until the next winter rain, when the added letters ghosted through the wet paper: next to "Aim High" were the words "Blow Up The Pentagon!"