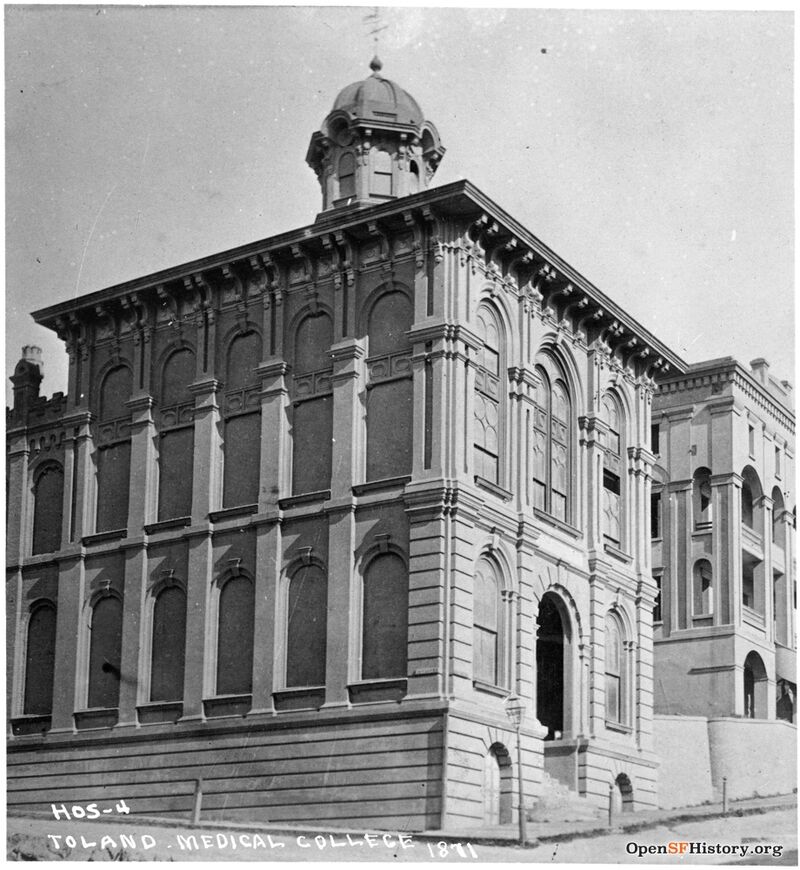 It looms large in the background of many an image taken from Strawberry Hill or in the Inner Sunset District. The large building on the northern slope of Mt. Sutro was the culmination of years of efforts to bring the best and latest medical knowledge to the growing metropolis of San Francisco. What began in several places in the downtown area was brought together in a then state-of-the-art facility known as the Affiliated Colleges.

In 1852, Hugh Toland, a 46-year-old respected doctor, left his home in Missouri with his family to come to California, like many a man, to seek his fortune. After a few weeks working a quartz mill though, Toland’s wife died, and he moved on to San Francisco to return to medicine. In the City, Toland’s wide-ranging medical practice thrived. Wishing to leave a legacy, Toland purchased land at Stockton and Francisco in the North Beach area next to the City and County Hospital to build a medical school. In 1864, the Toland Medical College opened. The first class had eight students.

In 1868, the first state university opened across the Bay in Berkeley. Within a few years, Toland began talking with the university about making his College a part of the university. The talks culminated with the Toland Medical College trustees deeding the College to the UC Regents in 1873 becoming the first affiliated college in the UC system. A few months later, the California College of Pharmacy, which had just opened in 1872 at 859 Market Street, became the second affiliated college in the system. In 1881, a third affiliated college was created when a College of Dentistry was opened at Toland Hall.

1883, the College of Pharmacy, in need of larger space, built a three-story building at 113 Fulton Street and moved in. As classes grew larger at the Medical and Dental Colleges in Toland Hall, space became limited. Therefore, in 1891, the College of Dentistry moved to the Donohoe Building at Market and Taylor. Nonethless, Toland Hall’s limitations were not keeping up with the rapidly changing medical field and the Affiliated Colleges began appealing to the UC Regents for money to build a new home. 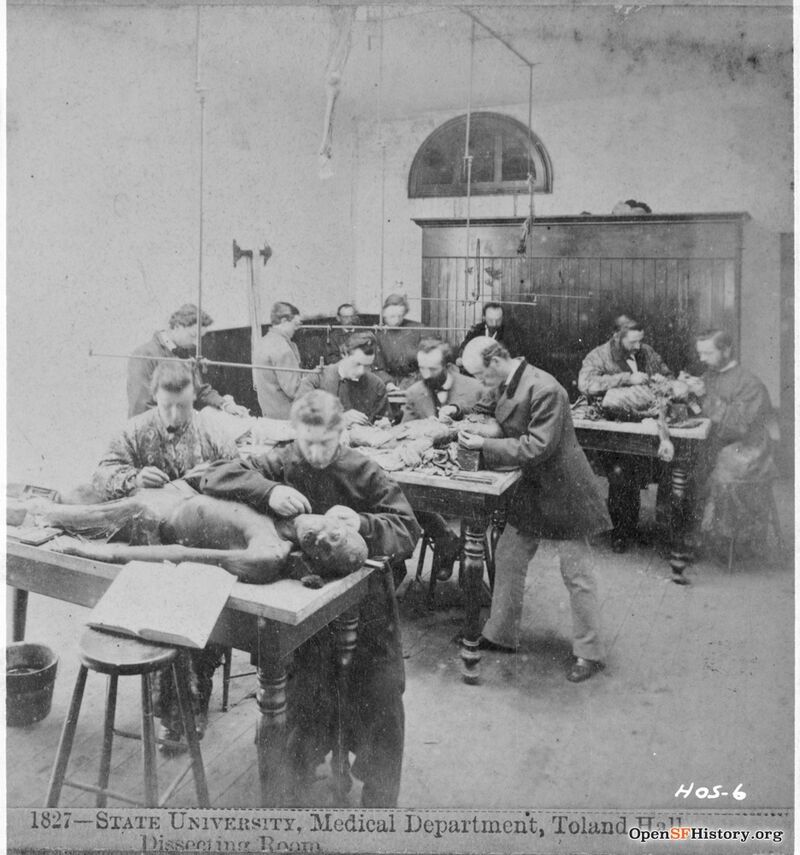 After several years of lobbying the legislature, the UC Regents got approval for $250,000 for the construction of a new campus. The question of where to build was eventually solved by then Mayor Adolph Sutro’s 1895 donation of 13 acres on the slopes of what was then known as Mount Parnassus. Five years later, the new Affiliated Colleges buildings opened. The Medical Department moved in by October 1898, followed a few months later by the College of Pharmacy. 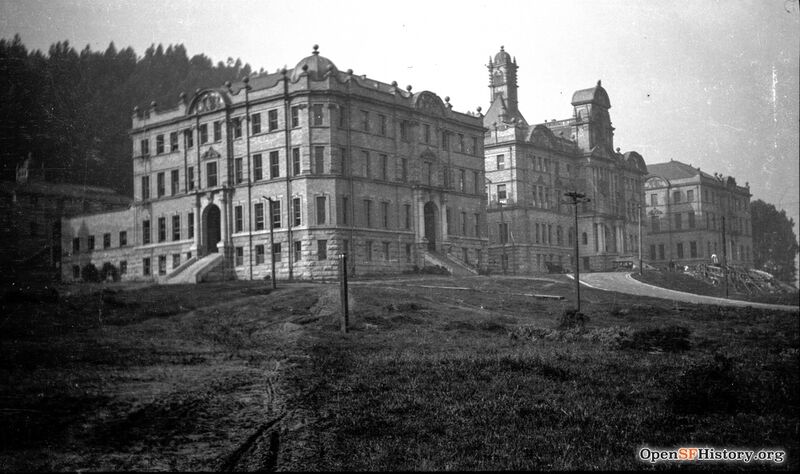 The new Affiliated Colleges buildings featured a large auditorium, lecture halls, large labs for various sciences, a dissection room, library, classrooms, study rooms, and faculty and staff offices. While the College of Dentistry remained at the Donohoe Building, the new buildings had specialized dental labs for their use. The Affiliated Colleges began recruiting top researchers and scientists while maintaining its status as a top teaching hospital.

As with most San Francisco histories, April 18, 1906 brought change. Before the earthquake and fire, the Affiliated Colleges were on the outskirts of where much of the City’s populace resided. Afterwards, thousands of refugees were forced into temporary shelters in City parks, including large encampments in nearby Golden Gate Park. The Affiliated College buildings survived the earthquake with only modest damage and were never threatened by the fires. However, the College of Dentistry facilities in the Donohoe Building were largely destroyed. The rest of the academic year was canceled. 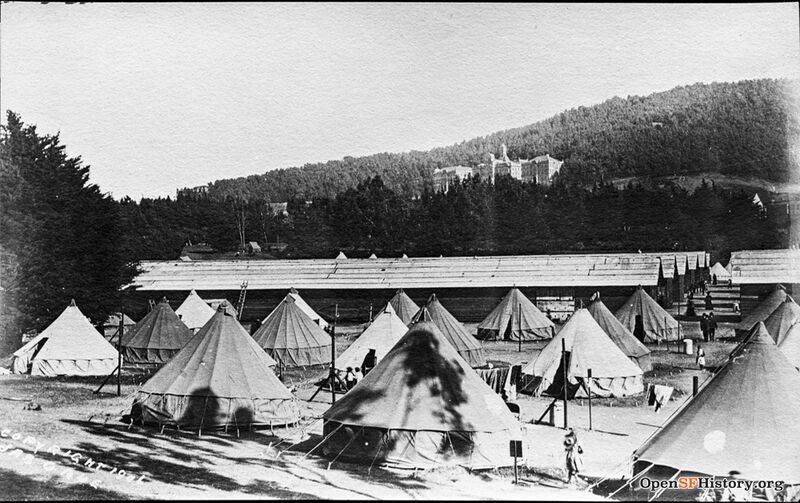 When the Affiliated Colleges reopened in the Fall of 1906, quarters were a little more cramped with the College of Dentistry now housed on the campus. It shared the easternmost building with the College of Pharmacy, which caused some interdepartmental issues. A few of the research-oriented departments were transferred to Berkeley so that the Parnassus campus could concentrate on clinical labs. The biggest changes were the conversion of one of the buildings to a full-fledged hospital and the addition of a nursing school in 1907.

Despite the hospital conversion, the facilities were merely adequate and plans began for a new hospital facility. $750,000 in private funds were raised for this purpose. The new UC Medical Center opened in August 1917 on the other side of Parnassus from the Affiliated Colleges buildings. After World War II, an additional teaching hospital and a Medical Sciences building were added to the campus. In 1949, the UC Regents re-consolidated all medical departments at the Parnassus campus. The Parnassus campus was renamed the UC Medical Center and the medical school was no longer “affiliated,” but was officially the UC School of Medicine. 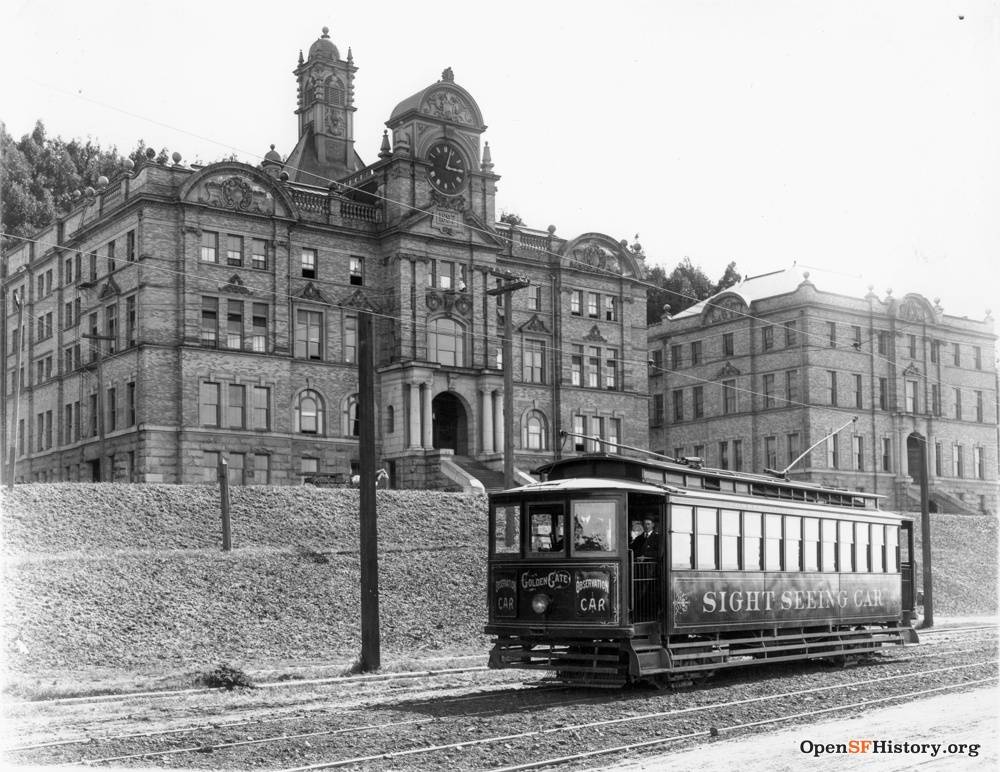 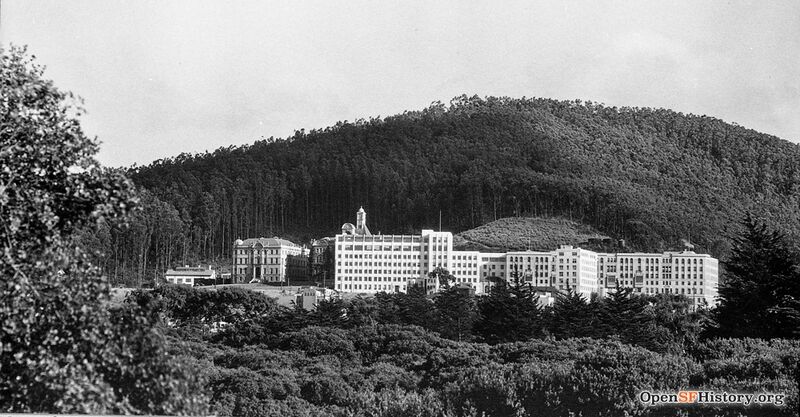 UC Medical Center with Affiliated Colleges buildings behind it, circa 1930. 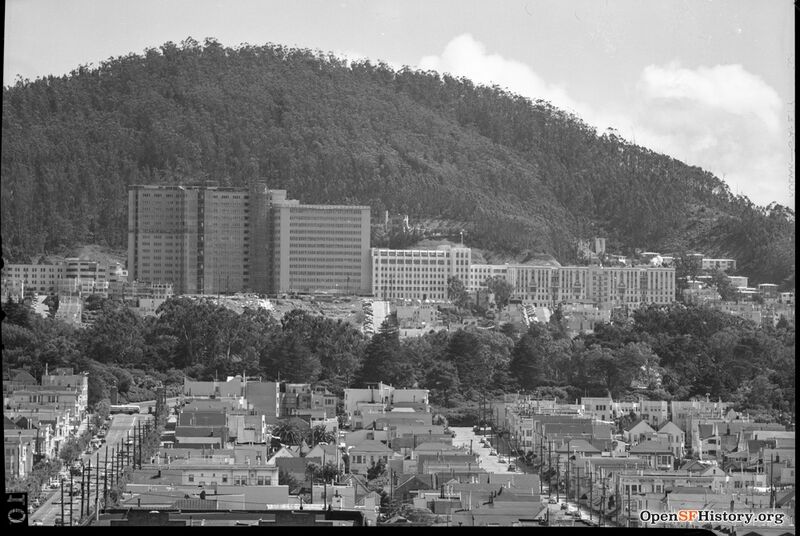 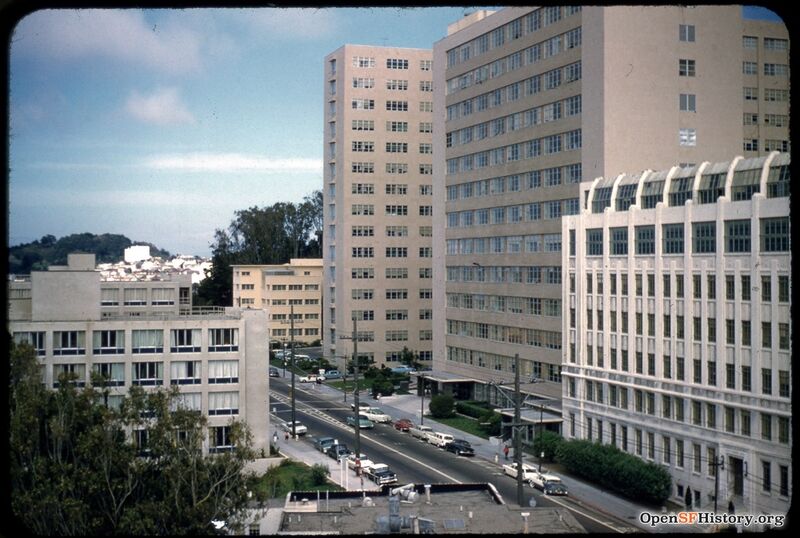 You can find a far more detailed history of the Affiliated Colleges on the UCSF website. We also did an Outside Lands Podcast on the campus several years ago. Today, the UCSF Medical Center remains one of the foremost medical education and hospital facilities in the world. As San Francisco has grown around it, the Parnassus campus is not as prominent today as it once was in many images, but it can still be seen from many places.