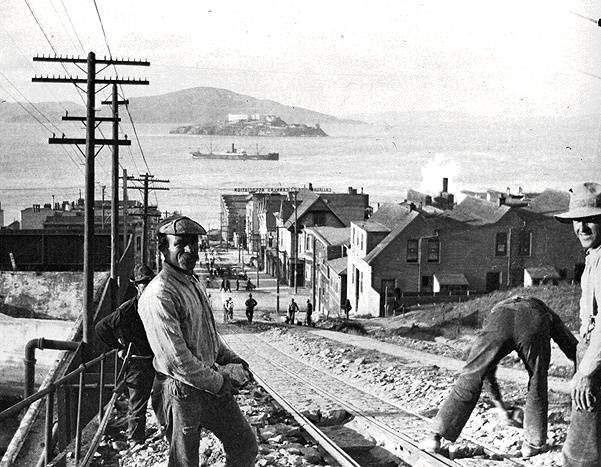 His father gives him the money to come to America. Got on the train, he said, "I didn't know how big America was. I had a can of tomatoes and a big piece of bread and a salami to last me the whole way, and about 50 cents." You know, it was one of those immigrant stories. He went to see his brother who was working in Pueblo, Colorado at a big steel plant there. He didn't like Pueblo because the air was filthy, he was used to clean air, he liked to be outdoors, he didn't like working in the steel mill, so he left there and went to the coal fields of southern Colorado. This is about 1914.

He is there just in time for the famous Ludlow Massacre where basically the Industrial Workers of the World took on the Rockefellers. And he said, "trains used to come into town loaded with scabs, and the conductors were union people, and if they beeped the whistle twice, then we knew the scabs were in the second car. And so we used to go beat the shit out of them and chase them out of town." And they did that enough that eventually the army came into town and blew them away. In a very very bitter struggle that I'm not going to make light of at all, they basically destroyed the housing that the miners had set up for themselves, they killed scores of miners, drove them out into the snow. That was the end of that strike.

So Archie wanders around Colorado for a while, works in the hard rock mines in the north, changes his name because he's known to all the mine owners as a bad person. This is not a deeply political person, by the way, this is just a regular guy. And winds up in San Francisco because his wife who he met in Colorado had a sister here. Winds up working on the San Francisco waterfront. They had a company union then, it was basically a union formed for the purpose of keeping the men in line. You had to join it if you wanted to work. Archie wanted to work. He was a worker, a guy who wanted to work, to do a good job, to make a decent living. He shows up at the Fink Hall one day, he had had a problem because he had an IWW book in his back pocket and he lost it one day and so it became public knowledge that he was a bad person. He had a reputation as a good worker. So he goes down to the Fink Hall and tries to join, here's this one little bodyguard. So Archie says I need to see the president of the union, I need to join so I can get steady work. He says, "Nah, ya can't go see 'im." So Archie says, "I just knocked this guy over," because he had letters from the employers, he was allowed to join. "And I says, I kept looking at this guy, this bodyguard, I said "Don't I know you? Nah, ... wait a minute! I realized he was a sergeant in the National Guard for Ludlow, Colorado."

He is telling me about a 50 year unbroken thread of history and human experience. This guy was not radical by any means. His son, who later became a union official, was part of that right wing [Catholic] opposition to Harry Bridges in the union, but he was a good union person, a good worker, and a good guy. The ILWU was filled with people like this, whose stories went back really into the 19th century, who had had experiences that in themselves were not a big deal. This guy's final story he told me was fighting off the police on July 5, 1934 with somebody named Hernandez whom he'd just met. He said, "He's got his back to me, we're back to back with 2x4s swinging at the cops. It's like the mines all over again."