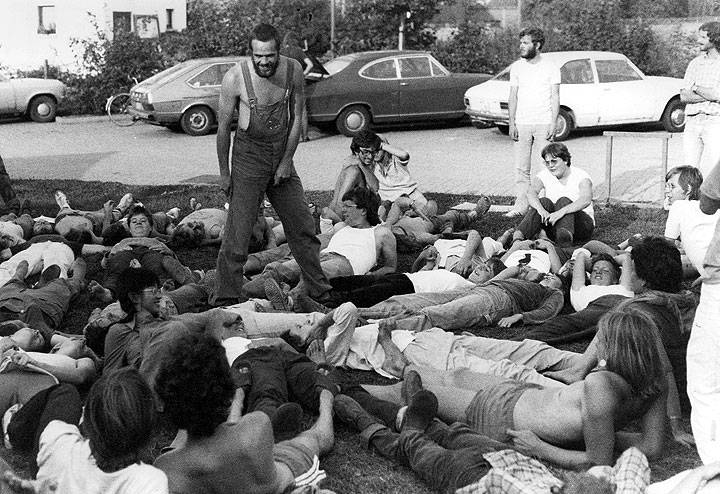 The Abalone Alliance has historically been a direct action group. But internal rumblings suggest that the Abalone is in transition; that it must let out its seams if it is to avoid obsolescence. In this article, It's About Times interviews some longtime Abalone activists who have attempted diverse and sometimes controversial alternatives to direct action.

Digression from the direct action mode comes in a wide variety of packaging. "Coalitioning," says Larry Goldberg of the Redwood Alliance in Humboldt County, "is the name of the game for the eighties."

The Redwood Alliance, however, is not involved in traditional coalition building with minorities and labor so much as in using the electoral and 'legal systems for what might be termed "creative lobbying." Recently, the Redwood Alliance succeeded in electing both an antinuclear city council and a representative to the board of supervisors in the city of Arcata. "We passed the first anti-nuclear initiative in a city election in the state of California," Goldberg emphasizes.

This strategy and style of politics has evoked considerable static from other member groups in the Abalone Alliance. "We've been dumped on by many groups who think it's inappropriate for us to be working within the system. They think we should utilize only direct action,” Goldberg complains.

Mary Moore, an active member of SONOMore Atomics and founder of the Bohemian Grove Action Network, disagrees with Goldberg's analysis of the problem but agrees that diverse politics are necessary for any growing movement. "We are a direct action group," Moore says. "That is the premise the Abalone was founded on and we need to use our limited finances for their designated purpose."

Moore believes that what the antinuclear movement needs most is a common political analysis and that the major obstacle to coalition building is "what to focus on once we're all holding hands. That," she says, "is where things begin to break down." 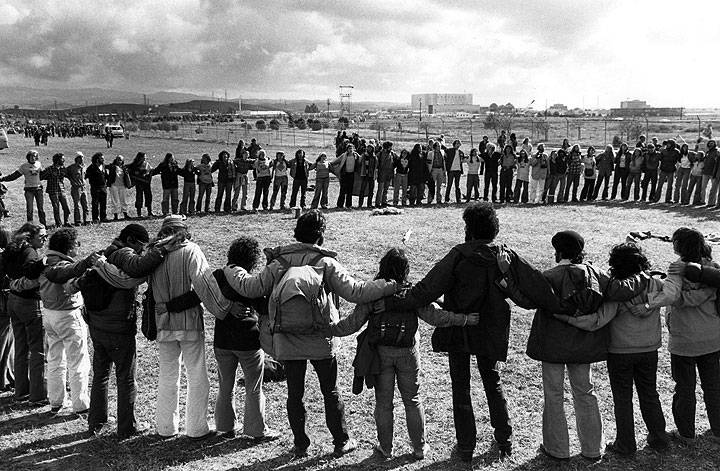 Recently, Moore worked on the committee to elect Tom Bradley governor of California; despite the fact that the governor's race is hardly direct action and that Bradley has shown little interest in the antinuclear cause. She explained that after years of working among antinukers who showed little awareness of racism and sexism, "it wasn't that difficult for me to go into an arena where people aren't sensitive to the antinuclear focus."

Susan Swift, former staffperson in Abalone's statewide office, agrees with Moore that the movement needs a common analysis but sees the Abalone Alliance as "an extraordinarily middle class group of people" that "appeals only to the 'peace-love' aspect in people's personalities."

Swift said she would like to see more contact between the antinuclear movement and labor and minorities. But "you can't just decide to build a coalition and send out flyers to other organizations, without sharing in their cause or their needs."

Swift's efforts at coalition building have focused mainly around an attempt to rejuvenate the Abalone Alliance labor collective. She found the experience discouraging. "There was just not enough interest to maintain a statewide collective. Part of the problem is that many people on the left have lost faith in labor unions as a progressive force."

Swift believes that labor unions are a critical part of the movement, and that local unions are especially open to antinuclear arguments. "There is a great deal of interest in the antinuclear issue, even' among workers whose industries are affected. They are aware of the dangers, and they know that capital intensive technologies like those in nuclear weapons production erodes the job market."

Like Goldberg, Swift has become frustrated with the limitations of the Abalone Alliance. But she sees these limitations differently. Goldberg contends that "the problem with the Abalone, is their ideologues” and that the antinuclear alliance is “too rooted in revolutionary leftist politics." Swift, to the contrary, believes that "socialism, without the rhetoric, appeals to most everyone. "

Swift feels that people need a means to express their opposition which the Abalone Alliance does not provide. "If we continue appealing only to the people who can afford the time to participate in civil disobedience, the movement will continue to dwindle. We need to stop being a fringe group or there will never be any common understanding of what's going on or why," she says.

"The Abalone Alliance relies too much on the impression that people will change once they are shown the facts. But most people are interested in their own personal survival, which means you have to address the question of jobs,” Swift says. She is now rearranging her priorities to include racially integrated political groups outside the Abalone Alliance.

Moore's work might afford the Susan Swifts of the movement some consolation. Moore is one of the few to successfully bridge the gap between blacks and the predominantly white antinuclear movement. Last year she worked with blacks in Sonoma County around Martin Luther King Day. The coalition eventually broke down over "cultural differences" (the vegetarian Abalones had a real problem with the fried chicken). "But now," says Moore, "we at least have an open line with the black community."

Moore, who claims to like fried chicken, says she still gets together with people from the MLK coalition every other month. "There's an awareness on both sides of the connectedness," she explained. "And basically that's what coalitioning is all about."

Though "coalitioning" is a consistent theme in discussions about the future of the Abalone Alliance, its implications are far from consistent. While Goldberg finds the "leftist politics" of the Abalone a major source of frustration, Swift and Moore 'see the problem as one of middle class values and insularity.

Moore finds the Nuclear Freeze Initiative, for example, to be based on a very shallow premise. "It's not that I’m against the Freeze," she emphasizes. "It's the limitations of the Freeze that bother me. The 'Caldicott hysterical, approach' has absolutely no political analysis. It's as if weapons came right out of a vacuum." Moore hopes that this is one trap into which the antinuclear movement won't fall.

"The bottom line," Moore adds, "is that all of us" who are working in progressive politics have a lot in common. In terms of meaningful survival, there's a handful of' white men who are profiting off our miseries and it's time for us to get together and take a stand."

However different their political approaches, Swift, Moore and Goldberg agree on at least one thing: that, as Goldberg puts it, "The only way to accomplish the larger goal [of the antinuclear movement] is to involve labor, minorities, housewives -- the people."

But neither Goldberg's theory of “narrow leftist politics” nor Swift’s suggestion that the movement is firmly entrenched in middle class mores seems to address the complexity of the situation. A more comprehensive analysis is warranted or Swift's speculation that "the Abalone may have outlived its purpose" may become a self-fulfilling prophecy.

With the future of the antinuclear movement in mind, it is time to begin looking at some more difficult questions: Just what is the movement's political analysis? Who are "the people?" And how exactly do we go about involving them? Can we assume, for instance, that "workers" are more- interested in their jobs than in the quality of their lives? And why must they be forced to choose? Are antinuclear activists, mostly workers themselves, so different from the labor union members sought after for coalitioning? And as long as we're having a collective identity crisis, we might as well try to figure out just who we are and what kind of world we want to create. Continuing to base our politics on "survival" is a pretty narrow vision.

The realization of a broad coalition and the possibility of a future worth looking forward to will require some serious political and priority analysis. In light of its many internal conflicts, the antinuclear movement may need to reevaluate its attitudes and policies. The challenge of the eighties will require the antinuclear movement to start applying its old savvy to new personal and political strategies.