This account was written by Charles Warren Stoddard one of the early poets of San Francisco. Stoddard arrived from Rochester, New York, at the age of eleven in 1854. This excerpt is from the 1912 edition of "In the Footprints of the Padres." In this slightly romanticized piece, Stoddard recounts one of his first visits (1854) to ethnic neighborhoods, namely the Hispanic and Chinese ones.

We had been but a few days in San Francisco when a new-found friend, scarcely my senior, but who was a comparatively old settler, took me by the hand and led me forth to view the town. He was my neighbor, and a right good fellow, with the surprising composure-for one of his years-that is so early, so easily, and so naturally acquired by those living in camps and border-lands.

We descended Telegraph Hill by Dupont Street [Grant Avenue] as far as Pacific Street. So steep was the way that, at intervals, the modern fire-escape would have been a welcome aid to our progress. Sidewalks, always of plank and often not broader than two boards placed longitudinally, led on to steps that plunged headlong from one terrace to another. From the veranda of one house one might have leaped to the roof of the house just below--if so disposed--for the houses seemed to be set one upon another, so acute was the angle of their base-line. The town stood on end just there, and at the foot of it was a foreign quarter.

In those days there were at least four foreign quarters-Spanish, French, Italian, and Chinese. We knew the Spanish Quarter at the foot of the hill by the human types that inhabited it; by the balconies like hanging gardens, clamorous with parrots; and by the dark-eyed señoritas, with lace mantillas drawn over their blue-black hair; by the shop windows filled with Mexican pottery; the long strings of cardinal-red peppers that swung under the awnings over the doors of the sellers of spicy things; and also by the delicious odors that were wafted to us from the tables where Mexicans, Spaniards, Chileans, Peruvians, and Hispano-Americans were discussing the steaming tamal, the fragrant frijol, and other fiery dishes that might put to the blush the ineffectual pepper-pot.

Everywhere we heard the most mellifluous of languages-the "lovely lingo," we used to call it; everywhere we saw the people of the quarter lounging in doorways or windows or on galleries, dressed as if they were about to appear in a rendition of the opera of "The Barber of Seville, or at a fancy-dress ball. Figaros were on every hand, and Rosinas and Dons of all degrees. At times a magnificent Caballero dashed by on a half-tamed bronco. He rode in the shade of a sombrero a yard wide, crusted with silver embroidery. His Mexican saddle was embossed with huge Mexican dollars; his jacket gaily ornamented as a bull-fighter's; his trousers open from the hip, and with a chain of silver buttons down their flapping hems; his spurs, huge wheels with murderous spikes, were fringed with little bells that jangled as he rode--and this to the accompaniment of much strumming of guitars and the incense of cigarros.

Near the Spanish Quarter ran the Barbary Coast. There were the dives beneath the pavement, where it was not wise to enter; blood was on those thresholds, and within hovered the shadow of death. Beyond, we entered Chinatown, as rare a bit of old China as is to be found without the Great Wall itself. Chinatown has grown amazingly within the last forty years, but it has in reality gained little of interest. There is more of it: that is the only difference; and what there is of it is more difficult to approach. The Joss House, the theatre, with its great original "continuous performance"--its tragedy half a year in length--flourished there. The glittering, spectacular restaurant was wide open to the public, and so was everything else. That fact made all the difference between Chinatown in the Fifties and Chinatown forty years later. 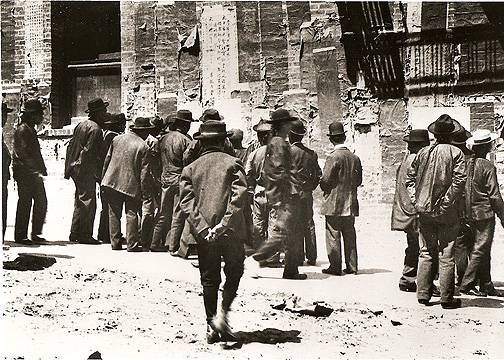 Chinese get the news about a peace pact between the Hop Sing and Bing Kong tongs, c. 1875.

My companion and I tarried long on Dupont Street, between Pacific and Sacramento Streets. The shops were like peep shows on a larger scale. How bright they were! How gay with color! How rich with carvings and curios. Each was like a set-scene on the stage. The shopkeepers and their aids were like actors in a play. They seemed really to be playing and not trying to engage in any serious business. Surely it would have been quite beneath the dignity of such distinguished gentlemen to take the smallest interest in the affairs of trade. They were clad in silks and satins and furs of great value; they had a little fingernail as long as a slice of quill pen; they had tea on tables of carved teak; and they had impossible pipes that breathed unspeakable odors. They wore bracelets of priceless jade. They had private boxes, which hung from the ceiling and looked like cages for some unclassified bird; and they could go up into those boxes when life at the tea-table became tiresome, and get quite another point of view. There they could look down upon the world of traffic that never did anything in their shops, as far as we could see; and, still murmuring to themselves in a tongue that sounds untranslatable and a voice that was never known to rise above a stage whisper, they could at one and the same moment regard with scorn the Christian, keep an eye on the cash-boy, and make perfect pictures of themselves.

In some parts of that strange street, where everybody was very busy but apparently never accomplished anything, there were no fronts to the rooms on the ground floor. If those rooms were ever closed-it seemed to me they never were, some one kindly put up a long row of shutters, and that end was accomplished. When the shutters were down the whole place was wide open, and anybody, everybody, could enter and depart at his own sweet will. This is exactly what he did; we did it ourselves, but we didn't know why we did it. The others seemed to know all about it.

There was a long table in the centre of each room; it was always surrounded by swarms of Chinamen. Not a few foreigners of various nationalities were there. They were all intensely interested in some game that was being played upon the table. We heard the "chink" of money; and as the players came and went some were glad and some were sad and some were mad. These were the gambling halls of Chinatown. They were not at all beautiful or alluring to the eye, but they cast a spell over the minds and the pockets of men that was irresistible. Nowadays the place is kept under lock and key, and you must give the countersign or you will be turned away from the door thereof by a Chinaman whose face is the image of injured innocence.