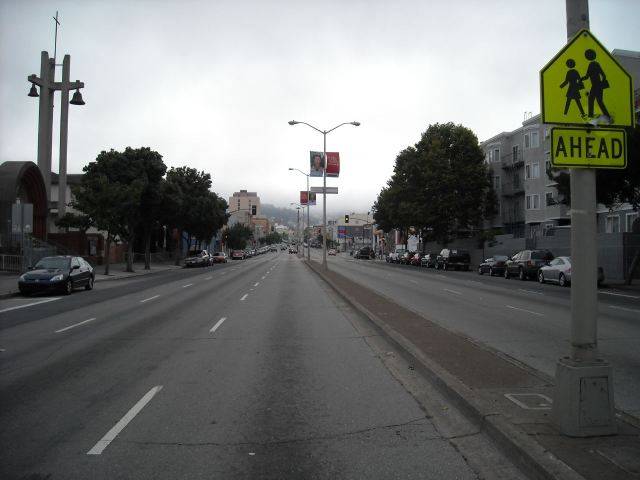 The photo above (Thanks Mark!) shows a view of Cesar Chavez Boulevard looking west from Folsom in 2008, a few years before the current/ongoing sewer and streetscape improvement project got underway. As you can see, it is very unlovely.

Cesar Chavez — formerly Army Street — WAS designed to be a highway. Sort of. The wide thoroughfare as we now know it was carved out in the 1930s and 1940s, with the intention of using the road as a major east-west route to carry automobile traffic, first to the US101 Bayshore Freeway (which was built in the early 1950s), and eventually to the Southern Crossing, a second transbay bridge that was planned to terminate in the area around Army/Chavez and Third Street.

Wait. A second transbay bridge??? At the foot of Army/Chavez?? WHAT??!!

Follow along as we take a quick survey of Army Street history, give-or take a few years here and there:

1859: Here, Precita Creek runs unfettered down the present-day Cesar Chavez Boulevard corridor, providing a primary route for water drainage for the eastern slopes of Twin Peaks. It also functions as a sewer. Present-day Precita Avenue shadows the route of the former Precita Creek. Army Street not created yet, but Navy Street ran parallel: 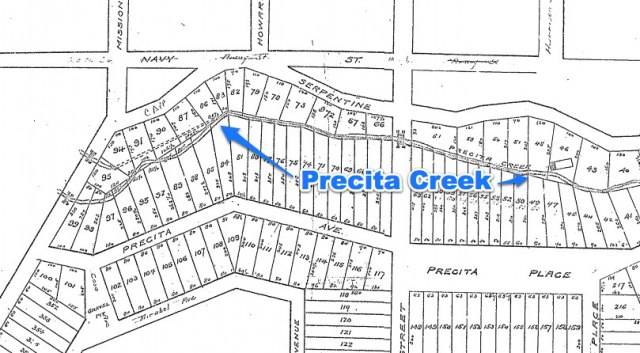 1888: Precita Creek still a creek. Army street is a jankey east-west road that runs alongside it: 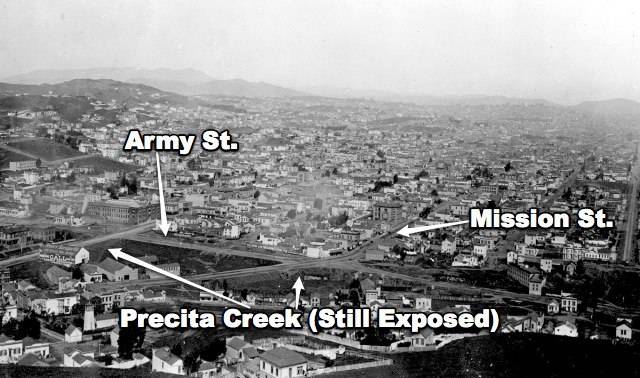 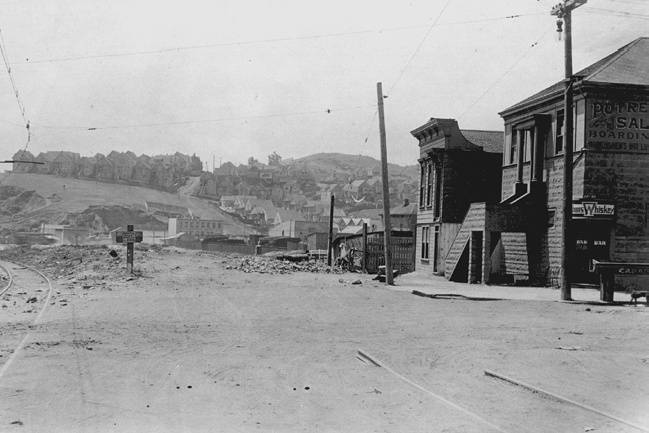 Looking south towards Bernal Heights from 25th and Potrero, c. 1912 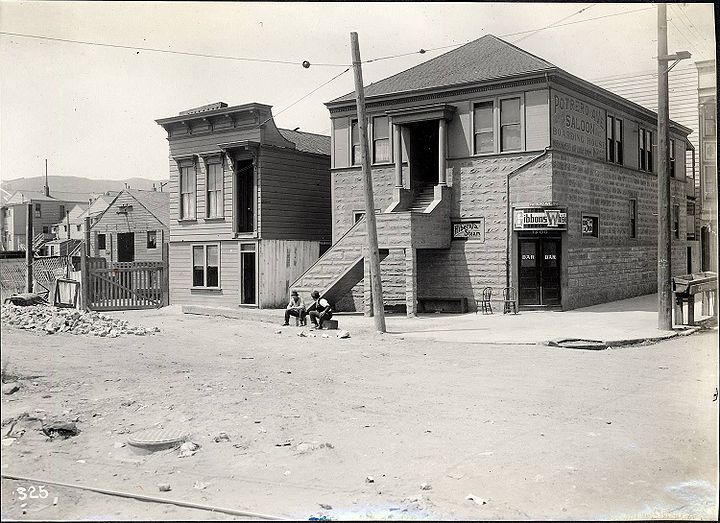 1931: Check out this amazing view of Army Street, looking west from Harrison, when it was a relatively normal San Francisco City Street (with a streetcar line!). That’s Le Conte Elementary School (now, Leonard Flynn) on the left, with the St. Anthony’s church steeple behind it. The church burned in the 1970s. 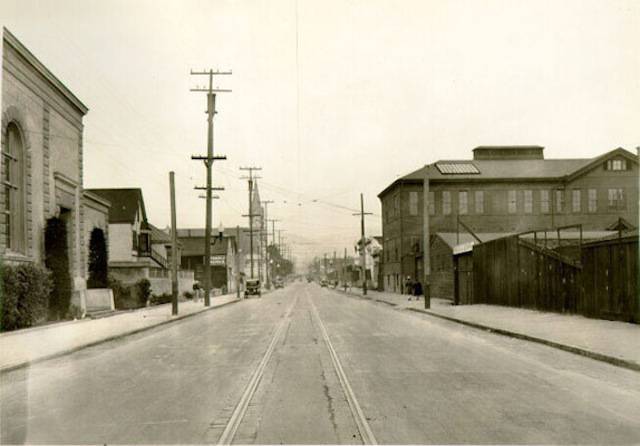 Late 1930s: Army Street widened from a normal 4-lane city street to an 8-lane surface throroughfare. This is why many of the houses on the street are so close to the curb, with no front yards. Eminent domain is a bitch.

1940: View west on Army at Harrison again, showing both widened and unwidened portions. The caption on this photo hopes “the city soon may have the money to finish the widening.” Good times. 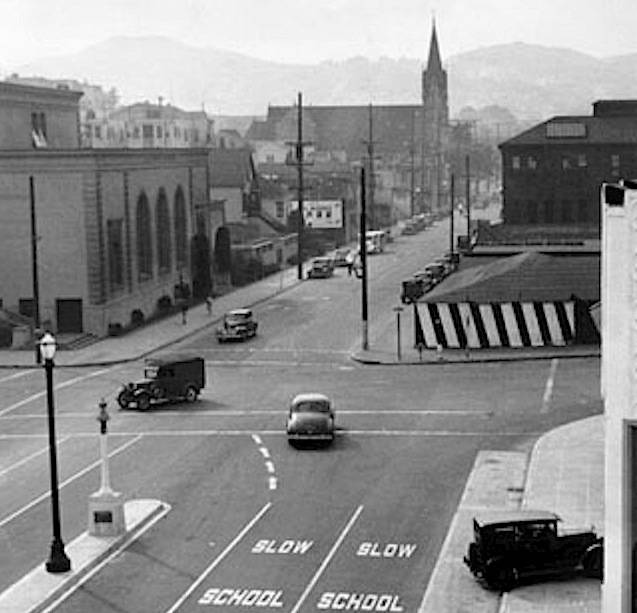 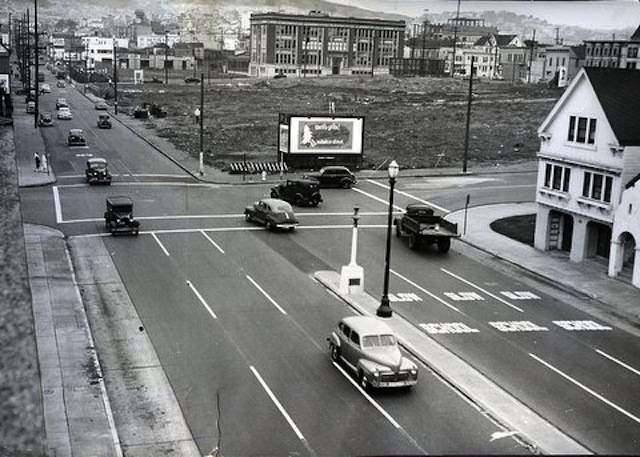 Army Street at Harrison, during the street widening process, apx. 1940. Looks to me like Army at Harrison, shortly after the properties on the north side of Army were condemned and removed. (This block then became a rather notorious public housing project.) I believe the building visible just to the left and behind the (now-demolished) school-like building is the northwest corner of Army and Shotwell.

1947: Here’s a view looking south from Potrero Avenue at the Army Street intersection. That’s Bernal Heights in the top right, with the stairs leading up to Holladay. The US-101 freeway was built here 10 years later. 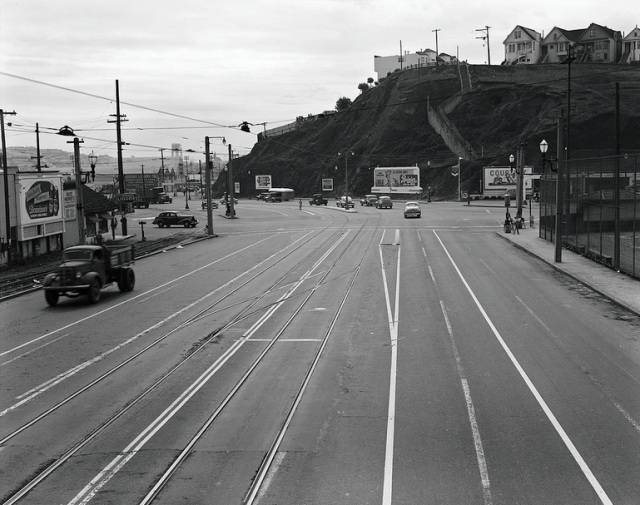 1948: A Southern Crossing was envisioned as part of an urban freeway network that would have encircled Bernal Heights in a maze of concrete viaducts, including one that followed Mission Street: 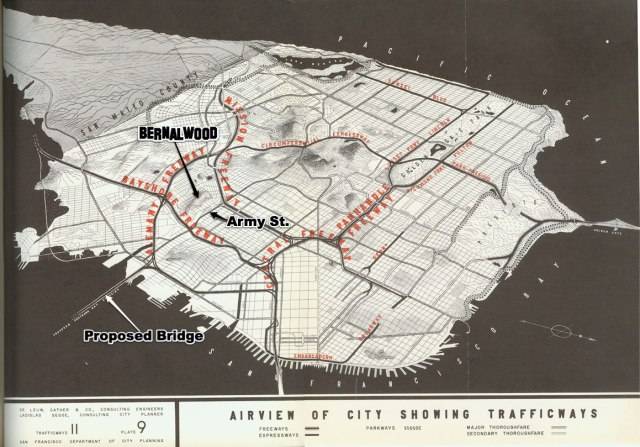 This scenario is so grim that we must zoom and enhance to see how bleak it really was (while also admiring the map’s realistic attention to geographic detail). Note the Army Street interchange on the proposed Mission Freeway, at the western end of Precita Avenue. Oh my: 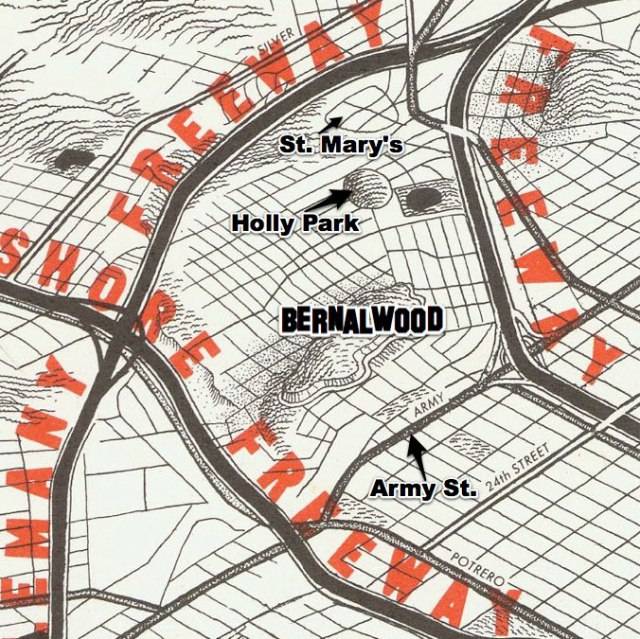 1948: Here’s another view of the City’s proposed freeway network, showing more clearly how Army Street would have played an important role as an east-west artery to the Southern Crossing (and how thoroughly all of this would have sucked for Bernal Heights): 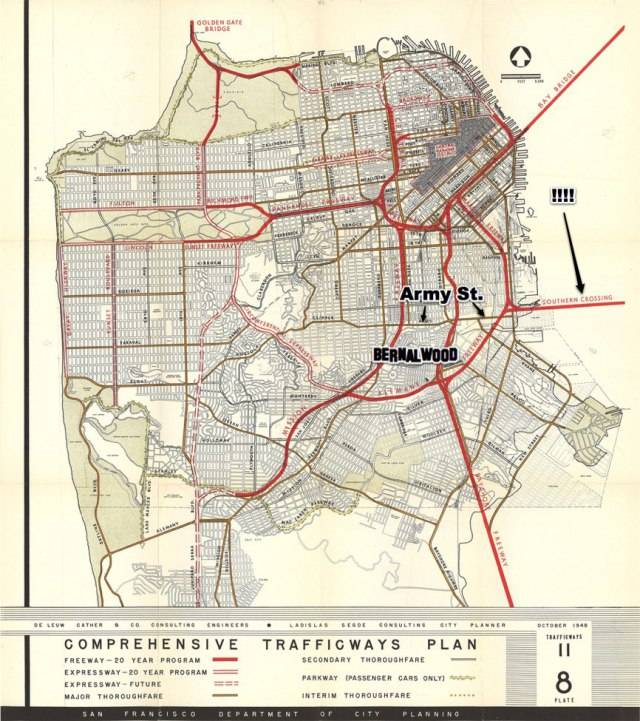 Check out the Army Street detail: 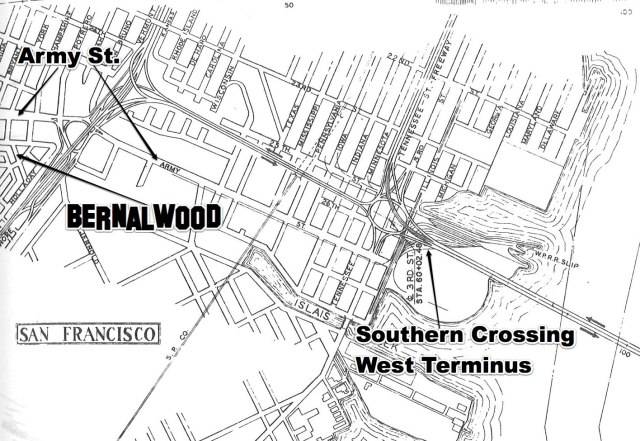 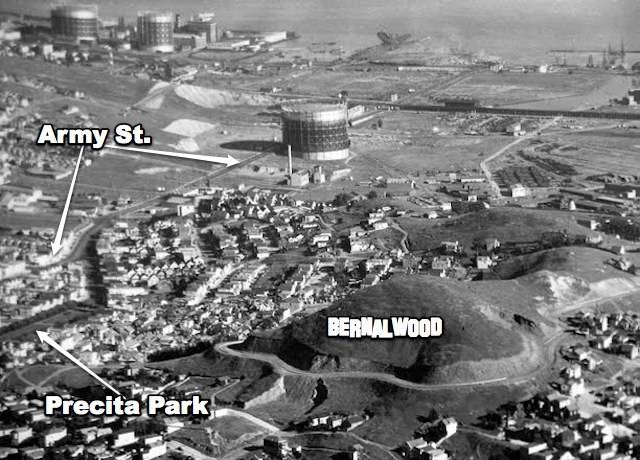 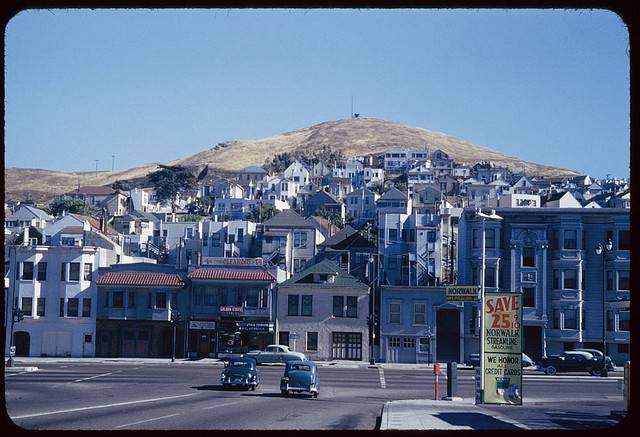 1950s: US101 converted from Potrero Avenue/Bayshore Blvd. routing to the elevated limited-access freeway. A roundabout under the Freeway connects Army, Potrero, and Bayshore. 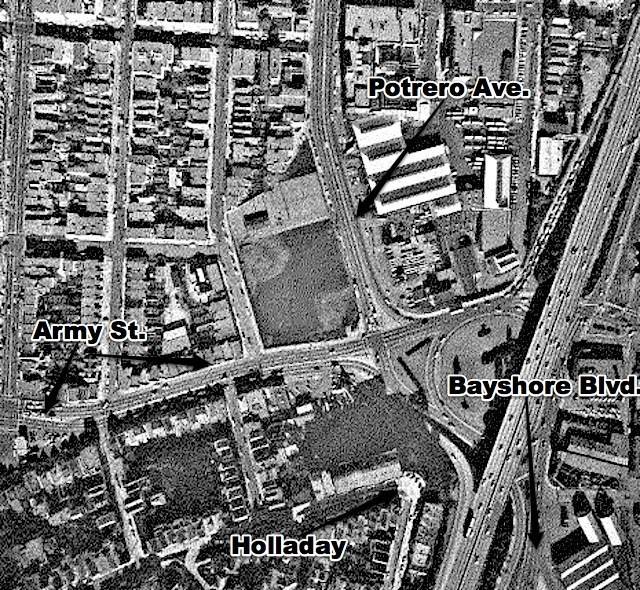 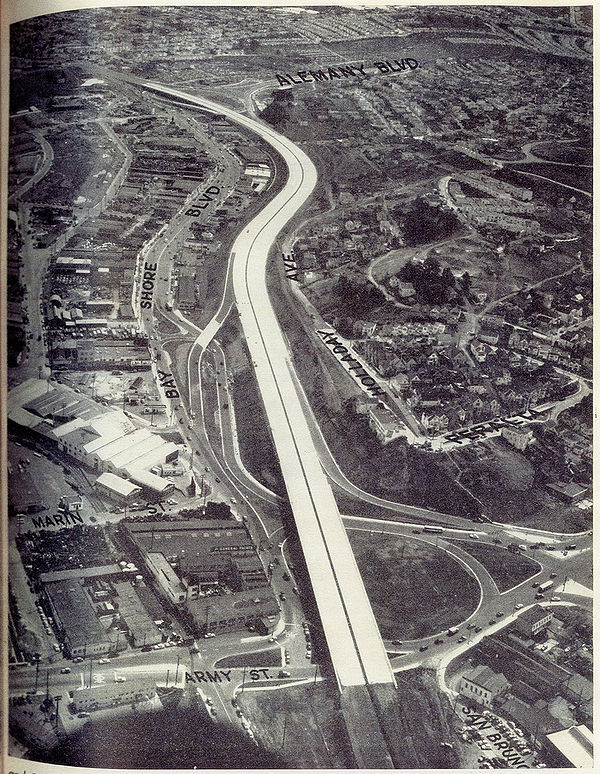 1968: Steve McQueen begins iconic “Bullitt” car chase on Army Street at Bryant in Bernal Heights. Location looks just as unpretty then as it does today. 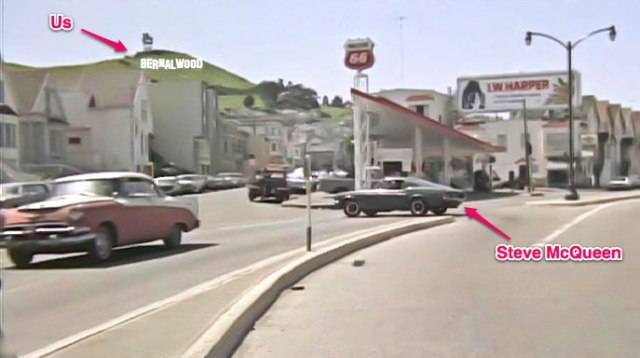 1970: San Francisco Chronicle declares “Southern Crossing Should Be Built,” arguing in favor of a “missing link the Bay Area’s traffic system” that would carry 36 percent of all transbay traffic to San Francisco, diverting 45,000 vehicles a day from downtown.

1971: Even after most other San Francisco freeway projects have been abandoned, California Freeway Planning Map still shows proposed Southern Crossing: 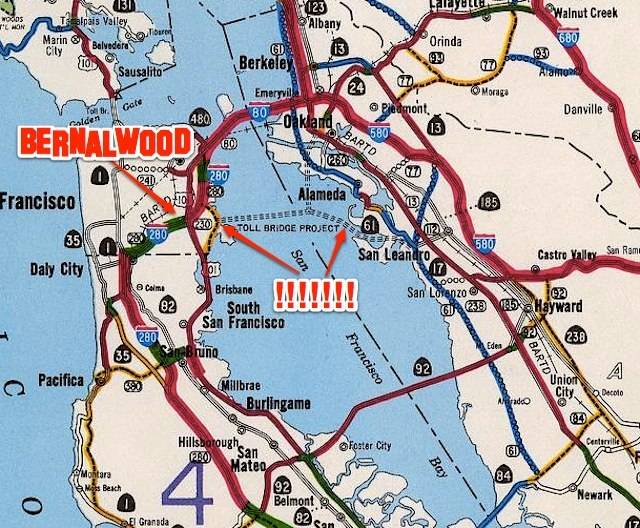 1973: Army Street/US 101 Spaghetti Bowl interchange built, replacing the roundabout that previously linked Army with Potrero Ave. and Bayshore Blvd. The new interchange was intended in part to serve traffic coming from and going to a future Southern Crossing: 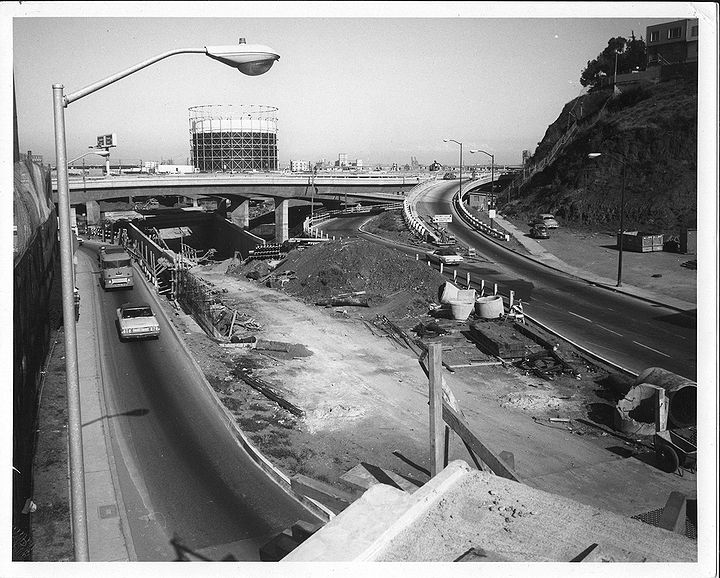 Late-1980s: No means no. Another proposal to build a Southern Crossing dies amid widespread opposition from environmentalists. 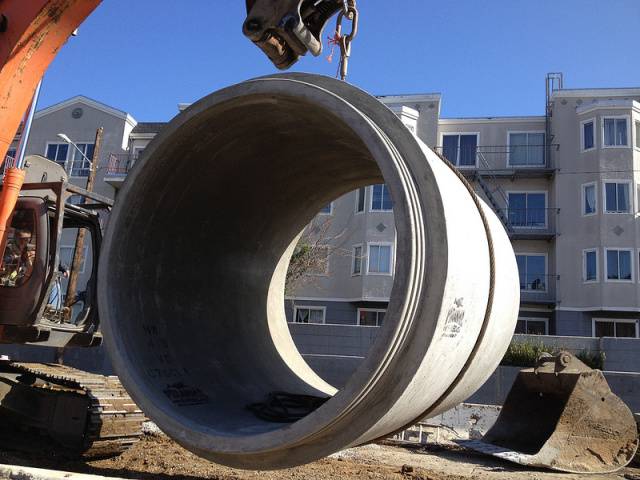 2013: Work begins on Cesar Chavez Streetscape improvements intended to strike a better balance between cars, pedestrians, bikes, and adjacent neighbors (not necessarily in that order). When finished, the basic configuration will look something like this: 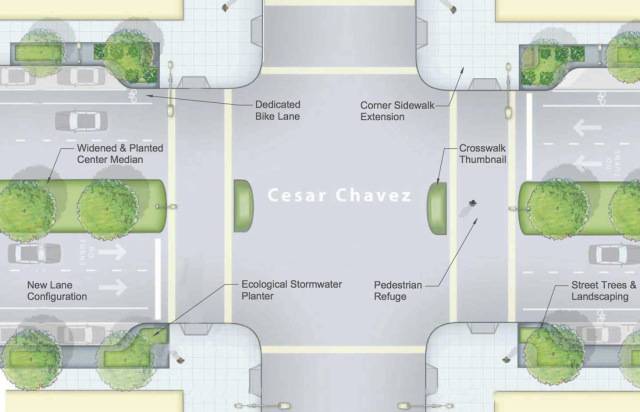 So there you have it.

Looking back on the last 80 or so years, the unifying thread in Army/Chavez history is that, first and foremost, the street was intended to serve as a high-volume route within a regional transportation plan that envisioned freeways and a future transbay bridge as its core elements. Like Precita Creek that runs underneath it, Army/Chavez was designed to carry traffic flowing from Twin Peaks eastward toward the shoreline of the Bay.

In that sense, the conspicuous ugliness of Army/Chavez is simply part of its function, because it was designed serve as a backbone of a car-centric vision of what San Francisco’s future required.

For a whole host of reasons, that’s not quite how the future turned out. So now — at last! — Cesar Chavez is being reimagined around a different vision for a different kind of future; a future in which Chavez continues to serve as an important artery, while also doing more to serve the neighbors who use it and live near it.

Of course, that may or may not be how the future actually turns out. So check back with again us in 80 years for another retrospective. 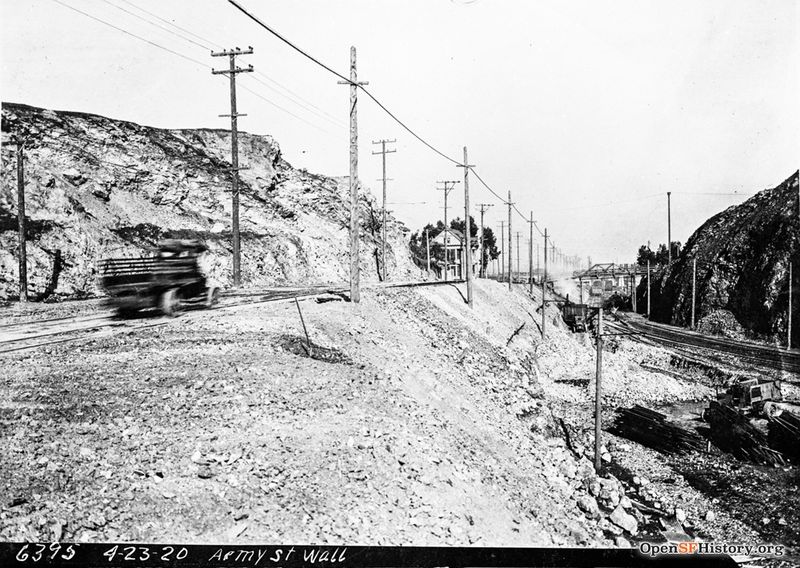 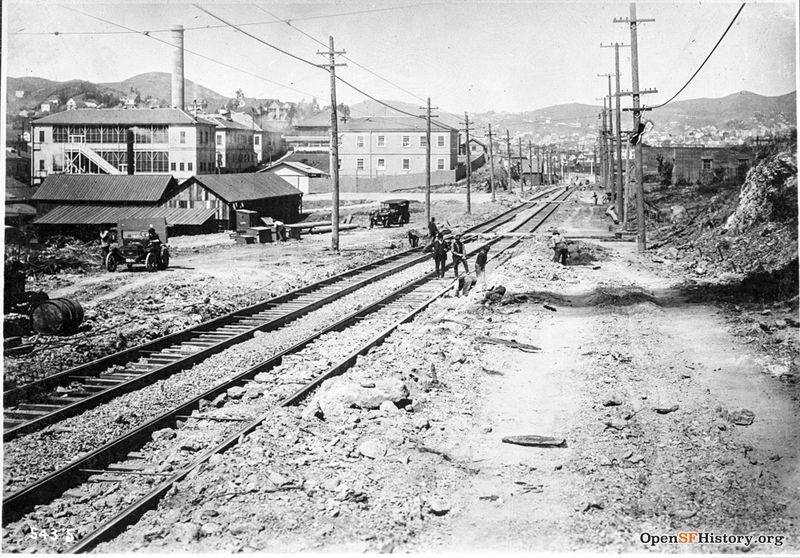