APOCAPOLITICS IN PRACTICE: THE END OF THE WORLD'S FAIR 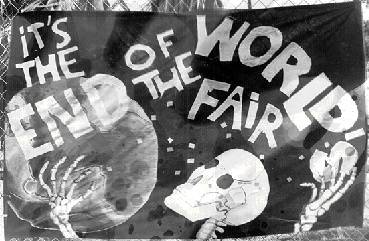 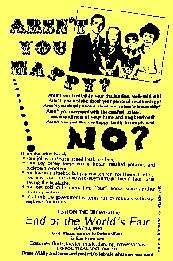 President Reagan has been musing about the end of the world, a biblical Armageddon foretold by theologians, but said in an interview he wouldn't give up even if the end were near ... in an interview in the December 26 issue of People magazine. (Associated Press)

The End of the World's Fair was a different take on the apocalyptic expectations that were rife in the early eighties. Rather than justifying internal repression and war fever, it was to act as a catalyst to release the furies of fear, paranoia and vengefulness in a ironic/punk ritual of death, an outpouring of human energy , ending in a celebration of life. The end of the world could turn out to be a rebirth, the end of the world merely AS WE KNOW IT. It was conceived as an event whose energy would spill over into other actions, indeed into daily life, hopefully to crystallize disparate manifestations of creative/rebellious action.

Seven people came to the first meeting and agreed to circulate a rip- roarin' bizarro brochure describing the concept of the Fair and to have a New Year's party to get things off the ground.. PROCESSED WORLD lent its office space for meetings, graphics, typesetting and telephone. ... it was difficult to attract a dedicated core group, people without prior commitments, before the event seemed real. He began working frantically copying, mailing, phone calling, and cajoling people to get to work on something. A group began to meet every two weeks, trying to set a date and a site, issue a press release, figure out a finance plan. ... As new people began to join in, the Fair-ies had a special potluck meeting to discuss a new brochure. The Kid had typed up some notes, suggesting political "points of unity," and linking the event to anti-war struggles. Some people from Processed World immediately savaged the idea of the Fair having a formal platform, political speeches or an issue-focus as a repetition of the same old boring, self-denying, single issue crap that the Fair originally rebelled against. The majority went with this view. The Kid suddenly saw the limits of his strategy-fantasy, fear running through him that he was a slapped-down minority once again. Paranoia aside, he realized that only a few could be expected to continue radical anti-war work after the Fair. Everything had to remain loose, contingent, open to the effects of big-world events.

But by February, a core group of neophyte organizers began to carry out the work of gaining permits, a stage , doing posters, fliers, budgets and benefits ... Lots of new people streamed into the Fair meetings by March. Crises continued, but momentum was evident in the benefits, leafletting, postering, the securing of stages and permits, contacting bands and so on. People began to give gifts: someone stitched a beautiful, colorful, quilt-like banner; others would design fliers for them; reports of floats, props and costumes began pouring in. Cool-headed angels would appear at moments of crisis and frayed nerves. While the response did not indicate anything on the order of a "political-cultural break," it became clear that "creative and rebellious approaches to political action" were weeds growing stubbornly in the cracks of bourgeois domination. These mutant political strains were obviously not going to disappear and many Fair organizers began to see the Fair as an affirmation of that community.

The organizing group reflected the variety of the San Francisco counter culture of the eighties, with politicos and artists, students and non-students and men and women in equal numbers, as well as its separations, never involving many lesbians, gay men or people of color. And despite the Fair's "punk" image in the left, very few people actively involved in the punk scene were in the group. This gap was made obvious in a visit by a Fair organizer to a meeting of East Bay "peace punks" at the invitation of Dan, who was trying to encourage them to get involved in something. But as it was extremely informal and very youthful, as much a social gathering as meeting, the Fair organizer, a veteran counter-culture radical, felt bewildered and out of place. He saw no "meeting," so he tried to announce the Fair, leaving some brochures behind. In San Francisco's anarchist scene, many identified the Fair with Processed World, which was then breaking away from the scene's more confrontational and individualist practices, earning them epithets like "Stalinist" and "social democratic" from the purists. The Fair's "punk" image led to a backlash among the organizers against the punk tone and the gallows humor. In later materials more emphasis was given to the celebratory, utopian side of the Fair. Special outreach was aimed at the punk scene, to local artists, to the "straight " Central America groups, and to the anti-nuclear activists clustered around LAG. Attempts were made to reach both the hard edges of the anarchist scene and the creative fringes of the mainstream groups, as well as anyone walking the streets in San Francisco.

THE DAY OF THE FAIR

The day of the Fair, weather was beautiful as several hundred paraders marched, skipped and rolled up Market Street and through the Mission District. A samba band and dance troupe joined in at the last minute, giving the parade its rhythmic backbone. Panting wage slaves pulled the "Prisoner of Daily Life" vehicle forwards, a Ronald Reagan clone shouted "Get a Job America," the Rube Goldberg-esque Amerikan Lobotomy Machine chugged ahead , piloted by the imitable Grimes Poznikoff, guided along by the "Thought Police" monitors. Missile and TV heads abounded and the peace punks were there doing their screaming mobile "die-ins." Ladies Against Women were there, accompanied by Ned Shrapnel of the National Association of Grenade Owners, chanting "Mommies, Mommies, Don't be commies, Stay at home and fold Pajamies!" Two women came dressed as well-to-do cockroaches. "Well not only survive, we'll prosper," said one of their post-holocaust future, pulling a cigar out of her cash-laden pockets. "What are you symbolizing ? " a passersby asked the pair. "Nothing," said the other, adjusting her fur collar. "We're into survival." The Kid march with the burned out leftists contingent, carrying a sign that read FUCK THIS SHIT-- I'M GOING TO LAW SCHOOL.

The Fair itself drew a crowd of 3,000, clustering around three different stages where comedy, theater, dance and poetry were performed, as well as Brazilian jazz, reggae, folk, rock, African highlife and of course punk music , played by MDC and Frightwig. Although there was one main stage, the event had a multiplicity of focuses, like an animal petting area for children and a circle of jamming Samba musicians surrounded by ecstatic dancers. Although the organizers wrote a statement of purpose on the program, they refused to define themselves via political speeches. Performances of different kinds were what communicated. The post-holocaust fashion show gave participants their 15 seconds of fame and people mingled , jammed danced , ate and talked all day. It was both a meeting of different political communities and a common ground where those who might not define themselves by "politics" could encounter these communities .