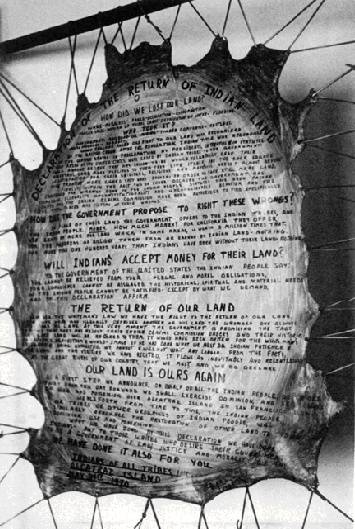 The proclamation of the Indians of All Tribes who occupied Alcatraz from November 1969 to June 1971:

To the Great White Father and All His People:

We, the native Americans, re-claim the land known as Alcatraz Island in the name of all American Indians by right of discovery. We wish to be fair and honorable in our dealings with the Caucasian inhabitants of this land, and hereby offer the following treaty: We will purchase said Alcatraz Island for 24 dollars in glass beads and red cloth, a precedent set by the white man's purchase of a similar island about 300 years ago. We know that $24 in trade goods for these sixteen acres is more than was paid when Manhattan Island was sold, but we know that land values have risen over the years. Our offer of $1.24 per acre is greater than the 47 cents per acre the white men are now paying the California Indians for their land. We will give to the inhabitants of this land a portion of that land for their own, to be held in trust by the American Indian Government for as long as the sun shall rise and the rivers go down to the sea -- to be administered by the Bureau of Caucasian Affairs (BCA). We will further guide the inhabitants in the proper way of living. We will offer them our religion, our education, our life-ways, in order to help them achieve our level of civilization and thus raise them and all their white brothers up from their savage and unhappy state. We offer this treaty in good faith and wish to be fair and honorable in our dealings with all white men.

We feel that this so-called Alcatraz Island is more than suitable as an Indian Reservation, as determined by the white man's own standards. By this we mean that this place resembles most Indian reservations, in that:

1. It is isolated from modern facilities, and without adequate means of transportation.

2. It has no fresh running water.

3. The sanitation facilities are inadequate.

4. There are no oil or mineral rights.

5. There is no industry and so unemployment is very great.

6. There are no health care facilities.

7. The soil is rocky and non-productive and the land does not support game.

8. There are no educational facilities.

9. The population has always been held as prisoners and kept dependent upon others.

Further, it would be fitting and symbolic that ships from all over the world, entering the Golden Gate, would first see Indian land, and thus be reminded of the true history of this nation. This tiny island would be a symbol of the great lands once ruled by free and noble Indians.

What use will we make of this land?

Since the San Francisco Indian Center burned down, there is no place for Indians to assemble and carry on tribal life here in the white man's city. Therefore, we plan to develop on this island several Indian institutions:

1. A CENTER FOR NATIVE AMERICAN STUDIES will be developed which will education them to the skills and knowledge relevant to improve the lives and spirits of all Indian peoples. Attached to this center will be traveling universities, managed by Indians, which will go to the Indian Reservations, learning those necessary and relevant materials now about.

2. AN AMERICAN INDIAN SPIRITUAL CENTER which will practice our ancient tribal religious and sacred healing ceremonies. Our cultural arts will be featured and our young people trained in music, dance, and healing rituals.

3. AN INDIAN CENTER OF ECOLOGY which will train and support our young people in scientific research and practice to restore our lands and waters to their pure and natural state. We will work to depollute the air and water of the Bay Area. We will seek to restore fish and animal life to the area and to revitalize sea life which has been threatened by the white man's way. We will set up facilities to desalt sea water for human benefit.

4. A GREAT INDIAN TRAINING SCHOOL will be developed to teach our people how to make a living in the world, improve our standard of living, and to end hunger and unemployment among all our people. This training school will include a center for Indian arts and crafts, and an Indian restaurant serving native foods, which will restore Indian culinary arts. This center will display Indian arts and offer Indian foods to the public, so that all may know of the beauty and spirit of the traditional INDIAN ways.

Some of the present buildings will be taken over to develop and AMERICAN INDIAN MUSEUM, which will depict our native food & other cultural contributions we have to given to the world. Another part of the museum will present some of the things the white man has given to the Indians in return for the land and life he took: disease, alcohol, poverty and cultural decimation (As symbolized by old tin cans, barbed wire, rubber tires, plastic containers, etc.). Part of this museum will remain a dungeon to symbolize both those Indian captives who were incarcerated for challenging white authority, and those who were imprisoned on reservations. The museum will show the noble and the tragic events of Indian history, including the broken treaties, the documentary of the Trail of Tears, the Massacre of Wounded Knee, as well as the victory over Yellow Hair Custer and his army.

In the name of all Indians, therefore, we re-claim this island for our Indian nations, for all these reasons. We feel this claim is just and proper, and that this land should rightfully be granted to us for as long as the rivers shall run and the sun shall shine.

(as published in The Movement newspaper, January 1970.)