AGAINST "Fairness" AND Fares! 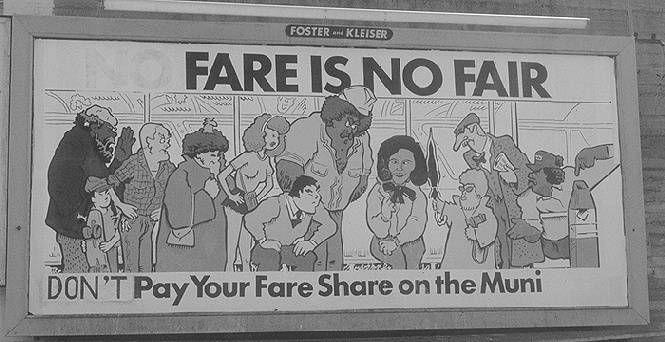 "No Fare Is No Fair" proclaimed the billboards sprouting all over San Francisco's streets and buses in the summer of 1983. In an absurd (and for all practical purposes ignored) attempt to turn "average bus riders" into vigilantes for the Municipal Railway, Mayor Dianne Feinstein launched a $50,000 public relations campaign to improve receipts for SF's beleaguered and underfunded public transit system. It is widely assumed that fare evasion has skyrocketed along with the more than doubling of fares in the past few years (from 25 cents to 60 cents). Though statistics aren't available, MUNI (SF Transit) estimates put unpaid fares at five million dollars each year. In the past two years, as the Financial District has exploded in size, more people have crammed on to the already over-crowded transit systems to get to work. A grassroots campaign to force large downtown employers to help pay for costs of modernizing and expanding public transportation in SF was approved by the Board of Supervisors in 1981, but vetoed by Feinstein. Other attempts to tap corporate coffers have floundered in the courts.

Mayor Feinstein had to develop other means of raising funds for public transit. The $50,000 publicity campaign indicates her strategy: appeal to middle-class sensibilities of "fairness" and civic responsibility and scapegoat the poorer people who have developed ingenious methods of fare evasion. Presenting fare payment as a civic responsibility reinforces widespread mystification about the primary function of public transit, and obscures the unequal benefits derived from it. The obvious primary beneficiaries are employers and merchants. The obvious function is to bring people to and from work and shopping. In S.F., as in many other cities, the public transportation system is designed specifically to facilitate commuting to the downtown financial district from any part of the surrounding metropolitan area, whereas routes which do not pass through downtown are far less available or frequent. Governments tax people to create transit systems (Dallas and Los Angeles are just beginning multi-billion transit systems at taxpayer expense). Then people have to pay again to use these systems, usually suffering incredible discomfort, degradation, and frustration waiting for and riding on the vehicles.

In fact, transit systems are the means of last resort for assuring a mobile workforce and mobile shoppers. The automobile culture has served to thoroughly transfer costs of mobility to individuals in the form of car, gas, repair payments, and highway taxes. The transit system serves as a backup for millions, and as a primary means of commuting only for those who cannot afford a car, or parking ...

Commuting itself represents a transfer of costs, too. Business could not function without workers coming to work, hence commuting is actually a crucial part of the workday. But capital doesn't pay the cost of that mobility; instead workers pay to get to work, increasing both their own cost of living and the rate of profit for business, as a cost of (re)production becomes part of the "cost of living." The owners and managers who benefit the most from the transit system's function, already faced with declining profit rates, refuse to acknowledge this underlying reality. As a result, they won't pay for the transit system, and the paid workday begins when you enter the office or worksite, not when you get on the bus.

A common form of fare evasion in San Francisco has been the use of expired transfers. SF MUNI attempted to defeat the recycling of flimsy newsprint transfers (good for unlimited rides in any direction except reverse) by developing a new, random and unpredictable symbol/number coding system. Whereas people had been saving transfers for use in the following months (the old system merely had numbers matching the date without any indication of month) and could eventually gather enough transfers to cover any ride in any direction on any date, and never pay again, the new system required a transfer matching the day's code and color. This new system has made it harder to "abuse" transfers, but not impossible.

The transfer system requires bus drivers to scrutinize transfers for date/time validity. Luckily a large number of SF bus drivers refuse to play cop, and generally avoid taking a close look at transfers. As a result, expired transfers are usually easy to use. It is also possible for people to pass on valid transfers to waiting riders as they get off the bus.

Equally dependent on vigilant bus drivers is the use of the monthly "Fast Pass," good for unlimited rides in any direction on SF MUNI. Four years ago [1979] Fast Passes cost $11/ month, then they were raised to $16 and now they cost $24 [1997 cost is $40]. The new Fast Passes were also redesigned with a magnetic machine-readable strip for use in computerized fare gates in the underground Metro/BART stations downtown. But for the majority of rides, Fast Pass use still consists of showing it to the driver. As a result, uncoordinated counterfeit Fast Pass circles have sprung up (usually among small groups of friends), depending largely on the use of color xerox machines. These machines create a reasonable facsimile of the original, though since MUNI started using hard-to-color-xerox colors, they often require some additional color pen or pencil touch up. Xerox Fast Passes cost about $1 each instead of $24.

Another favorite and easy form of fare evasion is paying in numerous small coins, not adding up to the full fare (e.g. 40 cents in nickels instead of 60 cents). Of course no driver can count the jumble of coins as they clatter to the bottom tray of the fare box -- many don't even try. A vacationing family from Spain using this method never once paid full fare during their recent trip to SF, and once were given good transfers to replace expired ones by a sympathetic driver. Yet another technique was tearing dollar bills in half and crumpling them up and dropping in only 1/2 for each ride across the Bay.

A local investigative journalist, Tim Redmond, has pointed out in his Bay Guardian articles that if the MUNI estimate of annual losses of $5 million is correct, then there is an average of 16,000 fares evaded weekly, or $100,000 per week lost (or saved, depending on how you look at it).

AC Transit, which serves over a million people in the eastern areas of the SF Bay, has spent several million dollars during the past two years to install computerized fare boxes. These new machines give the driver digital readouts of how much money was dropped in the box, and require the face-up feeding in of dollar bills. While the investment in these boxes probably far exceeds any actual losses due to evasion, they have been specifically installed to eliminate the aforementioned and other forms of cheating. Methods of fare evasion that worked in the old open top fare boxes are impossible now.

The new computerized fare boxes are not presently adapted to accepting the magnetic-strip monthly passes, but presumably they will be adjusted to do so later. For the time-being however, human enforcement in the form of driver scrutiny is still required to assure proper fare payment in the monthly pass system on both major transit systems in San Francisco and the East Bay.

Full scale computerization of the Bay Area Rapid Transit (BART) system seems to have defeated most of the common forms of fare evasion. The rider buys a computer ticket from a machine in the lobby, and the fare gates read its magnetic strip to charge the passenger for the ride. Most transit systems in the U.S. only require fare payment up front to get in, but no further examination or authentication of payment occurs past the initial fare box. But BART monitors passengers at both ends, charging different fares for different distances, and requires computerized reading of the ticket at both ends of the ride in order to assess the correct fare.

In spite of this increased control, fare evasion has flourished on BART and has spawned its own publicity campaign with threats of jail and $50 fines. The method used, again, depends on human, not computer controls. Disabled and seniors are entitled to purchase special discount tickets at banks and certain offices a $10 ticket costs only $2 with disabled or senior identification cards. Naturally a black market in discount tickets has sprung up, since the machine cannot tell what kind of person is using a special discount ticket. Statistics aren't available but the investment in the publicity campaign alone is several thousand dollars, so clearly the transit authorities feel threatened. [In late 1999 BART machines stopped accepting $20 bills because people had found ways to fool the ticket machines with fake or partial bills; by March 2000 most machines were fixed to eliminate this problem.]

Another increasingly common sight on Bay Area transit systems is the camera continuously videotaping the passengers on a bus, in a station, etc. BART stations are famous for the closed circuit TV monitors in the station agent booth, where s/he can watch the entire station at once. More recently, MUNI and AC Transit have begun installing these cameras on buses, but since they scan back from the driver's partition they are irrelevant to the fare collection process. Their ostensible purpose is to "deter crime," but since many people don't believe they contain film, and if they did, it would be too labor-intensive to actually look at all of it, they are of dubious use.

The role of new technologies has proven to be rather ambiguous in the ever-simmering battle over fares. While improvements in rapid reproduction technologies (color xerox) have given fare evaders an important tool in circumventing the payment system, computerized fare processing has generally served the authorities well, at least so far. It is equally clear, however, that magnetic media too can be duplicated, and as such technologies become more available and better understood, new methods of counterfeiting will develop. Some closet technologists have suggested the possibility of duplicating the magnetic stripe with regular recording tape after analyzing the electronic impulses recorded on tickets with a tape recorder. Ultimately, human control over the information about how the computerized systems work is the Achilles Heel of these "foolproof" methods of fare collection.

When the concept of "fairness" is used around public transportation, the only sensible interpretation for most of us is to demand that all public transit be made free to the users. The fact that the individual can occasionally use the system to visit friends, or for other private purposes, is the sole benefit for the average person. Let the real beneficiaries, the employers and merchants whose abilities to make profits depend on the existence of working public transit, pay the full costs of creating and maintaining these systems. And while we are at it (short of the abolition of wage-labor), let's demand to be paid for the full working day, including the hours of our lives wasted on public transit. Commute time is work, and it's time the employer paid for it!

P.S. to transit workers: The next time you're fighting the transit authorities and want to press grievances or wage demands or anything in a direct and powerful way, take a hint from the bus drivers in Milan, Italy, who have successfully used the strategy of keeping the transit going (thereby serving popular needs) but have refused to collect fares. Such a social strike can bring the managers to their senses much faster than any traditional strike (it will also generate a lot of popular support) . . . Warm regards to all you who "neglect" to enforce the cash nexus on your vehicles.