“What we’re for and not what we’re against” was the rallying cry of the punks, artists, and activists that came together in spring 2001 to take over a long, abandoned Market Street pool hall. We turned an enormous, dusty, forgotten building into a community space that in its four-month-long existence was part art gallery, part rock club, and café with a free breakfast program. 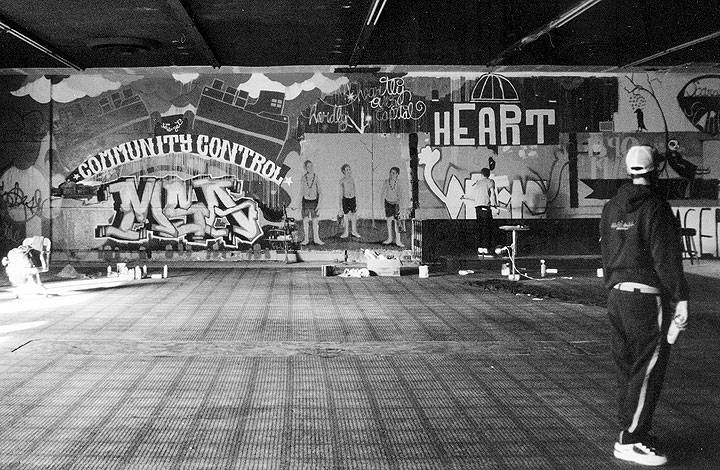 Interior of 949 Market during its thriving months as a free space.

The birth of the 949 Market space came at a rare time in the city’s recent history, a brief break between battles. After the dot.com crash and before the permanent war, twenty-five or thirty veterans of the Mission’s battles against gentrification got sick of their community always being under attack and always organizing to resist whatever crisis was next. We decided instead to not fight against something, but to build the world that we wanted.

In the vast, empty space we found when we opened the squat, it was possible to imagine anything happening, right there, hidden in plain sight just a block from tourists shopping and riding the cable cars. We thought, “What if you just had all the space you needed to do whatever you wanted? What would you do? What would it look like?” 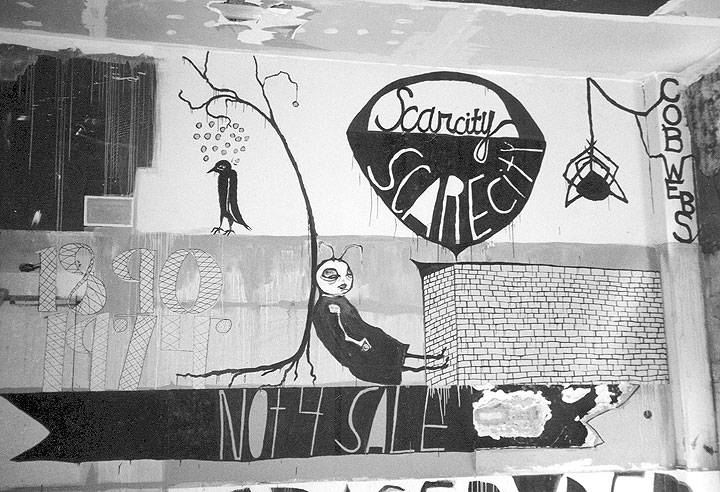 First we cleaned and planned. Committees formed to clean up the dust and debris that accumulated in the former Palace Billiards since it had closed in 1988, and to talk together about what kind of events we wanted to have happen in the space. We decided to have one huge show with art, music, speakers, and free food. Different artists came to the space to plan huge murals together, all loosely based around the theme “What we’re for and not what we’re against.” For a whole month, we cleaned and painted and explored the building’s premises and the abandoned St. Francis Theater next door, trying to build a perfect show space out of the rubble. All the stuff we needed from the popcorn buckets in which we would later serve the vegan dinner, to the theater’s old sound system speaker (which we used for the show’s PA) we found right there.

Working on the space at 949 Market had that same exciting, unpredictable energy that the early MAC times had. My favorite memories are of what it felt like to walk into the squat as we planned the opening night show and see people spread out across the room, carefully painting murals or nailing movie seats into the ground where the films would be shown, or trying to figure out how to rig up water for the toilets.

On March 30, 2001, we finally had our “Grand Opening Night” for the space. An estimated 600 people showed up on a Friday night on Market Street to see four bands, speakers, and some films and to eat a free, vegan dinner. But the real show-stopper was the art itself. When you walked up the stairs off of Market you’d enter this enormous room, covered from floor to ceiling for hundreds of feet with big, colorful murals, flowing into each other.

We counted on the event’s sheer size to keep cops away. After all, how could 600 people be attending a free concert right on Market Street with all this artwork in it without permission? When we turned out to be right and the event went off without a hitch, we started planning for more events. 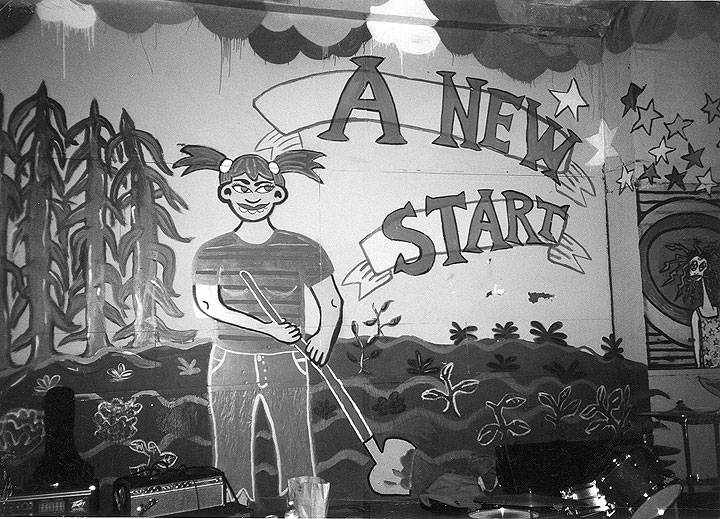 Next, we started a weekly breakfast café in the squat, because we felt that people really needed a calm, beautiful place where they could come together and eat free food. A different group of people than those who had been in charge of the first show came forward to run the café. Food pickups were organized. Restaurant equipment was, uh, appropriated. The group did outreach to homeless folks in the neighborhood and invited them specifically to come and eat and chill out at the space (while also making sure to inform them that it wasn’t quite legal).

There were several more shows and several weeks of free food before the space was evicted, uneventfully, when it was discovered by workers hired by the building’s owners, one morning in June. It was heartbreaking to lose the murals, the results of months of hard work, and, for me, a place to live. But after being on the losing end of several electoral campaigns over the years, I realized what was different about 949 Market. When we lost an election, it felt like we had lost everything. When the squat got busted, it still felt like we had won something. Instead of finding a candidate to elect and hoping that they would represent our interests in office, this could be a first step in organizing in our own interests and creating a community strong enough that the candidates would have to come to us. 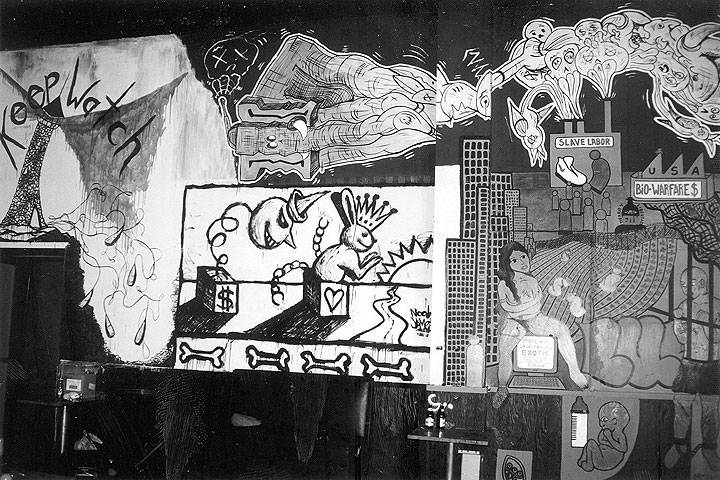 Beautiful murals adorned the walls of 949 Market while it was occupied.

This is excerpted from an essay published originally as "On the Lower Frequencies: Life in Abandoned San Francisco" in The Political Edge ed. Chris Carlsson (City Lights Foundation: 2004)
Retrieved from "http://foundsf.org/index.php?title=949_Market_Street:_Life_in_Abandoned_San_Francisco&oldid=22777"
Share this page: