republished from Pueblo Lands (a blog about the Political economy of the San Francisco Bay Area and Beyond), Oct. 2013

You would think that with four months' time the media would have drilled down to the real stories underlying the BART strike. For four months negotiations between the Bay Area Rapid Transit District and its employee unions boiled, culminating in two strikes. Given that the struggle was very much about money, you would think BART’s finances, its biggest sources of revenues and expenditures, would have been put under a microscope by the press. And after the tragic deaths of two workers you would think the safety issues raised by the unions would finally have their day before the court of public opinion. 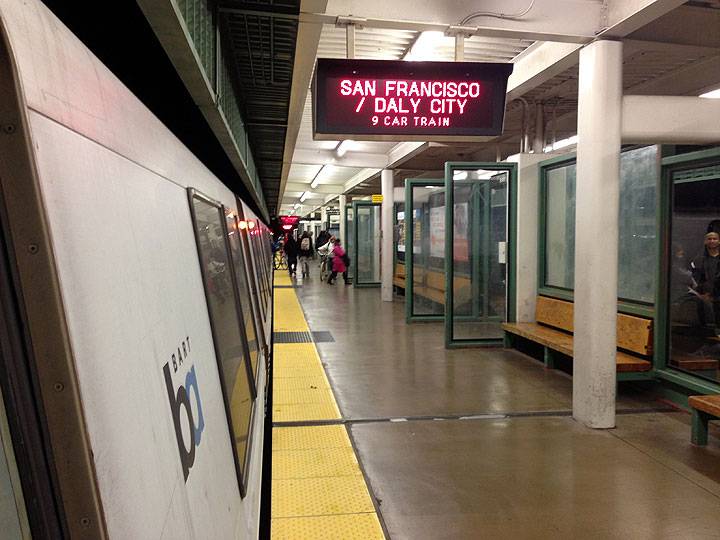 Over the past four months the Bay Area’s major newspapers fixated on one narrative over all others: the inconvenience to commuters caused by the two shutdowns, a four day strike in July, and another four days in October. When the big newspapers and TV stations weren’t running the latest tale of commuter outrage, they busied themselves by attacking the unions. It was unabashed.

At the height of the strike on October 19 the San Francisco Chronicle’s editorial page editor John Diaz made it clear where that newspaper’s leadership stands by writing, “strikes shouldn’t be legal.” Diaz used the muscle of the biggest newspaper in northern California to demand that the legislature ban transit strikes across the entire state.

When the strike ended on October 21 the Oakland Tribune’s editors accused BART management of selling out rides and taxpayers. In a tone of outrage the paper’s editors wrote that BART managers have “no backbone,” even though they pursued a dangerous strikebreaking strategy that appears to have led to the death of two workers, run over by a train being operated by non-union drivers.

Four months of strife and struggle, and at the end of it the Bay Area’s major news outlets have little to show except a flood of stories about inconvenienced commutes. The public is nowhere closer to understanding the very real problems facing the BART District and its workforce. It was an opportunity for deep reporting mostly squandered.

When the press and TV stations did focus on the details of the contract proposals they jettisoned their critical thinking capacity, and chose instead to parrot figures handed them by both the unions and management. The result was that virtually every report claimed that the unions were seeking a whopping 21 percent raise from the start. They weren’t. In the end the San Francisco Chronicle and Oakland Tribune reported misleading figures as to the salary gains sought by the unions. The day the strike ended the Chronicle claimed that the unions won a 15.4 percent pay increase, and the Tribune wrote that “[BART] employees, already among the best-compensated transit workers in the nation, will receive a stunning 16.4 percent raise over the next four years.”

Stunning, hardly. Neither of those reports is accurate, or in context. The context is that BART’s workers gave up pay increases in 2009 and handed over $100 million in concessions to the District. The pay raise BART employees just won is largely designed to sustain their real take home pay against inflation. In the Bay Area the cost of living has exploded over the past ten years. This year alone home prices shot upwards of 50 percent in many towns and cities in Northern California.

What did the major dailies and TV stations omit from their reporting? Four months of strife and struggle around the Bay Area’s multi-billion dollar transit system that has created hundred of billions in real estate wealth and re-shaped the racial and class demographics of Northern California, and out of this watershed moment pitting labor against the bosses the Bay Area’s news media have virtually no investigative or historical analysis to offer us.

The bigger media outlets could have reported on the means by which BART’s hundreds of powerful construction, and engineering contractors have ingratiated themselves with the BART board of directors and senior management. That story, begging to be told, digs down near the root of the problem. The problem is that BART management seeks concessions from labor in order to shift operating funds into the capital budget. Building out the BART system with new stations and new lines into the suburbs is politically popular, and it enriches construction companies, engineers, architects, and lawyers galore. But real estate owners, especially the commercial companies that own office properties around BART stations, have never paid a dime of their windfall capital gains into the system, leaving BART with a chronic revenue shortfall. So where to get the money to expand the system? That’s what the District’s hard bargaining with its employees is ultimately about – reducing employee pay and shifting those dollars into the capital budget. 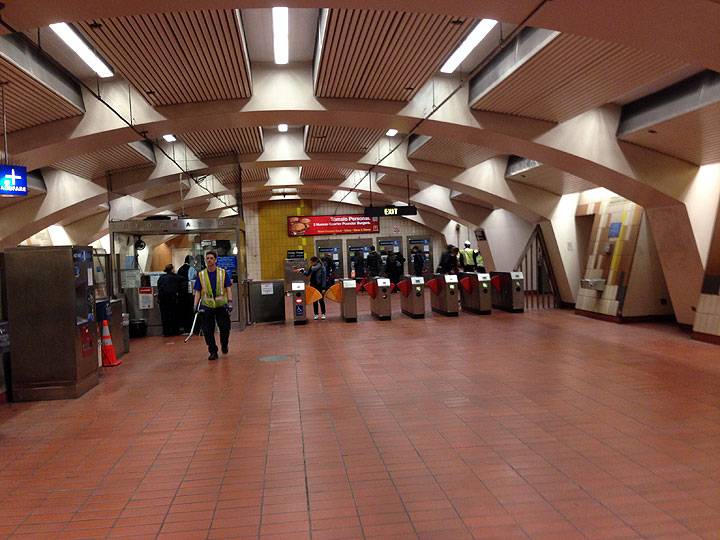 BART’s contractors, and the real estate owners who have profited handsomely from the District’s public investments, are giant companies, so reporting on their interests, and the means by which they milk BART would mean taking on powerful foes. It’s also a complicated story requiring more than just sound bites to report.

Maybe that’s part of the reasons the dailies and TV stations didn’t give it a shot over the past four months? There have been some attempts to map the complex ecology of BART contractors and real estate developers, their financial linkages, their political alliances, their slush funds, the friendships and favors connecting them to BART management. Zusha Elinson’s recent stories come to mind as good journalism.

Back in 1996 the Chronicle and Examiner (the latter newspaper has since been turned into a tabloid with a skeletal staff) extensively reported on BART’s corruption at the highest levels. BART Board President Mike Bernick was investigated by the FBI, and his predecessor Margaret Pryor was fined by the FPPC for hiding political campaign contributions from BART contractors. (Pryor never paid $53,000 in fines, according to the FPPC.) A lot of the dirty laundry got aired, and the public got a better understanding of how BART works on the inside.

But in recent years the investigative spirit of the Bay Area’s newspapers has been replaced by a languid conservativism. Top editors at both papers are anti-union, and some even sit on the boards of business lobbying groups that don’t like the boat to be rocked. As for the newspapers, their own boats got capsized not too long ago.

Both the Chronicle and Tribune were battered by the downsizing of the print industry in the late 1990s and 2000s. By the time the Chronicle ended up in the hands of the Hearst Corporation it was already running on fumes from its evaporated advertising base. Hearst Corp gutted the newsroom once and for all in 2009 when it fired around 200 staff. That was most of its reporters at the time. The place has never recovered, and its top editors and managers have only dragged the paper further to the right ever since. Nowadays half the content in the Chronicle and its online web site SFGate is advertising posing as news, or syndicated content produced far away with little relevance to the Bay Area.

Being owned by the Hearst Corporation certainly has its influences. Hearst, a closely held private corporation, still majority owned by the descendants of William Randolph Hearst, is an anti-union company. Hearst Corp also owns real estate in downtown San Francisco, putting the Chronicle’s parent company squarely in the corner of the property owners who have a financial interest in squeezing the BART system’s workforce for every penny they refuse to pay in real estate taxes. Hearst owns two office towers just blocks from San Francisco’s busy Montgomery Street Bart Station. Both properties are worth millions more just by the fact that BART can bring workers from miles around to their doorsteps. Hearst also owns the Chronicle building on Mission Street, and six other major parcels in San Francisco’s SOMA district, according to Assessor’s records. In sum, the Chronicle is a little newspaper subsidiary of a major real estate owner in downtown San Francisco. Because Hearst is private we have no idea whether the real estate brings in more cash than the newspaper these days. It’s anyone’s guess.

Other news media are connected directly to San Francisco’s conservative business community in ways that may have colored their coverage of the BART strike. For example, KPIX, the local CBS affiliate in the Bay Area, gave the BART strike extensive coverage, fixating especially on the inconvenience the strike caused for commuters. After the first strike in July, KPIX sponsored a poll that was widely circulated showing little public support for the workers. The poll may or may not have accurately reflected public sentiment. It surely took considerable resources for the news station to conduct it. What’s interesting is the overall editorial slant of KPIX, and how the station’s managers allocate resources, how they pick among the many worthy stories that should be told.

KPIX station manager, Bruno Cohen, is a longtime CBS executive who also happens to be on the board of directors of the Bay Area Council, San Francisco’s leading conservative business lobbying group. Cohen’s fellow board members at the BAC include Grace Crunican, the GM of BART, and Ted Fang, the publisher of Asian Week. Ted’s brother James Fang is an elected BART board member. The rest of the Bay Area Council’s board is stacked with representatives of businesses and law firms that have taken millions from BART over the years, all through contracts approved by Crunican, James Fang, and the rest of the District’s management.

Not coincidentally, during the first BART strike the Bay Area Council conducted its own poll showing, “overwhelming opposition to a BART worker strike.” The Bay Area Council then issued press release blaming the union for costing the regional economy $73 million for each day of the strike.