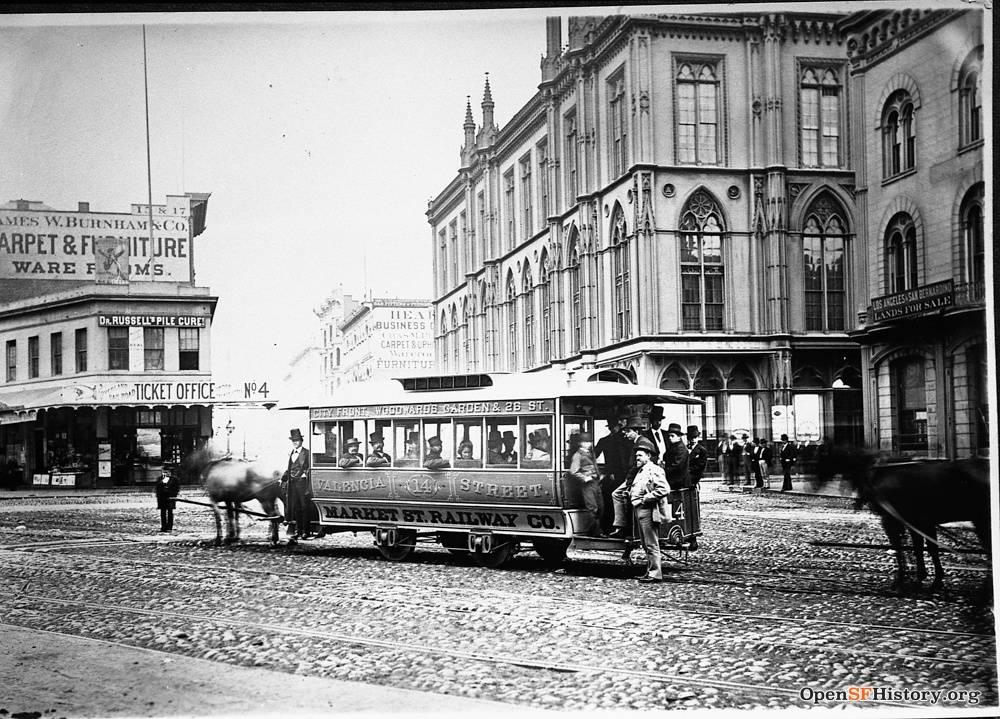 Horsecar #14 pauses at Post and Market on its way to Woodward's Gardens, c. 1875

The gradual extension of the living and working environment of San Francisco south and west into the Mission District and the Western Addition came with, and depended on, the construction of a network of transportation lines that rapidly connected the new areas with the central business district and the city to the suburbs. The Market Street Railroad dated back to 1857, and by the eighties numerous other lines flourished. The Hayes Valley line connected the growing Western Addition to the central business districts, and the Potrero and Bay View line allowed workers from south of San Francisco to commute to the industrial district in the Potrero, to adjacent Butchertown, as well as to the South of Market and waterfront areas. Both these lines belonged to the Market Street system. The Omnibus Railroad Company gave passengers access to the residential parts of the Mission District as far south as Twenty-sixth Street, as did the City Railroad Company. Both the Central and the Sutter Street lines eased the trip from downtown San Francisco beyond Russian Hill and the Western Addition to the edge of the city’s built-up territory in the Pacific Heights and Presidio areas and helped make the areas along their routes desirable residential districts. Golden Gate Park could be reached by taking one of the cars of the Geary Street, Park, and Ocean Railroad, and for a five-cent fare riders could cross the business district on the North Beach and Mission line.(24) 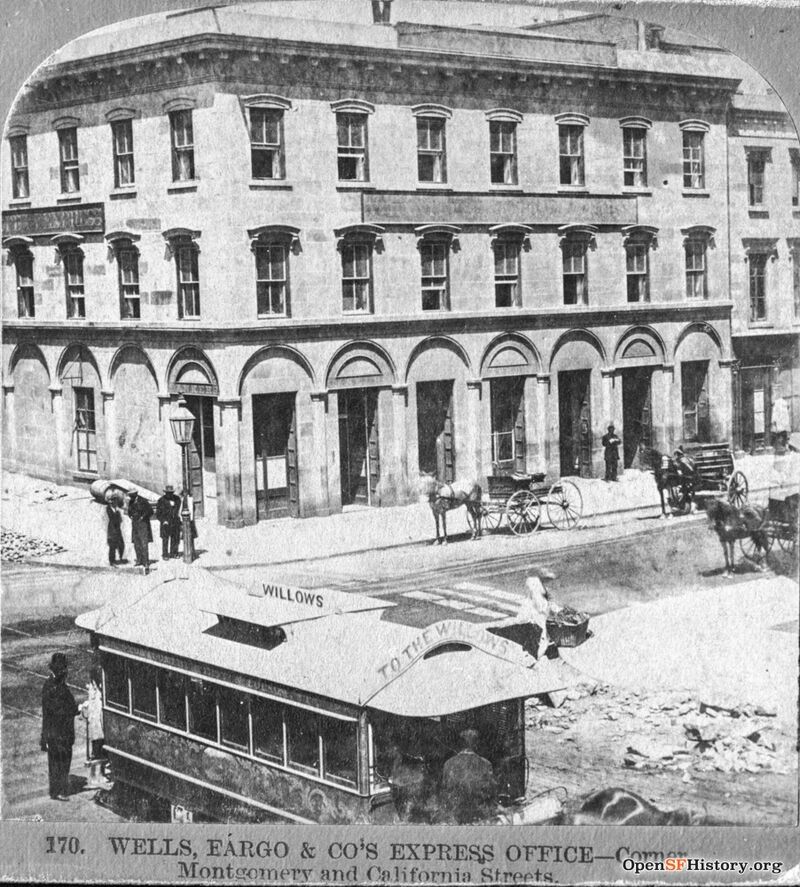 The city's streetcar lines all radiated from either the ferry slips, the Southern Pacific Railroad’s Townsend Street depot, the Pacific Mail Steamship Company’s wharf, or the steamboat landing at the foot of Broadway Street. These termini of both water-borne and land transportation bustled with passengers and freight activity and served to remind both residents and visitors of the importance of what Alfred Chandler has called the first modern business enterprise,” the railroad. In San Francisco, “the railroad” meant the Southern Pacific. “By 1877,” a University of California economist wrote in 1922, “the Central Pacific–Southern Pacific combination was in control of over 85 percent of all the railroads in California, including all the lines of importance around San Francisco Bay, except the San Francisco and North Pacific Railroad, and in the Sacramento and San Joaquin Valleys.”(25)

When James O’Leary, editor of the city’s Journal of Commerce, wrote his section on “money” for an 1891 book describing San Francisco’s leading entrepreneurs, he headed the list of millionaires with the names of railroad magnates Leland Stanford and Charles Crocker. Stanford and Crocker, together with Collis Huntington and Mark Hopkins, began their careers and their fortunes outside San Francisco, then transferred their business headquarters and homes to the city. All four had been moderately successful Sacramento merchants when approached by Theodore Judah in 1860 for support of a transcontinental railroad. Rebuffed by more conservative San Franciscan investors, Judah hoped to tie the country together with steel rails. With the Civil War suggesting the need to connect California to the Union cause, Judah found success in the form of a congressional subsidy. Whereas Judah had pursued a vision of national unity, the Big Four were driven primarily by dreams of the commercial gains possible by means of a rail connection to the Mother Lode. Only later did they sense the potential bonanza of the transcontinental trade. The Big Four used the massive federal subsidy and a small initial investment of their own to eventually seize control of the transportation for virtually the entire Pacific Coast. In 1873 they moved their company headquarters to San Francisco, and Crocker, Hopkins, and Stanford moved to the city, where they built elaborate mansions atop Nob Hill.

Leland Stanford, most visible of the four, held the presidency of the railroad for twenty-eight years and also served briefer periods as governor and a U.S. senator. He and his wife Jane erected Stanford University as a memorial to their son, endowing it with the Stanford fortune. Huntington, reputedly “the brains of the group,” moved to New York, coming west only twice each year and finally buying a modest (and rarely used) Nob Hill mansion in the 1890s. A cynical, tight-fisted, tenacious Yankee who acquired eastern railroad interests in addition to his western holdings, he maneuvered Stanford out of the presidency in 1890 and grabbed the office for himself.